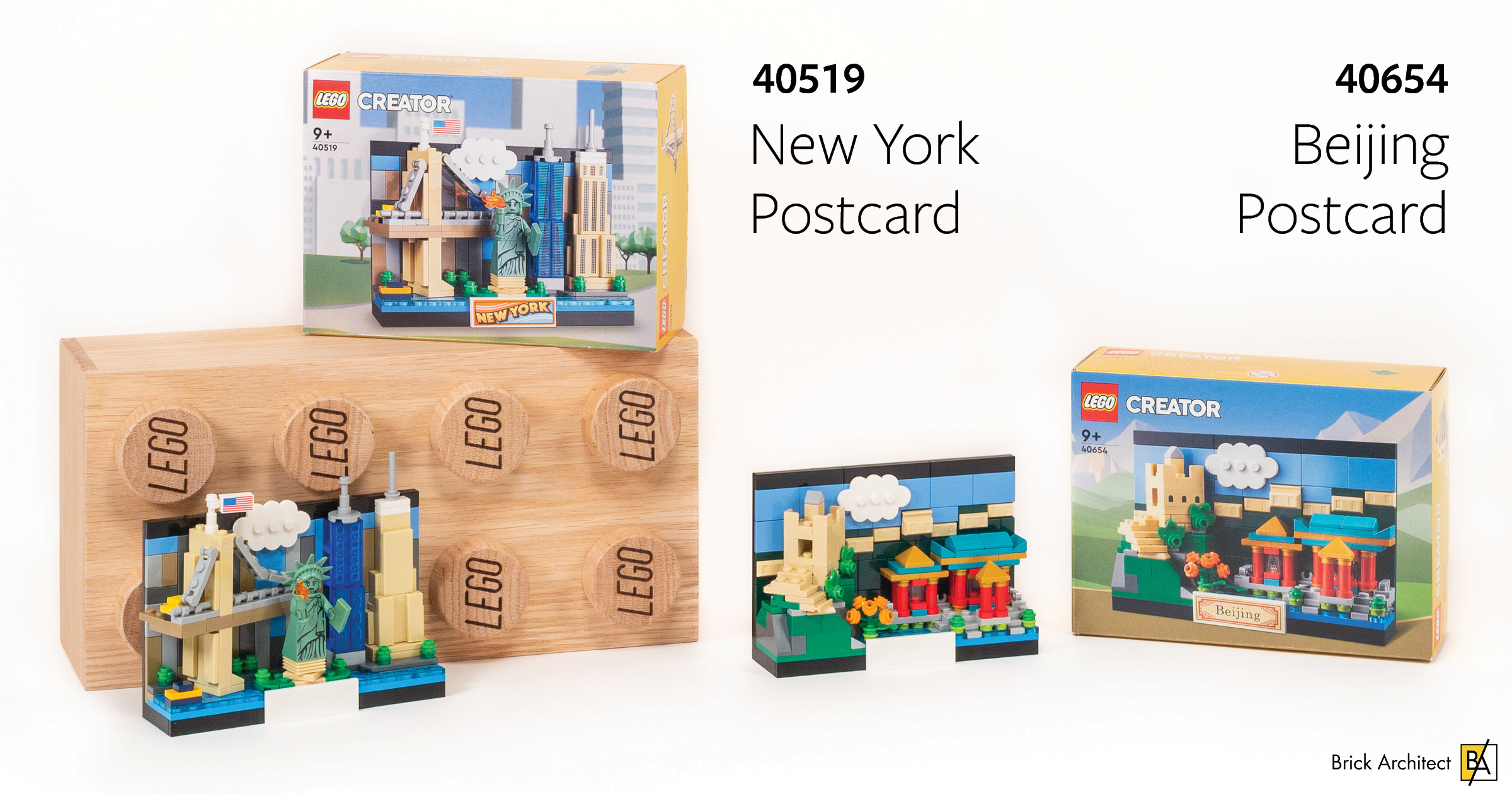 Let’s take a closer look at these brick-built souvenirs. I see them as a playful re-interpretation of the LEGO Architecture Skylines series — but for a younger audience!

To be honest, my immediate impression of these sets was negative because they offer a lower level of detail and a more casual composition than those sets in the LEGO Architecture Skyline series. On a deeper look a different impression arose – that these are clever “baby skylines” for a much wider audience than the 18+ (Adults Welcome) sets. 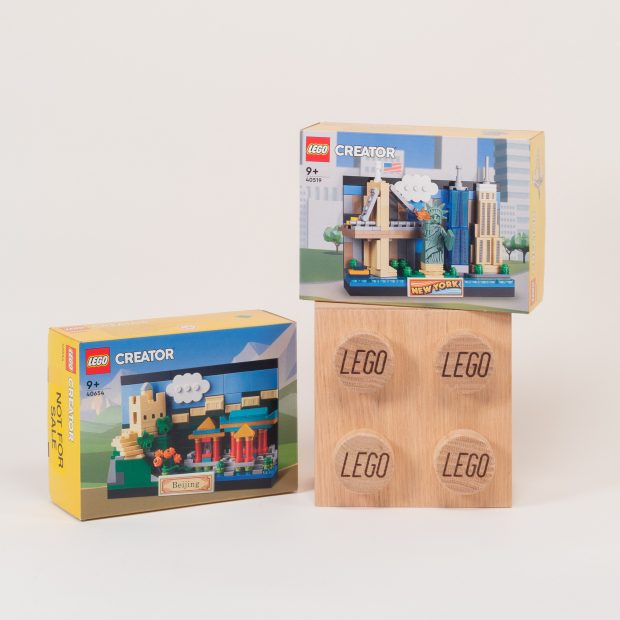 The completed models have a similar aesthetic to a brightly colored vintage postcard that was re-interpreted as a pop-up card, with a row of primary foreground elements placed in front of a simple brick-built backdrop. They rely on stickers which I really do not prefer, but it is pretty common for this price point and for the Creator series as a whole.

Both of the sets come in relatively small boxes with taped ends and a 9+ age recommendation. Let’s get started!

Based on the box front alone, it is easy to make out two skyscrapers, a bridge with an American flag on top, and the Statue of Liberty Minifigure in the front. Several sources indicate that it will contain 253 pieces, but I will admit that I didn’t bother counting (and the advance copy I received has EU packaging without the part count listed). 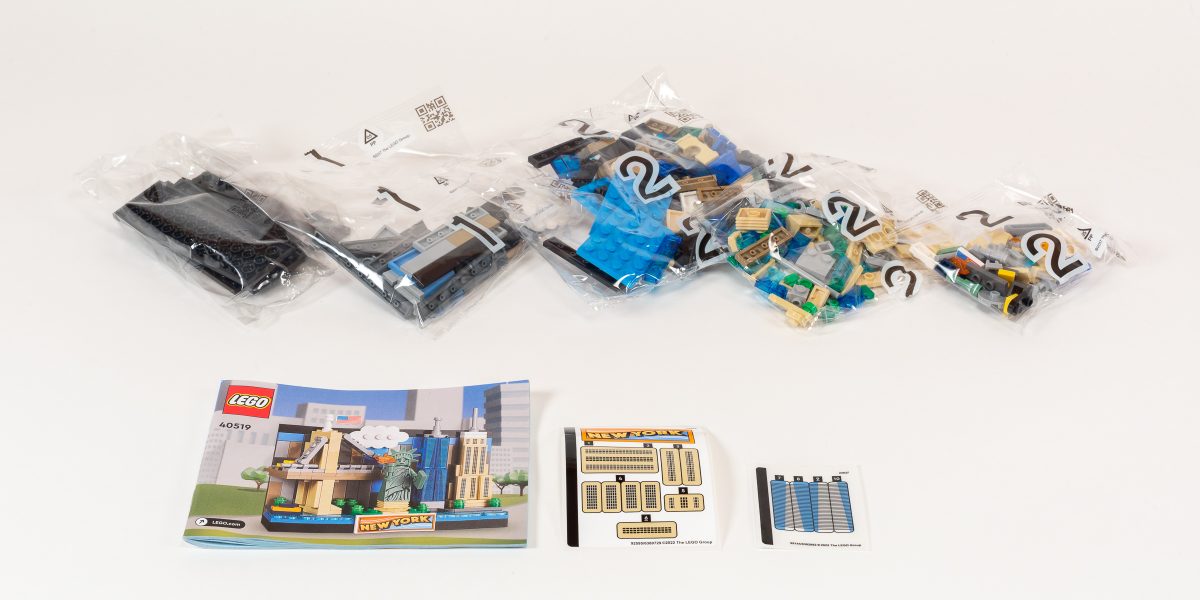 Bag 1 contains just the backdrop, but it does not include any recognizable elements apart from the cloud in the middle center, and a very abstract representation of buildings in the “urban jungle” around it using 138Sand YellowDark Tan, 194Medium Stone GreyLight Bluish Gray, and 199Dark Stone GreyDark Bluish Gray. 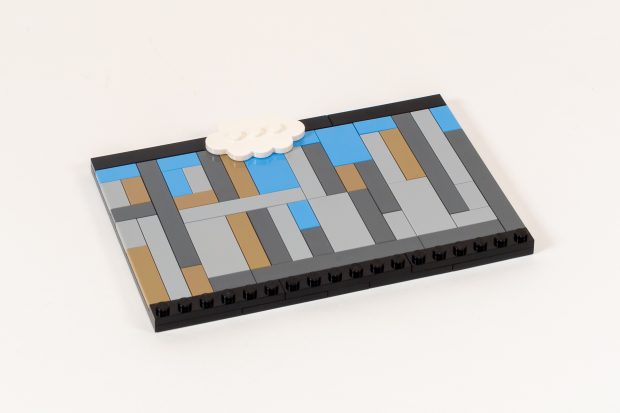 All that we build in the first stage is an abstract cityscape backdrop.

The bulk of the build is in the second bag with starts with a simple SNOT assembly for the base which is covered with tiles to create a smooth finish — very similar to the first bag of sets in the LEGO Architecture Skyline series. The buildings are recognizable to me, from right to left: Empire State building, One WTC (only recognizable due to the sticker), the Statue of Liberty set slightly in front, the Brooklyn Bridge with a taxi on the bridge, and a tiny representation of the Staten Island Ferry in the far left corner. (No attempt was made to create accurate scale – the taxi is the same size as the ferry boat.)

I do not like how wobbly the bridge is. It is only vaguely nudged into the right angle by the backdrop and wobbles a lot when you move or try to play with it. I also think the rendition of One WTC is problematic – it has a triangular shape on the front facades, but they are simply represented using the stickers.

That said, #40519 New York Postcard offers a fairly dynamic composition with some real layering compared to the Beijing set, so I think it’s a slightly better model. Not enough to earn a higher score though… As you will see they both earned a Good (3/5 Star) Rating. 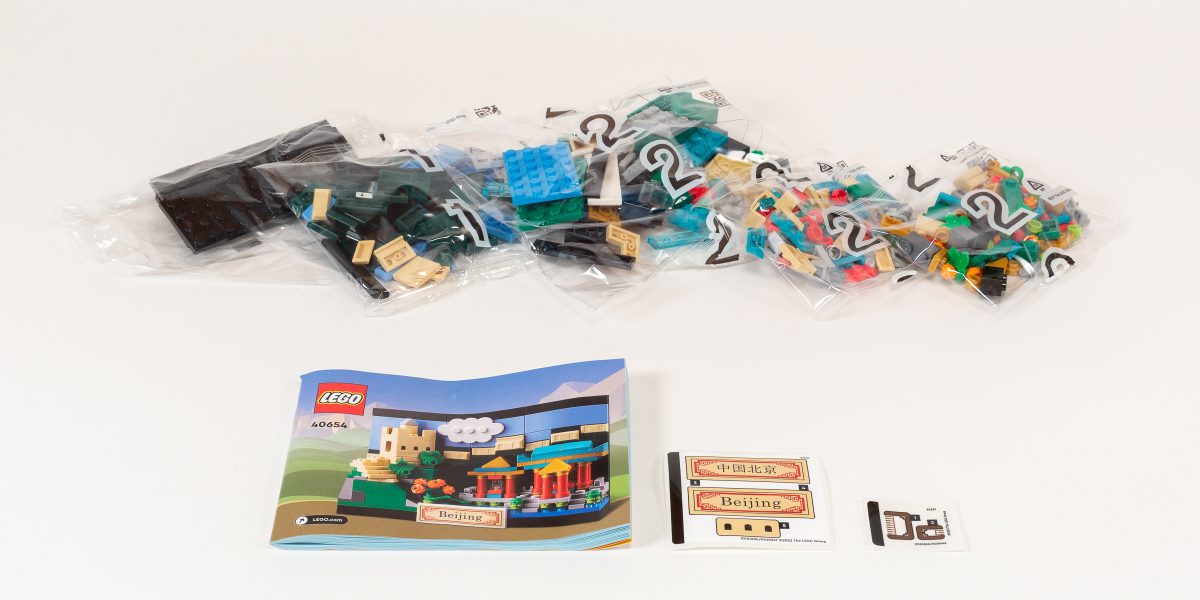 Again, the first bag is super straightforward, building the “backdrop” using basic plates and tiles. Unlike the New York model, we do get a very small amount of texture as some sections of the Great Wall are raised to stand out more. It’s not a terribly compelling effect, but it’s also hidden by the rest of the model that follows. 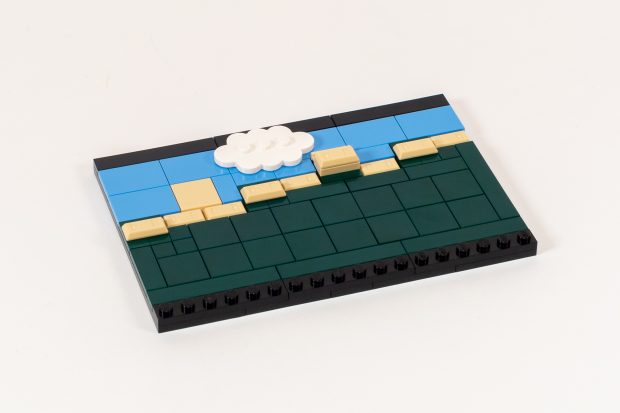 All that we build in Stage 1 is a decorated backdrop.

Bag 2 is the bulk of the build, where we build a solid base using more SNOT parts than I would have expected, and some greenery creating a hillside on the left side of the model. This is followed by the platforms to support the pagodas over what looks like water. The pagodas are brightly decorated in Red, Gold, and accents of Dark Turquoise (teal). The effect is pretty good, but not specific enough to be immediately recognizable.

This follows with The Great Wall itself, which is prominent in the finished model but only takes about a minute to build. It’s a pretty effective illusion despite the tiny number of parts which are used. The strong association in my mind between Beijing and The Great Wall helps this illusion work – even though the wall is not actually near the city.

This is a clever little build with some moderately advanced building techniques, including SNOT construction in the opposite direction than you might expect if you aren’t following the directions very closely. The finished model is cute, and very postcard-esque — even nearly matching the size of a postcard when viewed from the front.

As for the structures represented within said postcard, we have some extreme liberties at play. I think the reddish structure on the right is meant to be an excerpt from the forbidden city, but can not place it specifically due to the small amount of detail, and many years since I visited it. (The bright colors and appearance that it is built over water make me wonder if it is actually the Summer Palace instead, but I just can’t tell from the level of detail in the set.)

As for the Great Wall, it is a nice minimalist rendition, which is repeated in the backdrop as well. The tower is very similar to the ones in the LEGO Architecture series version of the Great Wall, but with reduced detail. The important note is that the Great Wall is not in Beijing, but rather about an hour outside of the city, making this a pretty loose interpretation of the city.

Ultimately this is exactly as advertised — a playful postcard-esque evocation of the highlights reel from a globally famous city. That’s why it earns our Good (3/5 Star) Rating, based on the assumption that the set will be fairly priced, or offered as a gift-with-purchase.

These are competent sets that offer a nice tease into architectural building for a much younger age group. I hope that we see additional postcards in the years to come. They are quick builds with interesting parts and bright colors – enjoyable if you accept them more as an homage to a city than expecting them to be realistic. In fact, it’s probably more faithful to the city than a typical souvenir snow globe!

I also haven’t yet discussed the fact that these sets were announced in late 2021, but delayed by at least six months. We do not have a clear answer why this happened, but the one change between the originally planned #40520 Beijing Postcard set and the updated version was the removal of the Chinese flag from on top of the Great Wall. It is likely caused by the exaggerated crop that was used for the sticker containing the Chinese flag. (Instead of re-designing the sticker they seem to have removed the flag completely.)

What do you think of these postcards — a nice homage to two famous cities, or a tacky re-interpretation of a tacky souvenir? Let me know by leaving a comment below!
The LEGO Group provided this set for the purposes of this review. The opinions in this article are strictly my own—providing sets for review does not guarantee a positive review. Photos in this article are by Tom Alphin unless otherwise noted. Visit the About page for more info about our journalistic standards and affiliate programs.