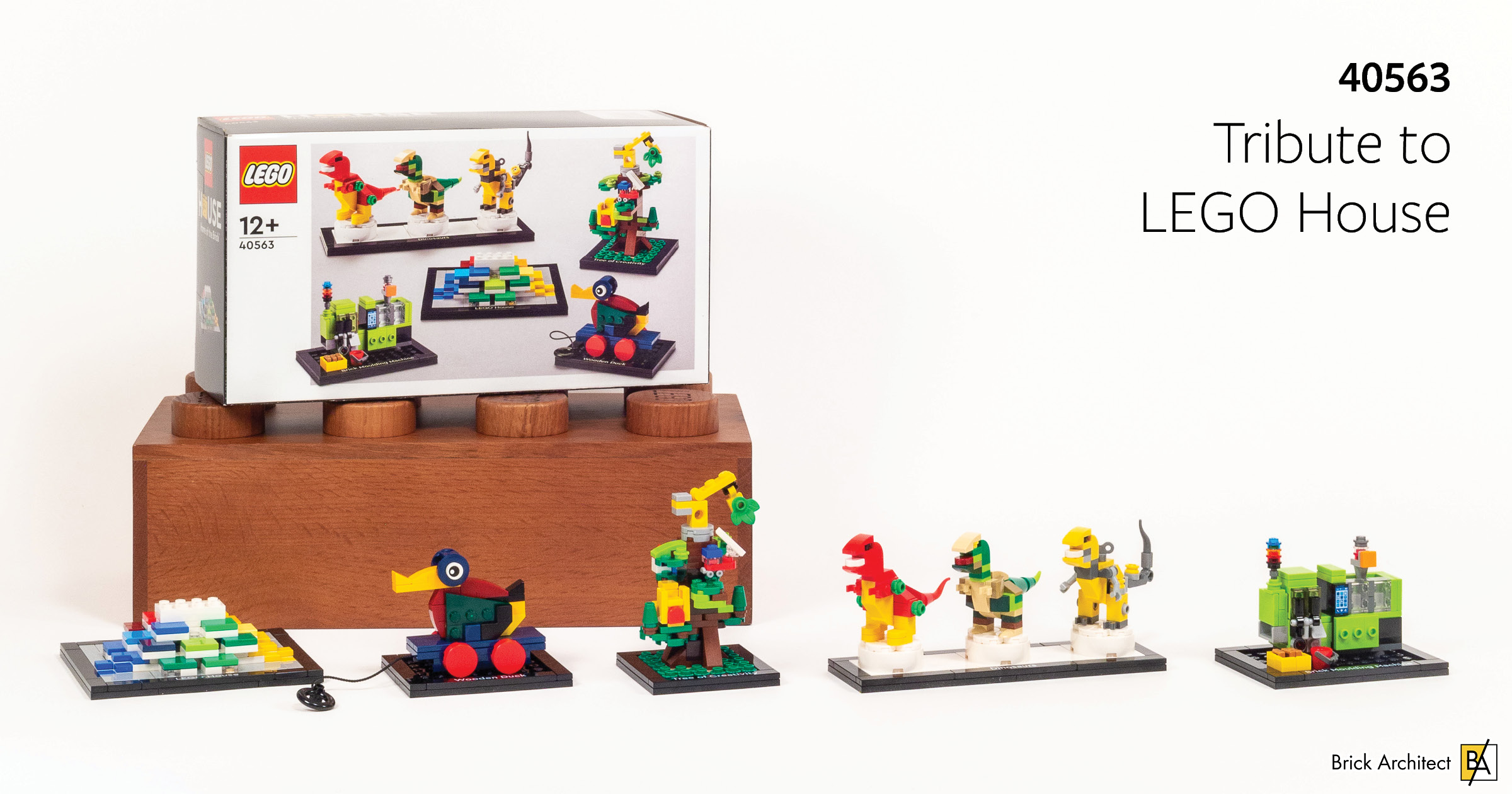 A decent-sized gift-with-purchase based on five rare LEGO sets that you can only buy at The LEGO House in Billund — but what’s the point when visiting Billund is out of reach for most LEGO fans?

#40563 Tribute to LEGO House is an upcoming gift-with-purchase set which will be released in a few days at the LEGO VIP Weekend. The set offers microscale vignettes based on five LEGO House exclusive sets — which means that most of the people receiving the set will not have any idea what these models are based on!

While the printed tiles for each model should give builders some idea, I hope that they include photos of the real objects that these are based on in the book. Otherwise, it is going to be really hard for casual fans to understand what these sets are meant to represent.

My best guess based on the title alone was an architectural model of the LEGO House that sits somewhere between the tiny brick badge size which employees at The LEGO House wear, and the larger version in the style of the LEGO Architecture series that you can buy at the gift shop. That said, it would be pretty small if it were half the size of the Architecture set — so I have no idea what to expect with this set based on the name alone. 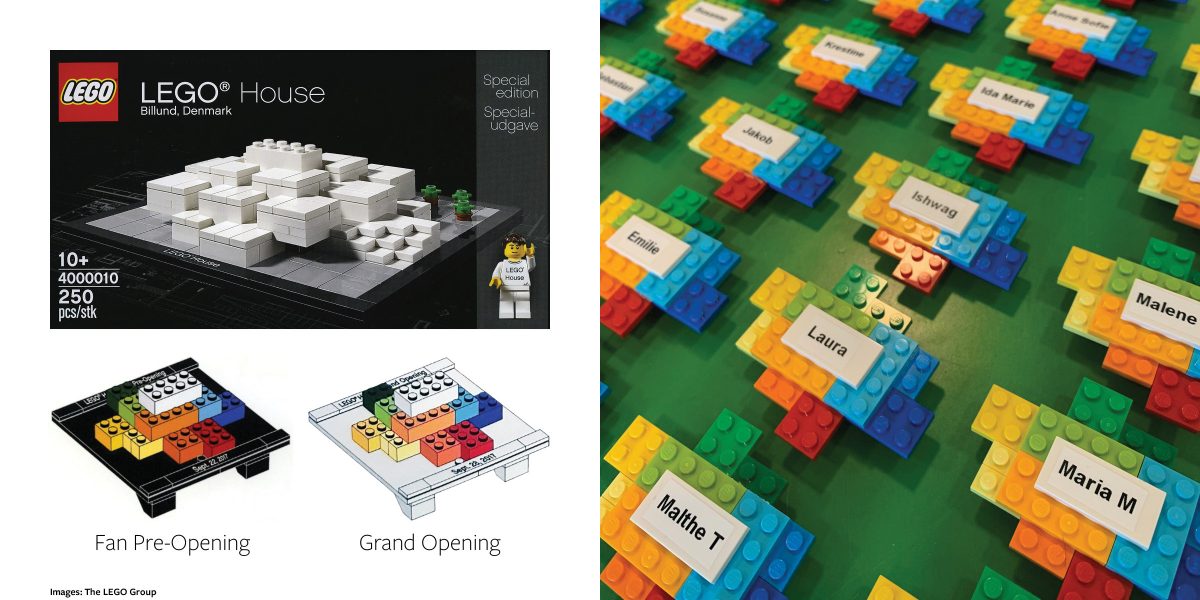 As you can see, the employee badge and LEGO House opening sets are quite small, so they need to come up with something larger to create a compelling gift with purchase set.

Previous small LEGO sets / models based on The LEGO House:

When I finally saw the box, I learned that they went with the “greatest hits” approach instead of focusing on just the building itself. Specifically, we have five tiny versions of previous LEGO Store exclusive sets. This approach of making tiny versions of existing LEGO sets was popularized by #40290 60 Years of the LEGO Brick, a previous gift-with-purchase set from January 2018 — which by contrast is based on some of the most iconic LEGO sets in history. 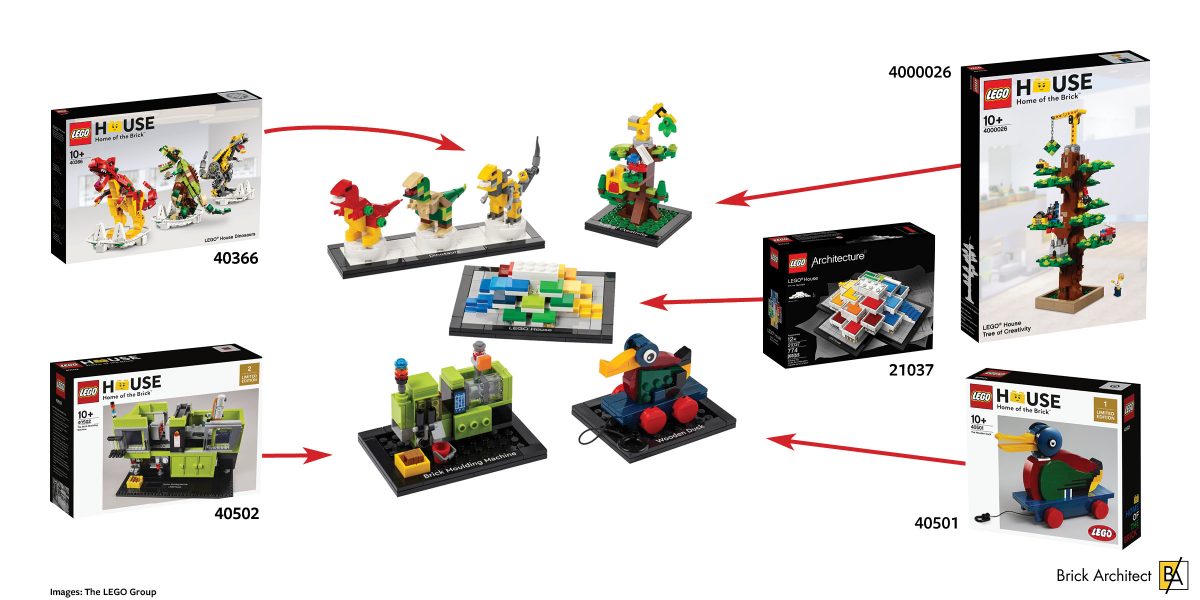 #40563 Tribute to LEGO House is based on these five LEGO House exclusive sets.

The result is a selection of tiny models of varying levels of recognizability, all based on sets which are out of reach for most LEGO fans because they are only available to purchase at The LEGO House in Billund. To make matters worse, several of the sets are no longer available!

LEGO House exclusive sets which this collection is based on:

The box is rather large for a gift-with-purchase set, which makes sense given the larger then ausual 250$ purchase requirement. It is a bit unusual that the box has no set name listed – instead simply showing the “LEGO House – Home of the Brick” wordmark on four sides, but not on the cover. 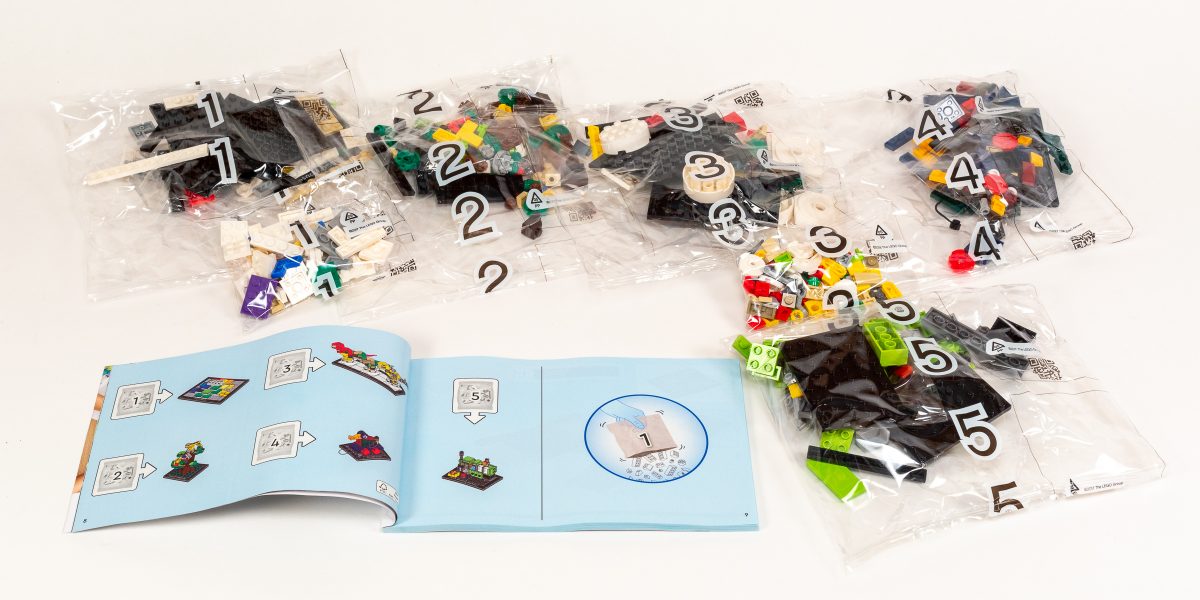 The notable metrics here are the weight-per-piece which at 0.52 g/piece is unusually low, indicating a set with lots of small pieces. We also see a very good price-per-part (based on the nominal price for this GWP), which is a lot less impressive when we consider the price-per-gram, which is pretty normal.

My set was marked with box code 4202. This code indicates where and when the set was manufactured – in this case it was packaged on 42nd week of 2022 in Billund, Denmark (Factory code ‘O’). As such, this set was packed around October 19, 2022 — less than a month before I received my copy!

The fact that the set appears to have been packed in Billund is interesting — The LEGO Group have very little packing equipment still in Billund, with most of their European packaging coming out of Kladno, Czech Republic. It is especially unusual to see a brand new set that was produced just weeks before it will be available to the general public. (We will have to wait for public availability to find out if sets for North America were produced in Mexico, or produced earlier so they could be shipped by boat.)

As noted earlier, the build process is broken into five numbered stages, matching the five models on the front of the box. Given that the whole set has less than 600 pieces, each of the smaller models ranges from around 75 to 150 pieces.

I am embarrassed to admit that I own a copy of #21037 LEGO House but haven’t had a chance to build it. I have seen the model several times though and am familiar with how it is built. That’s one of the reasons why I’m impressed with this smaller model — from the photos alone you can see lots of half-stud offsets in the design. Let’s see how that is achieved in the model. 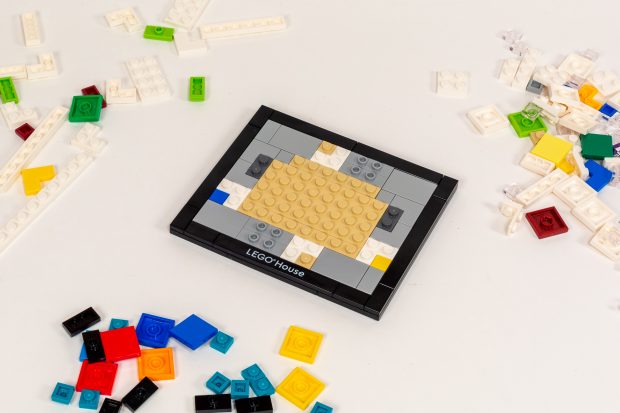 A simple base made of two layers of plate and tile.

The base is pretty straightforward, similar in style to sets in the LEGO Architecture series, albeit one plate thinner than those sets. (The sidewalk is flush with the nameplate in this model, but one plate taller in LEGO Architecture sets.) At the halfway mark, you can see how a grid of 107Bright Bluish GreenDark Turquoise / Teal 1×1 plates are carefully positioned to allow the half-stud offset between the second and third floor. 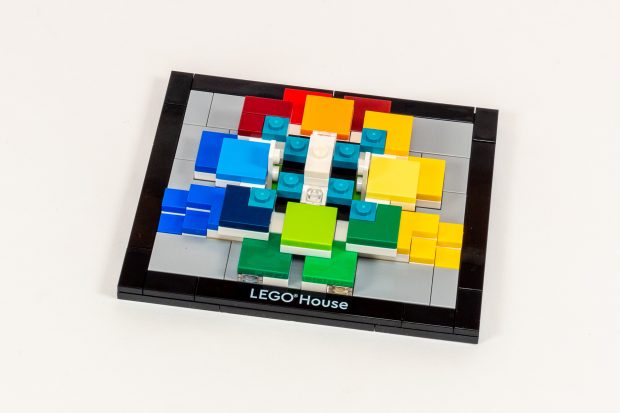 This is ultimately quite satisfying. In order to achieve the half-stud offsets throughout the model, we do not have the iconic large first-floor atrium, but we do have an excellent shaping of the model despite the small size. 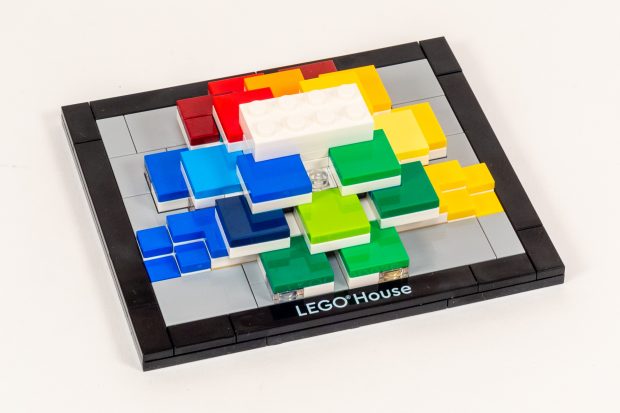 I really like the overall shape and color blocking, which feels faithful to both the larger LEGO Architecture set, and to the real building. This is a strong model for the small size, which would earn a rare 5/5 star rating in isolation. 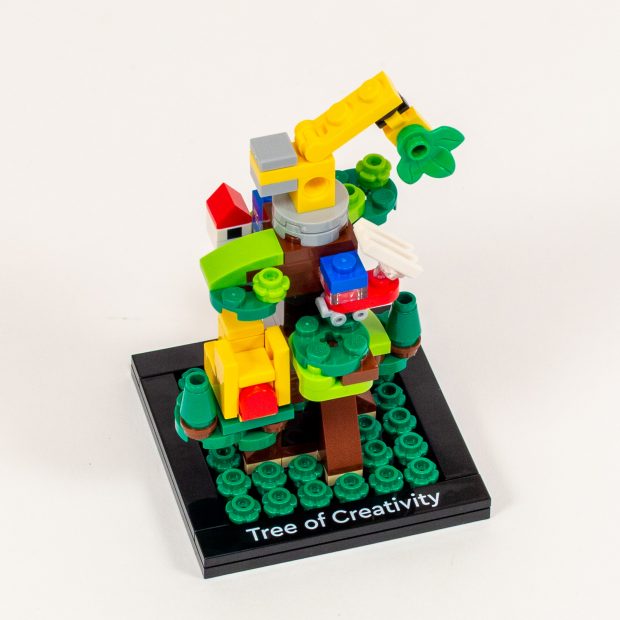 Finished model inspired by the Tree of Creativity.

I’m not all that impressed by the final model, but I have respect for the designers in managing to capture several recognizable microscale builds on the various branches, including a tiny fire truck, and the large yellow crane on the roof of the real building. It’s not a great model, but it would earn a 2/5 star (Acceptable) rating if it were a standalone polybag set.

This might be the most unique model in the set, since it features not just one, but three objects in a single composition. It is based on the three gigantic Dinosaur sculptures in the highest room of The LEGO House. The red one is sculped using DUPLO bricks, the green using LEGO bricks, and the gray and yellow one using Technic elements. 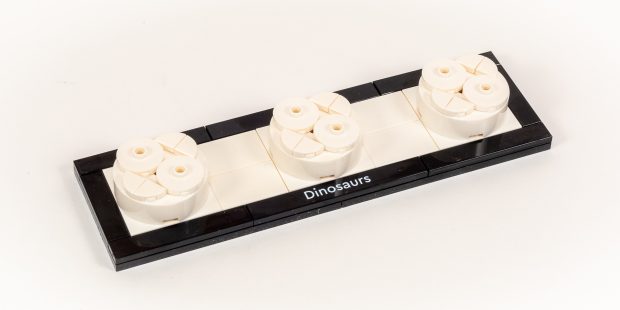 The base uses 4×4 turntables to position dinosaurs at an angle.

The base is straightforward, relying on the 4×4 Turntable elements to allow the angled composition of the dinosaurs attached on top. The three dinos are built in much the same way, with differences largely in superficial aspects such as claws/feet, tail design, and color blocking. It was easy enough to build that my 4-year-old son did most of the work – relying on me to stack 1×1 plates since he can’t quite do on his own yet. 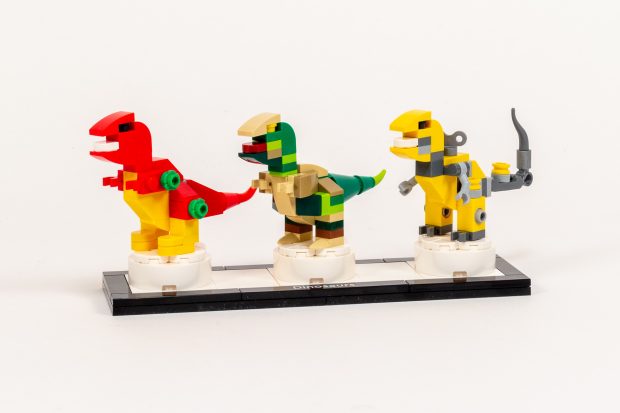 The fact that the real models are built using DULOP, LEGO, and Technic is almost completely lost at this scale, with no meaningful difference between the first two, and a few 24Bright YellowYellow ½ Bush elements and a wind-up part standing in for actual Technic construction in the third model. For this reason, this model barely works at this scale, earning a 2/5 star rating on its own.

The smallest model in the set is based on the only LEGO House Exclusive set that I’ve actually built. Brick Architect had the opportunity to review #40501 The Wooden Duck when it was first released in 2020. 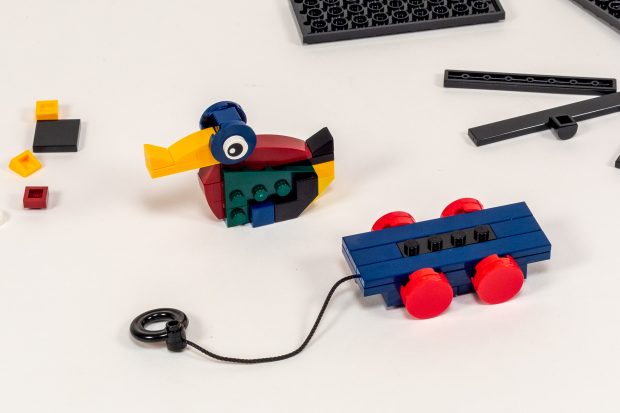 The Wooden Duck – Under Construction.

This version is truly tiny and only takes a few minutes to build. We have a simple platform using 2×2 plates and tiles for the wheels and a depth of just three studs. The duck body is just one brick thick, with wings on each side that are built using SNOT techniques. 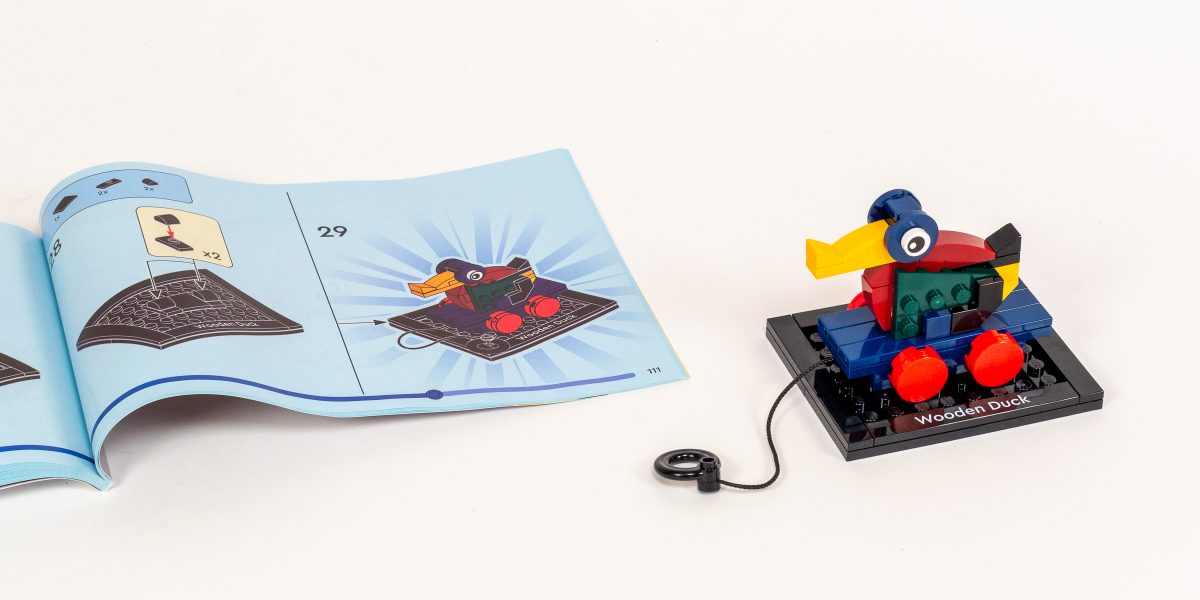 The completed Wooden Duck model is small but looks great.

Finally, we have a simple black platform with the printed tile on the front. It looks very good, faithfully re-creating the larger model at a small size. This is another very good model despite the small size. It would earn a 4/5 star (Very Good) rating if it were a standalone product.

The last model looks like a lime-green rectangular prism from a distance, but actually offers a decent caricature of how a LEGO moulding machine works. It is unfortunately a bit too small to be decipherable. It has two hoppers on the top, some red plates on the left, some clear sections on the right, and some important levers and buttons on the front. 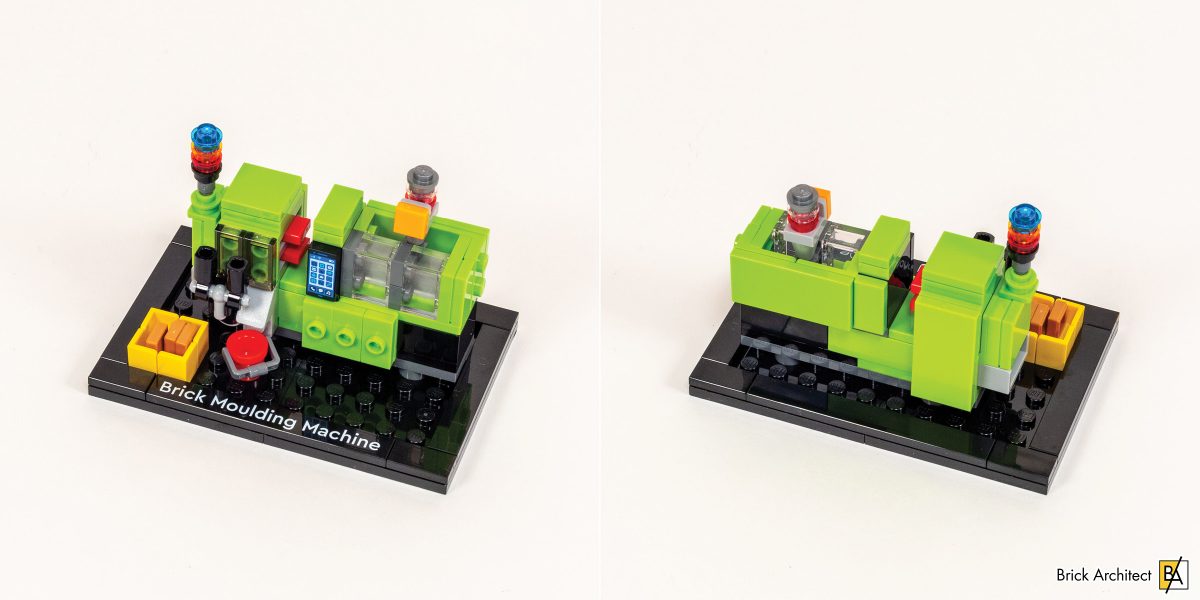 Moulding Machine – Front and Back.

It would be a nice microscale complement to the larger set, but has relatively little to offer to even a pretty serious LEGO fan that hasn’t been lucky enough to visit Billund. (I’ve visited The LEGO House, and it isn’t speaking to me much either…) That’s why it lands a 2/5 star (Acceptable) rating as a standalone model.

It is challenging to give a numeric rating to a collection of disparate objects, but I will try nonetheless. If you have read this far, you have seen that I really liked two of the smaller models in this set, and found three of them to be quite lacking. I also struggle to imagine how this set fits into most LEGO collections, especially for folks outside of Europe who may never have a chance to visit Billund.

That’s why I’ve decided to review it with a single person in mind; myself. For context, I have been to Billund once and I have built one of the larger models this set is based on. In my case, as a LEGO Architecture collector, I plan to display the small version of the LEGO House building alongside my larger LEGO Architecture models, I will probably keep the tiny duck with the larger one (which is not on display right now) and the rest will probably get parted out.

In terms of that overall numeric rating, a mix of highs and lows lands somewhere in the middle… That’s why I felt like this set overall deserves a middle rating — 3/5 Stars (Good). It’s a decent gift-with-purchase set, but it probably isn’t “worth” the $250 minimum purchase unless you were already planning to make an expensive purchase.

Going shopping next weekend? If you go big, you might have a chance to add #40563 Tribute to LEGO House to your collection!
The LEGO Group provided this set for the purposes of this review. The opinions in this article are strictly my own—providing sets for review does not guarantee a positive review. Photos in this article are by Tom Alphin unless otherwise noted. Visit the About page for more info about our journalistic standards and affiliate programs.