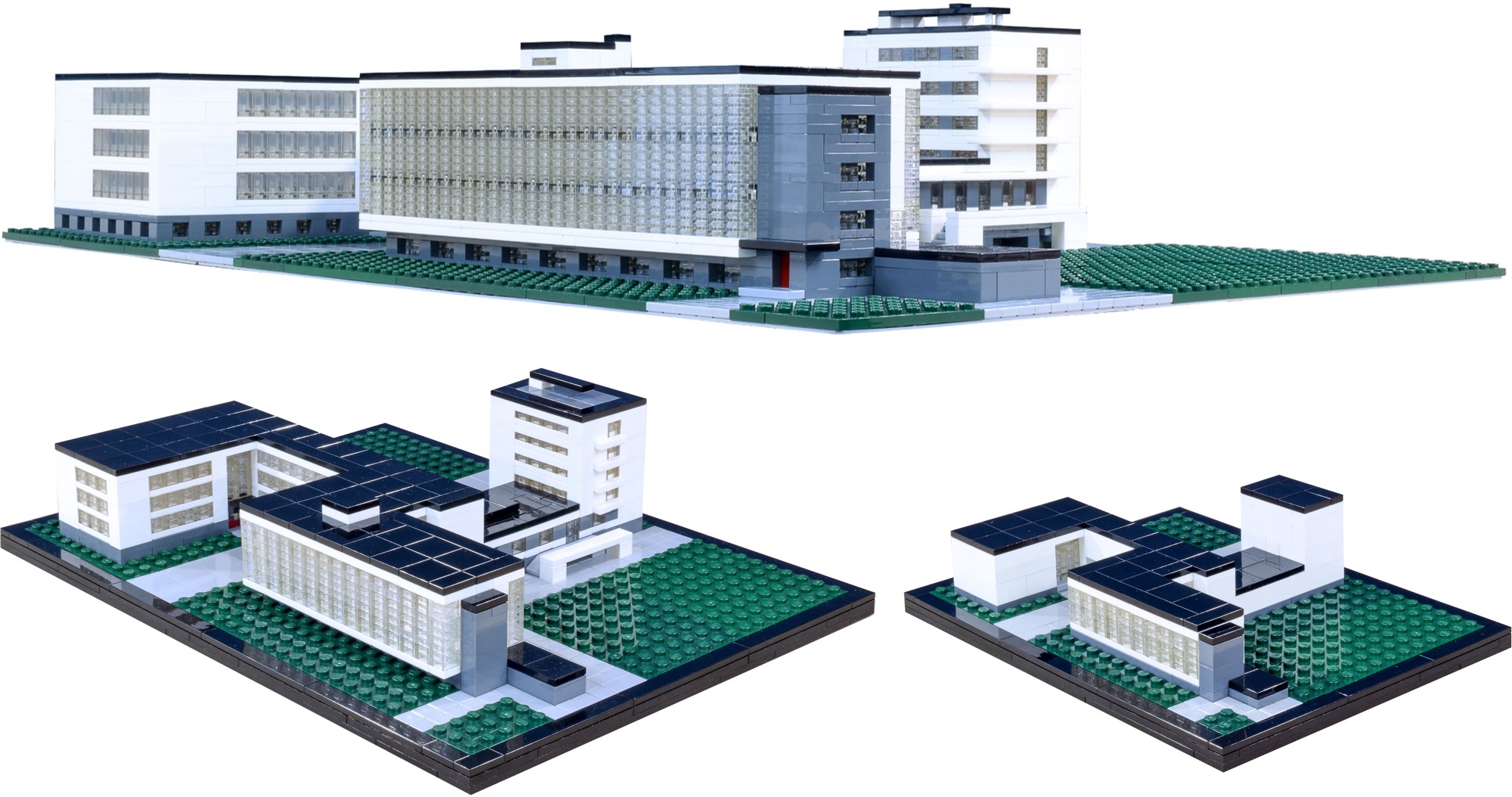 I am excited to share another great LEGO Architecture creation: The Bauhaus Dessau. The building was designed by the influential early Modernist architect Walter Gropius. LEGO Artist Gary Garvin didn’t just build one LEGO model of this famous building, he built 3 LEGO models at different scales! Learning about Gary’s project was a treat for me, as I researched this building and the works of Walter Gropius extensively while writing my upcoming book The LEGO Architect.

It is impossible to explain the history of Modernist architecture without beginning with Walter Gropius, the influential German architect who founded the Bauhaus school of arts in 1919. When the school needed to move to a new campus in Dessau, none other than Gropius himself designed the new Bauhaus Dessau campus, which opened in 1925. The school offered studies in Arts, Crafts and Architecture, and the building’s unconventional shape offered a discrete space for each field of study. This single building included student housing as well, which was in the tallest tower.

Aerial photo of the Bauhaus Dessau with the building’s basic shape highlighted in red. | Photo by M_H.DE under CC BY 3.0.

The Bauhaus Dessau is not the first building with iconic Modernist features, but it’s association with the Bauhaus school of architecture makes it one of the most famous early examples of the style. (Gropius pioneered his floor-to-ceiling windows in the Fagus Factory as early as 1911, with earlier architects like Louis Sullivan exploring the curtain wall approach in the 1890’s.)

The Bauhaus Dessau includes many of the 5 points of modern architecture which French architect Le Corbusier described at about the same period: It includes a prominent curtain wall window, horizontal bays of Windows, a relatively open floor plan, and a few Pilotis (small concrete columns) supporting upper floors. The fifth point, calling for flat rooftop gardens, is forgotten as in most Modernist architecture in favor of undecorated flat roofs. About the LEGO Models:

Gary Garvin didn’t just build one LEGO model of this iconic building, he built three! Each is at a progressively larger scale and is therefore able to include additional fine details. I’ve done my best to show the three models to scale, so you can clearly see how much more detail is possible in a larger model. I am impressed by all three versions that Gary created, but my favorite is the medium-sized one because it captures the essence of the Bauhaus complex using a small number of parts. It’s probably the size we would see if LEGO created an official model for this building in the LEGO Architecture series. This was intentional, as this version is given the same black tile border as most of the official LEGO Architecture sets. Details of the “Large” LEGO model.

Gary explained that “The Bauhaus has to have clean lines, so I turned all the 1×2 clear bricks on their side, placing the front part on flat plates, which hid the knobs. This got tricky in several places. Also I made supporting interior structures with clear bricks so they wouldn’t show through the windows.” You can see his attention to detail in these photos.

Modernism is one of the 7 architectural styles covered in my upcoming book, The LEGO Architect. The chapter discusses the history of the Bauhaus Dessau, the rise of influential Modernist architects such as Mies van der Rohe, and it includes LEGO re-creations of many Modernist designs including buildings by architects Oscar Niemeyer, Richard Neutra, and Skidmore, Owings & Merrill.

About the LEGO Artist: Gary Garvin

In addition to giving permission to feature his work at thebrickarchitect.com, Gary was willing to answer some questions about his work, and why he chooses to build LEGO Architecture.

Gary teaches English, is a writer, has worked in a museum and is very interested in art and architecture. He has read a number of books about Architecture, and I strongly support his recommendation to watch the “Architectures” series of short documentaries, each episode covering a different iconic buildings from around the world in detailed 30-minute programs. (One of the best episodes is the one which explores the Bauhaus Dessau!)

I asked Gary how he got excited about LEGO Architecture:
“I loved construction sets when I was a kid – Skyline was my favorite, no longer in production—but I didn’t become interested in Lego until a few years ago, when I discovered the architectural series. I was especially impressed with Michael Hepp’s Villa Savoye and Adam Reed Tucker’s Robie House. These are convincing and attractive models that encouraged me to branch out on my own.” Gary was drawn to building the Bauhaus Dessau with LEGO because it seemed like something he “could build with LEGO and [he] had a lot of white and clear bricks on hand.” He didn’t have any specific interest in the building before starting the project, but spent enough time researching the project that he “became fascinated with the building, … and became curious about the building and its art and artists and was motivated to read more.”

I love his attitude about the process of creating LEGO Models: “I think this is one real value of making models. You are actively engaged in its construction and get a chance to see all the people and ideas come together. It came alive.”

He provided the following detailed description of the build process for this model:
He began by building “a quick mock-up of the front wall of the main building, the workshops on the right, and was pleased with the result.”

After that, he found that finding “The floor plans was invaluable.” By building the foundation first, he got “a sense of how large the model would be and whether or not it would work out.” (You can find links to the floor plans at archdaily.com)

His approach is consistent with what other LEGO artists have explained when trying to determine the right scale for their models: If you build one difficult section of the model first, you can find blueprints or other precise drawings to calculate the scale required to complete the rest of the LEGO model. You may be able to find blueprints and other precise drawings online, or in architecture books.

The next step was to build “a quick, rough build of the whole project, using whatever bricks I had of whatever colors I had so I could figure out what to order and get a sense of minor issues. I also did a lot of experimenting, trying to find the best compromise for the finer details. Look at the gray column on the right—stairs Two bricks wide was too narrow, three wide looked too fat. But the three width allowed me to add a door in the center. I made similar experiments throughout. Finally, I made a careful build, adding minor adjustments.”

Gary felt like “The Bauhaus is not a complicated build, but proportions matter and with all the different parts everything had to come together.” He was happy that “The levels [of each floor] matched throughout.”

I want to close by thanking Gary for sharing his great LEGO Models with us, and for taking the time to share a little about his background and his build process. You can see many more photos, as well as interesting details about the history of the Bauhaus and Modernist architects by reading Gary’s article: The Bauhaus: S/M/L.