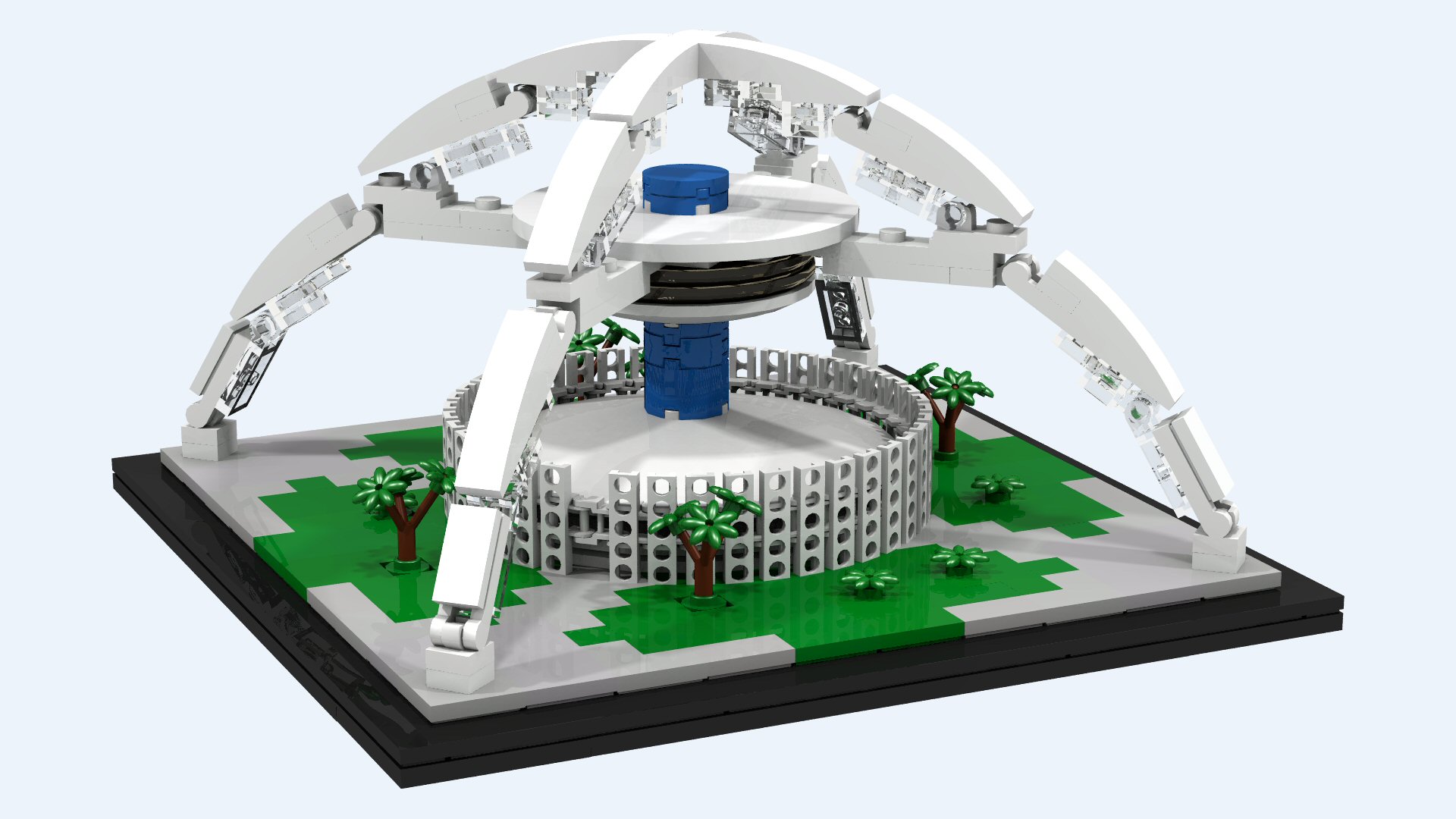 Lets learn more about this clever re-creation of a classic Futurist building, which was built using a small number of LEGO parts by LEGO artist Grant Passmore. I am excited to share one of the most unique new LEGO Architecture models proposed on the LEGO Ideas site, the iconic ‘Theme Building’ at LAX Airport (1961) in Los Angeles, California by Pereira & Luckman Architects, Paul Williams and Welton Becket. This model by Eiffleman (Grant Passmore) is designed in the style of the LEGO Architecture series, and employs some very creative parts usage to create both the iconic arches and the perforated lower exterior. It captures the essence of this unusual building perfectly. I’m really excited to share two new images that he provided me, including an early prototype of his LEGO model.

If you have ever visited LAX Airport, you probably noticed that it is comprised of several completely separate terminals (with separate security), and a very unusual building in the center. I had initially thought that it was an flying-saucer shaped air traffic control tower, but it’s true identity is as a restaurant and observation deck supported by two long intersecting concrete arches and a central column. The original ambition for LAX airport called for a massive glass domed area which would have serves as the central hub for the airport, but was scrapped as airlines started constructing separate terminals. The restaurant changed hands several times, and is now closed, but the observation deck is apparently still open to visitors.

About the LEGO Artist:

Grant Passmore (Eiffleman on the LEGO Ideas site) was kind enough to answer some questions about himself and about his LEGO Model. His professional background is in the Aerospace, having studied Mechanical and Electrical Engineering. His other hobbies include Remote-controlled cars and planes.

Grant’s first sets were in the late 60’s when he was young; he remembers having “lots of 45 degree slanted tiles, doors, windows, criss-cross fences, and gates”, and expanding on his collection until he was about 16 years old. After that, he “had a break for a decade (or three), but rediscovered [LEGO] and started buying sets again for my son.” He has built 8 of the sets in the Architecture series with his son, who also enjoys other themes like Star Wars.

Unlike many builders, he does most of his work using CAD software where he has unlimited LEGO “bricks” and is less limited by rare colors. That said, he will “build sections of a model … [to] ensure that a connection is strong enough.” He designs his models in the LDD application and creates the crisp 3D renderings using POV-Ray. (using LDD2POV application to take care of the conversion.)

Other LEGO models by Grant Passmore.

In addition to this model, he has customized the official LEGO Architecture Eiffel Tower, built a model of the Tokyo Tower, an intricate take on the Arc de Triomphe, and models in other themes. Grant is reluctant to admit that he is an AFOL, but I think he has shown a lot of creative potential and is deserving of the title.

About the LEGO Model:

When Grant was considering different buildings to create as a LEGO model, he was surprised that there hadn’t been any serious attempts at re-creating the LAX Theme Building using LEGO before, inspiring him to give it a try. He doesn’t have a special connection with the building, although he has flew in and out of LAX airport on holidays to the USA. He “sat outside and admired the Theme Building when [he] had a couple of hours waiting for check-in” but hasn’t been inside before.

He explained that “the screen wall and legs were very important features of the building, other features such as the restaurant saucer section and support column were set by the available pieces and it was these pieces which determined the scale of the model.”

The final chapter of my upcoming book, The LEGO Architect , has a section dedicated to picking the right scale for your LEGO Architecture model. Grant’s approach to finding the best LEGO elements to re-create the most important element of his model, and then using that to determine the scale for the rest of the building is one of several approaches that LEGO artists use when creating LEGO Architecture. I love seeing the creative process that other LEGO builders go through while refining their models. I was thrilled that Grant provided me an image from an earlier prototype of the building. He explained that the “prototype model picture was at the point where [he] had to shelve the project – The legs were too thick and the screenwall was just not working.” This is when he realized “why there was only one image on the internet” of someone trying to re-create this building with LEGO. Side view of finished model

Not to be dismayed, he “started to look at creating a curved arch by using hinged pieces, it can sometimes be very difficult to get hinged components to connect with studs, [but] in this case the geometry worked out quite well. It only took a few goes to get the pieces to connect. [Since] the arch structure varied in thickness [he] disguised this using dark grey pieces for the hinge parts and white for the arch” but switched to clear hinges which were less noticeable since LDD offered that option. Aerial view shows that the finished model would be 22×22 studs.

Thanks again to Grant for answering my questions and allowing me to feature his work at thebrickarchitect.com. Don’t forget to show your support for this amazing model at ideas.lego.com.