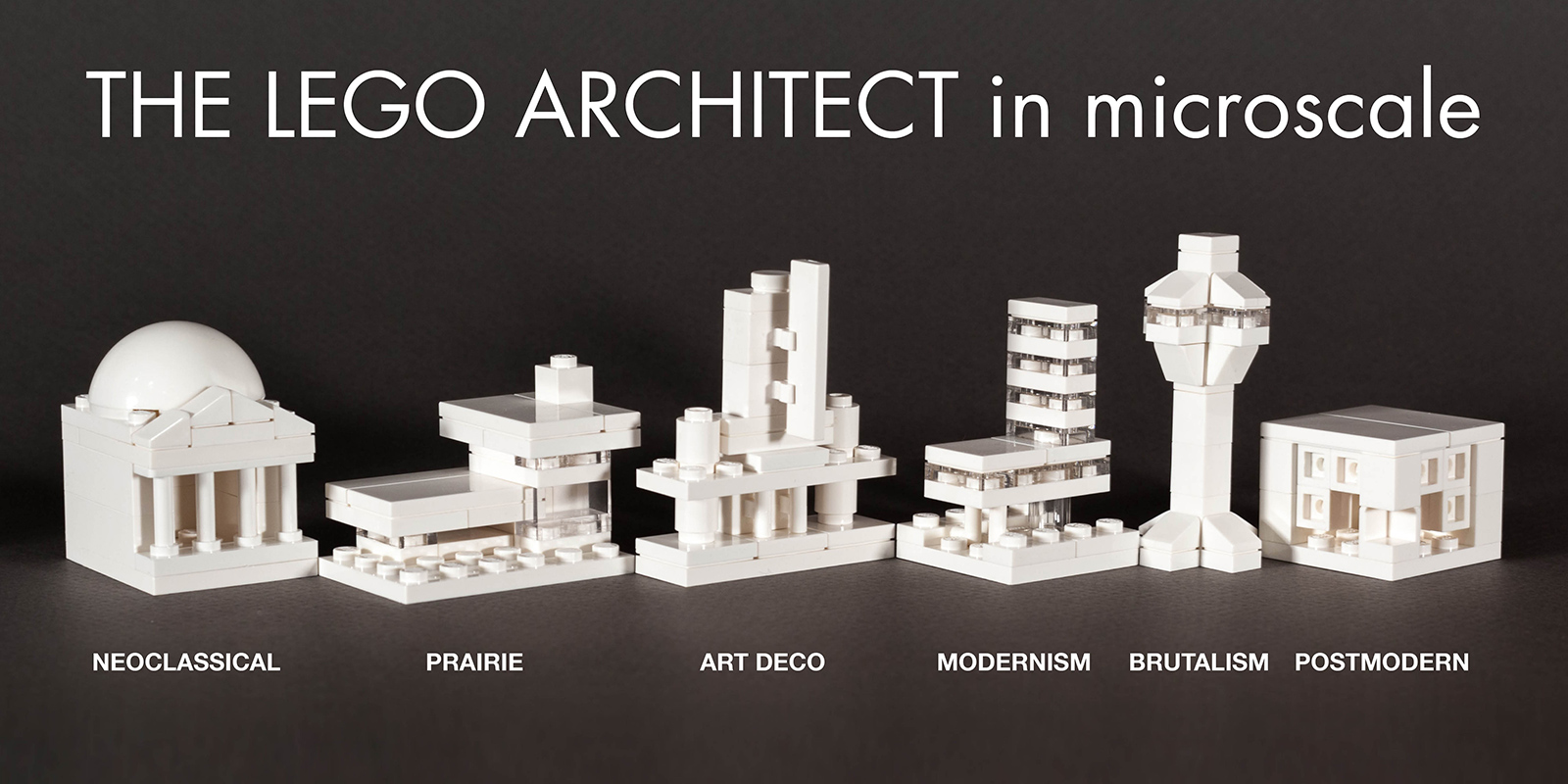 Nanoscale models of THE LEGO ARCHITECT

Can we tell the history of architecture using 20 LEGO bricks or fewer? Let’s find out!

Readers of THE LEGO ARCHITECT will recognize this collection of miniature LEGO Architecture models, which I created for the 2015 Alternate Advent Calendar contest at brickset.com. In compliance with the contest rules, each of these models is built using 20 or fewer LEGO parts (as compared to the larger versions featured in the book which use 200 LEGO parts or more.) Creative parts usage, and a high degree of abstraction is required to create convincing microscale models. Each of these models is representative of a prominent style of Architecture, covering more than 200 years of architectural history. (To learn more about these architectural styles, check out my book, THE LEGO ARCHITECT.)

NOTE: The common description of scale for LEGO projects is that a model built at a scale of about 1:36 to 1:50 is “Minifig Scale”, and anything smaller than this is “Microscale”. As such, even the models in my book are Microscale, so I shall use a different term to describe these aggressively tiny models: “Nanoscale”. The first is a nanoscale Neoclassical building. Neoclassical architecture was prominent from about 1750-1900, and is still commonly used for governmental buildings. I removed the building’s wings to fit the 20 part limit, but the iconic Neoclassical features such as the columns and domed roof are clearly visible in this tiny model. Next we have a nanoscale Prairie style home, based loosely on Willits House by architect Frank Lloyd Wright. The style peaked around 1910, although the influence of their open floor plans is clearly visible in Modern residential architecture. This model uses carefully chosen 1/2 brick offsets. I covered up the gaps in the front by using a 1×2 panel as the front window. Third, we see a nanoscale movie theatre in the Art Deco style. Art Deco is the architectural style of choice in the Roaring 20’s, celebrating wealth with decadent materials and elaborate facades. This model uses some uncommon parts for the front columns, and the marquee is carefully attached with 1×2 Clip Bricks. Modernism came next, and took the world by storm. It is often described by the famous quote “Less is more” by architect Mies van der Rohe. This nanoscale building is based on Lever House, a beautiful early Modernist office building in New York City. Clear plates create the tiny floors of the building, and a 1×1 clear round brick raise the second story of the building from street level. Brutalism is an offshoot of Modernism which celebrates the creative potential of Concrete. This nanoscale model is based on the many concrete Air Traffic Control towers which were built during the 1960’s and 70’s. 1×1 “Cheese” slopes give it’s conic angular appearance. We wrap up with a Postmodern office building, based on Ransila I, an office building in Switzerland by architect Mario Botta. In Postmodern architecture, we see a broader exploration of forms which revisit classical forms and eschew the sterility of Modernism. This nanoscale model uses the same technique as the larger version, using outward facing 1×1 plates to represent windows.

Have you tried to build “Nanoscale” models before? It’s a great challenge, but really neat to see how you can use unusual pieces in unconventional ways to capture the essence of a building with just a few LEGO pieces.

Notably missing from this collection is a nanoscale model based on “High Tech” architectural style also featured in The LEGO Architect such as the works of Santiago Calatrava or Frank Gehry. I did some brief explorations, but couldn’t find a way to create these abstract forms using so few LEGO elements.

I’d love to see your microscale LEGO Architecture projects, and hear what you think about these models, so be sure to leave a comment below…