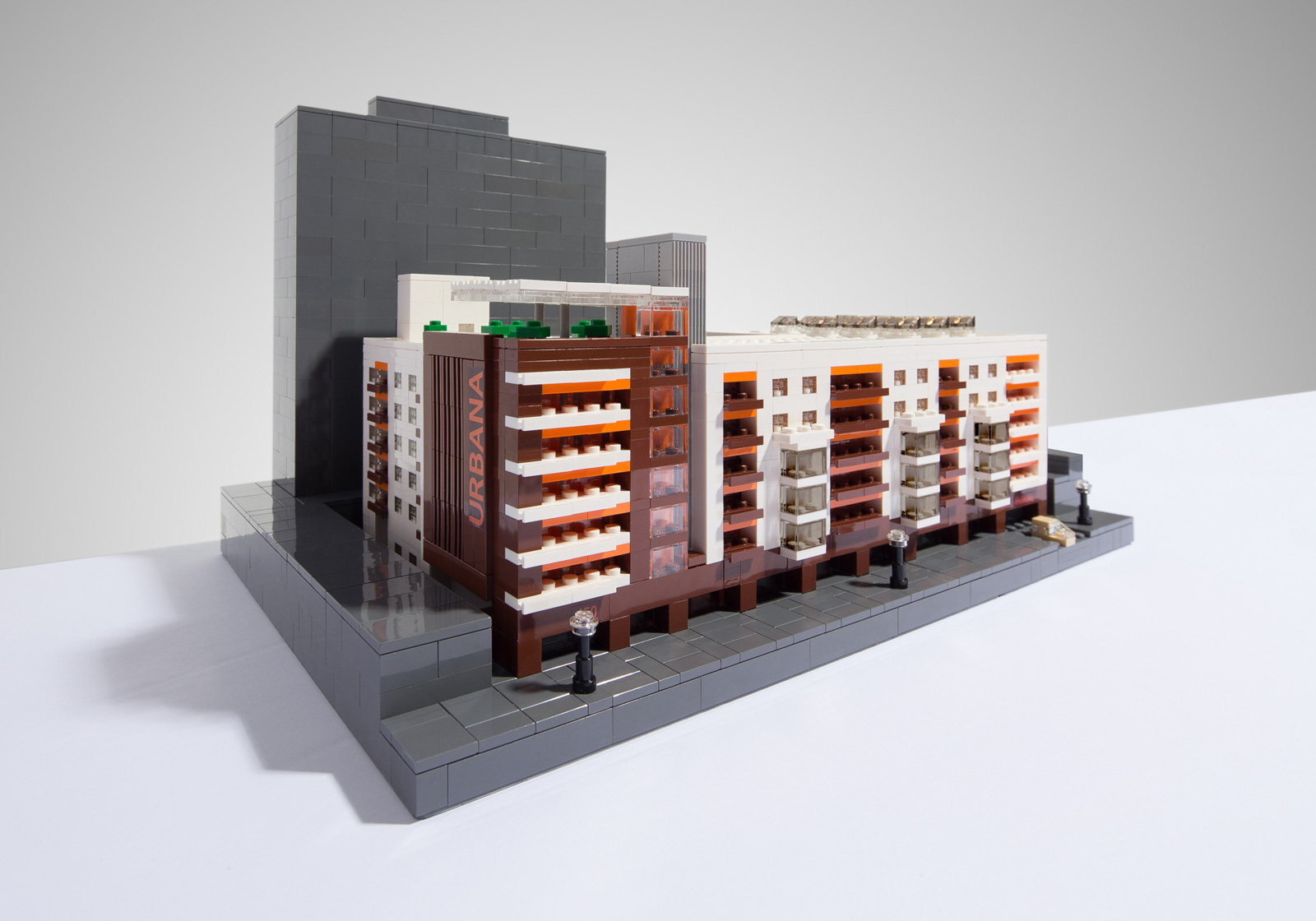 Let’s learn about this striking collaboration between a talented Architect and a talented LEGO Artist. Together, they beautifully re-created a contemporary mixed-use building using LEGO. I am really excited to share this great story about how Serafin Maranan of Architects Orange collaborated with LEGO Artist Christina Griffin Hull to build a beautiful LEGO model of his firm’s latest project. This is a unique glimpse onto the world of a practicing architectural firm. Serafin explains that “Urbana is a 6 story mixed-use infill project in downtown San Diego. It contains 96 rental units and over 1,100 square feet of retail. It has garnered many design awards and one of Architects Orange’s seminal projects.”

It contains a number of features common to many contemporary architecture projects, including a mix of horizontal and vertical planes, prominent features that project out from the building’s core, mixed materials, and splashes of bright accent colors. Relating it to the architectural styles explored in my book The LEGO Architect, the building is an example of “High-tech Modernism.” Serafin “thought this would be a perfect first foray into creating a custom LEGO model because of its importance to the firm, but also because the design lent itself to an interesting interpretation in LEGO. It took over six months to complete – from the first idea to its final form.” The model is packed with fine details which I love. Even the courtyard is a good match for the source materials.

It was really interesting to learn about how Serafin and Christina were able to collaborate on this project, ultimately creating a model that they were both proud of. The finished model took full advantage of both her experience building LEGO Models, and his experience with the source material and the visual language of Architecture.

Serafin: “Christina and I complemented each other. As an architect, I understand and appreciate scale, proportion, accent, color, detail and alignment to make the kit of parts fit my vision of the model. But Christina’s vast understanding of what LEGO parts to use and innate understanding of LEGO building techniques to execute my vision was paramount to the model’s success.”

Christina: “Serafin came into the shop with an idea. Once I said, “sure”, the floodgates opened. He came in with blueprints, photos, and drawings for me to work off of. He came in every few weeks to check in on the build. We texted photos back and forth. The most helpful was when he would mark up the photos of the model and send them back to me.”

Serafin: “She experimented with the façade and scale with me and on her own tirelessly. Once we had a clear strategy, she built out parts of the model with guidance from me, but at some point I let it go and she finished it herself. When the model was complete, I refined it as needed to get to where it is now. It was a true collaboration. “

I asked Christina and Serafin how the ensure that the LEGO model had the right level of detail. I’m always interested to see what tips and tricks people use to create amazing LEGO models. (There is a section at the end of The LEGO Architect which explores how some artists focus on the general form of the building, while others focus on fine details.)

Christina: “Since I know very little about architecture, I really needed to rely on Serafin to get the scale just right. All I knew was that I needed to create a model that could be easily displayed without being overwhelming and retain architectural detail that was important to the overall design of the Urbana.”

“We tried to come in with the model reflecting the overall “feeling” of the buildings design while showing “pops” of details that were precise.”

Serafin: “I didn’t want to add every detail. The challenge is how to convey the spirit of the building in clever ways, being imaginative about what LEGO element to use, or not to use. A small scale corners you into making these decisions throughout the building.” Urbana – Side View of LEGO Model

Serafin: “You may have noticed that the Urbana model shows dark grey buildings on all its sides. I always believed that context of where the building sits play a great part in determining how a design comes to fruition. It was important to me to include adjacent buildings in the model as it represents real context.” I asked Serafin which part of the model was most detailed. He explained that:

“The best detail is in the recessed façade, the articulation of the planes, the balconies, the elevator shaft using grilles to convey texture, the use of the orange color as accents, and the use of slopes to represent the solar panels.”

Christina: “There are some details that LEGO elements can’t replicate, and it is best to focus on details that can be replicated to take the focus off what can’t be shown. … The very first thing that I saw that I knew exactly how to build were the banks of windows that come out from the front of the building. I built everything around that detail. However, I think my favorite detail is the shaded rooftop area.”

Serafin: “Determining the right scale was the most challenging part. I brainstormed this internally with Architects Orange designers and with Christina. At first, I wanted it to be a smaller model but it proved difficult to capture the essence of the building at a smaller scale, so we decided to do it at its current scale. The next challenge was to determine which details needed to be accentuated or played down, and the appropriate colors and brick elements to use. This is where Christina was huge and pivotal to the success of the current model.” Christina: “We have several LEGO Architecture builds in the shop as well as several pieces of LEGO Architecture photography so we were able to discuss the scale of those models in relation to what we were working on.”

Serafin: “The model was built well after the actual building was constructed. Presenting the model in LEGO during the design phase would be a unique and interesting way to do it. … A lot of people in our industry may consider LEGO as a throwback or old school to convey ideas to the client, perhaps even as a gimmick, because it is a “child’s toy”. But I believe after a first chuckle or two, LEGO can be accepted on a serious level. It is very quick, nimble and flexible. It’s greatest strength is in its real physical 3D form (not digital) that you can appreciate in your hands; a very sculptural tool indeed.”

“I would like to use LEGO in our office as a design or presentation tool if the right opportunity arises but I’m not sure if we have anyone in our office who can do that or have access to so many parts.”

Christina: “Honestly, I would have never thought to tackle an architectural type project without Serafin. … Not only does he have architectural knowledge but he has specific knowledge and experience of Urbana itself. He knew what was important to the designers and the builders.”

Christina: “Collaborating with an architect kept me on my game. It was a little stressful and quite humbling because I know nothing about architecture. Serafin is a perfectionist and extremely passionate about architecture. It was a great pairing because he could start to describe an idea and I knew instantly if there were LEGO elements that could fit the bill, so to say. He completely respected my knowledge of LEGO elements and their limitations and I completely respected his knowledge of design.”

Serafin Maranan
Serafin is a Principal architect at Architects Orange where he has worked “for over 12 years, within the Residential Studio focusing on low and high density mixed use and multifamily projects, with Principal in Charge/project management responsibilities on the design and entitlement of projects.”

Serafin is excited about LEGO, but new to the hobby: “I only picked up LEGO building three years ago… I grew up in the Philippines where LEGO was … a luxury imported toy. I received a Bachelor of Architecture degree at Cal Poly Pomona in California in 1991 and since then have been immersed in the architectural industry. I picked up LEGO three years ago when the Architecture series came out. My all time favorites are Villa Savoye and Fallingwater models.  That ignited a strong interest in me and a spiritual kinship with LEGO.”

Serafin’s next LEGO project is “to build the Schroeder House by Rietveld after the holidays. It’s my all-time favorite house design, and of course the planes and colors translate well to LEGO building.”

Christina Griffin Hull
Christina’s passion for LEGO started as a child. “My brother received a Castle themed set for his birthday one year, and I was hooked since then.” It grew into a business when she and her ex-husband realized that you could make money selling LEGO parts and sets online. “He started selling some of his own, and our son’s used LEGO parts online in his spare time. Our business now houses over 1.2 million LEGO elements in addition to thousands of sets at any given time.” In addition to her business selling LEGO bricks and sets, she takes commissions to build LEGO models, including this LEGO model of Urbana.

Learn more about Christina by visiting her store at constructibles.net.

Architects Orange
Architects Orange is an architectural firm in Orange County, CA which focuses on sensible architecture, with a focus on Retail, Mixed use, and Residential projects. The firm works in diverse styles, such as ‘Urbana’ which has a progressive modern feel with projecting volumes, mixed materials and bright colors, while ‘Main and Abel Apartments’ show a blend of a postmodern interpretation of Mission architecture and current trends. Founded in 1974 by Jack Selman, the firm has grown to a team of more than 200 professionals.

See their portfolio of Architectural projects at http://www.architectsorange.com/