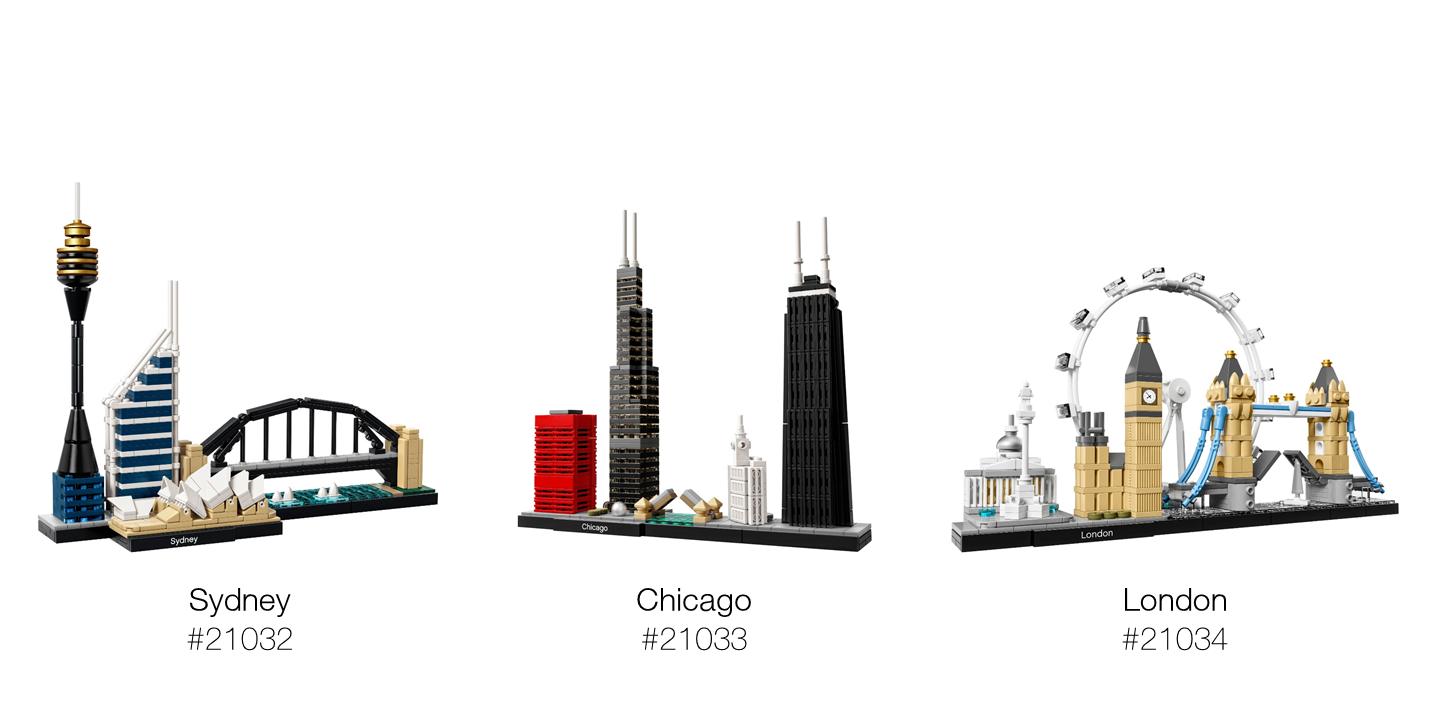 Unlike the 2016 Skylines sets which ranged from 212 to 598 bricks, all three of the new models have a similar part count of around 400 bricks, and will likely have a similar retail price of around 39.99$. With three new additions to the Skylines series for a total of six models, it is fair to assume that The LEGO Group has been satisfied with the success of this new sub-theme. (With around 100 cities in the world with a population comparable or larger than my home of Seattle, this is a theme that they could easily continue for 20+ years if they want.) Having never visited Sydney, it’s difficult for me to say how well it captures the spirit of the city. While a bit crude, the rendition of the Sydney Opera House is immediately recognizable, which is an impressive feat given the tiny scale.

Chicago is an amazing city for Architecture, and it’s a pleasure to see it re-created in the Skylines series. While there are a wealth of buildings to choose from, it’s not surprising that they revisited the first two models in the LEGO Architecture series: #21000 – Willis Tower, and #21001 – John Hancock Center. I am a little surprised by the decision to include the CNA Center, as it isn’t a building that I sought out in either of my two architectural tours of Chicago. That said, I’m especially pleased to see a better take on the John Hancock Center than in #21001 – John Hancock Center. The new version better captures the sloping walls of this iconic skyscraper.

We have a little more information about this model, as it is already available for sale at the newly opened LEGO Store in the heart of London at Leicester Square. This is the largest of the three new models, and in my mind the most appealing. By placing the London Eye behind Big Ben and the Tower Bridge, we have a nice layered effect and a pleasing composition.

While this second wave of Skyline models is more consistent that the previous wave in terms of part count, we are also seeing greater variation in the footprint. All three models in the first wave had a base width of 32 studs, while it looks like Chicago has a base of just 28 studs, and London has a width of 36 studs. Sydney matches the 32-stud width of the 2016 sets, but it has a 4-stud deep protrusion in the front to accommodate the Sydney Opera House. Chicago and London also have sections that stick out on the back. (The only protrusion in the 2016 sets was an extra row in back of the #21028 – New York City model to accommodate the Statue of Liberty.) Another general observation is that all three models in the second wave contain a prominent bridge and water feature. I do not know if this was deliberate, or if it is simply a coincidence since many architecturally important global cities are on the water, and bridges are central to those cities identities.

I am definitely happy to see a continued development of the LEGO Architecture theme. I think that this second wave of Skylines sets is a little better than the first wave, in part due to a better layering of the buildings and bridges to create a sense of depth. (The 2016 models felt too flat and static.)

I am also a little sad to see so much energy being put into the Skylines sub-theme, and so little investment in the “Landmarks” and “Architect” sub-themes. Rumors and leaked photos indicate that #21035 will be a slightly larger, slightly improved re-design of #21004 – Solomon Guggenheim Museum. (When it was rumoured that a LEGO Architecture model of the Guggenheim was initially leaked, I had hoped that it would be of the Guggenheim Bilbao, or the Guggenheim Abu Dhabi that opens this year, instead of a re-release.)

Thankfully, there are rumors that we will see one additional set in 2017. I really hope that it is a large, architecturally significant model in the spirit of classic sets from the series like #21005 – Fallingwater, #21010 – Robie House, #21014 – Villa Savoye, #21017 – Imperial Hotel, #21018 – United Nations Headquarters, or #21030 – United States Capitol Building. The series would really benefit from another premium set for advanced builders. (To be fair, the LEGO Group also releases large architectural models under the Creator Expert branding, but those models are much larger and include more intricate sculptural detailing, rather than focusing on architectural forms and massing. It really is a different aesthetic.)

The 2017 sets take the Skyline collection in new directions by allowing more complex compositions using more depth, as well as the inclusion of bridges and other types of features.
Is this a good change? Let me know what you think by leaving a comment below!