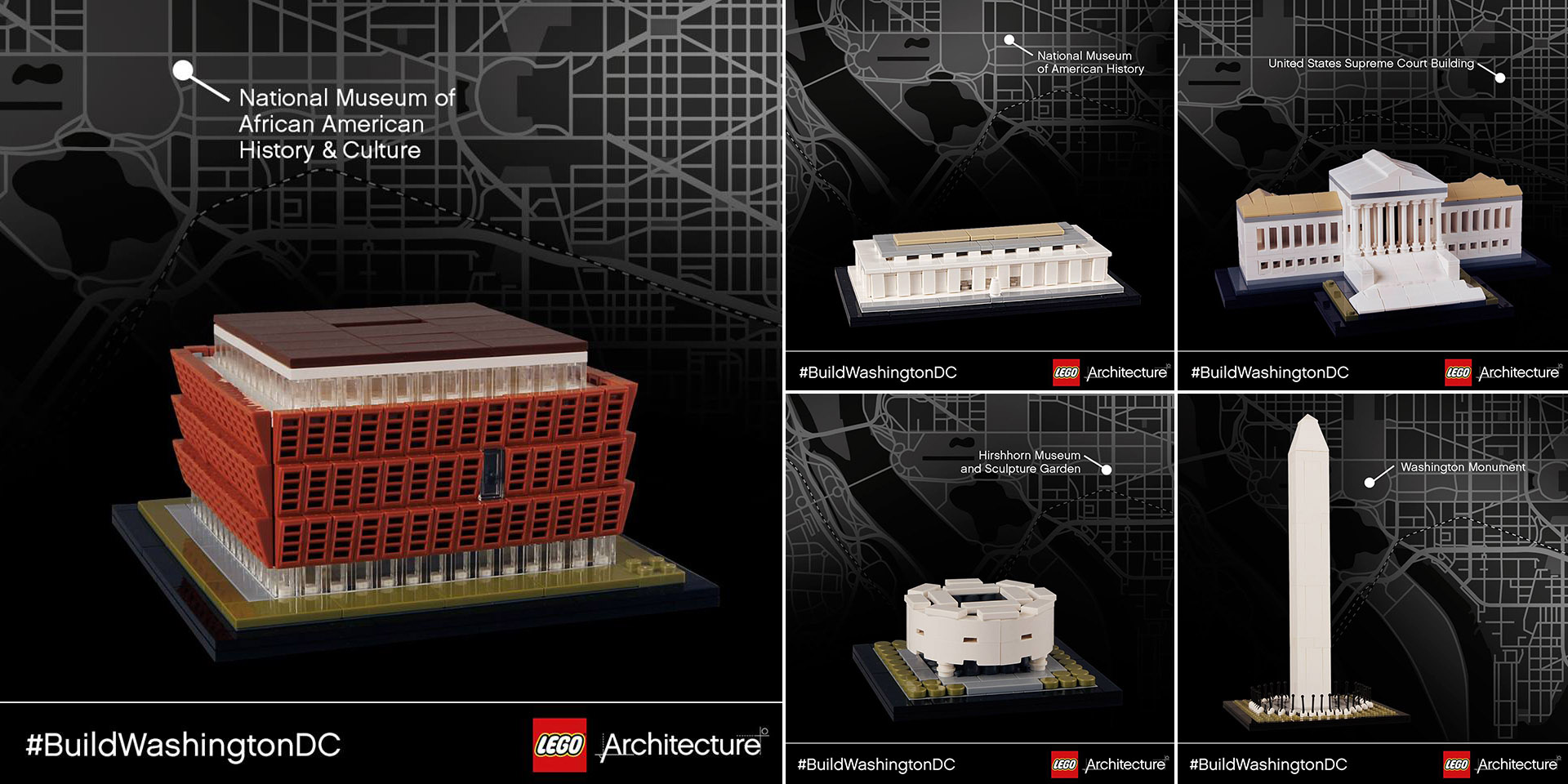 Check out five brand-new LEGO Architecture models of Washington DC designed by The LEGO Group to celebrate the release of 21030 – US Capitol Building.

Following the release of #21030: United States Capitol Building in September, and in anticipation of the 2016 US Election, The LEGO Group ran an inspiring LEGO Architecture promotion exploring Washington DC Landmarks. The following 5 brand-new LEGO models featured in this article were posted to their Facebook page: https://www.facebook.com/LEGOArchitecture/ (They post great content, so I strongly suggest “Liking” their page.)

The first new model explores the iconic tower that sits at the crossroads of Washington DC, between the US Capitol to the East, and the Lincoln Memorial to the West. The LEGO model is about 30-studs tall and 4 studs wide. The real building is gently tapered, making it almost half as wide at the top than the base (34′ at top, 55′ at base). It is understandable why this detail wasn’t included, as it impossible to re-create using LEGO in an elegant manner at this scale. Nonetheless, let’s call this a “warm up”, as it is the weakest model in the series.

The second model looks at the Unites States Supreme Court, home of the Judicial branch of the US Government. (The Executive Branch is led by the President in the White House, and the Legislative Branch is comprised of the Senate and House of Representatives which meet in the US Capitol Building.) The model faithfully captures the symmetric front facade of the building, although the real building is much deeper. The narrow windows along the left and right flank of the building are approximated using 1x2x3 Panel #87554. The Tan roof looks a bit weird, but it is a fairly accurate color choice.

As someone who grew up near Washington DC, I have a lot of enthusiasm for the Smithsonian Museums. American History is a very imposing building from street level, as it is an imposing building. In a modernist nod to the many columned buildings in Washington DC, the building features alternating bold vertical projections and Recesses – re-creating the rhythmic stripes of a columned facade with blocky forms. The buildings blocky facade is expertly captured using an economy of LEGO elements in the finished model. This model is a real treat as it captures an early example of a modernist building which was designed to fit alongside historical architecture. The Smithsonian Institute has a longer analysis of the buildings architecture at http://americanhistory.si.edu

The Hirshhorn Museum and Sculpture Garden

The Hirschorn Museum is a large round building on stilts, referred by some people as looking like a “spaceship”. Round buildings like this and the Guggenheim (technically a spiral) make interesting art museums as curators have long continuous walls to work with. This model is very simple, but effective. The building’s roof struggles a bit, although I think they could do a more convincing job with the roof since the 4×4 ‘macaroni’ tile was recently announced as part of the 2017 ‘Assembly Square’ LEGO Creator set.

This landmark museum opened this year on September 26th, finally dedicating a prominent place on the National Mall to share the stories of generations of African Americans. The building features an unconventional design by global architectural superstar David Adjaye. It is clad in a partially transparent mesh of bronze-coated aluminum panels. This gives the building a very dramatic presence in a city dominated by Classically, rooted stone buildings. Adjaye’s exterior is comprised of three layered “crowns” which were inspired by West African arts. Being a brand-new building by a living architect, there is a wealth of information about the building online including this article at https://nmaahc.si.edu/.

All three are excellent models, although my favorite of the three is The White House as it packs a lot of details into a reasonably small model. The US Capitol Building is a close second, as it has a great monumental scale once completed, although the construction is a bit more repetitive than some other models.