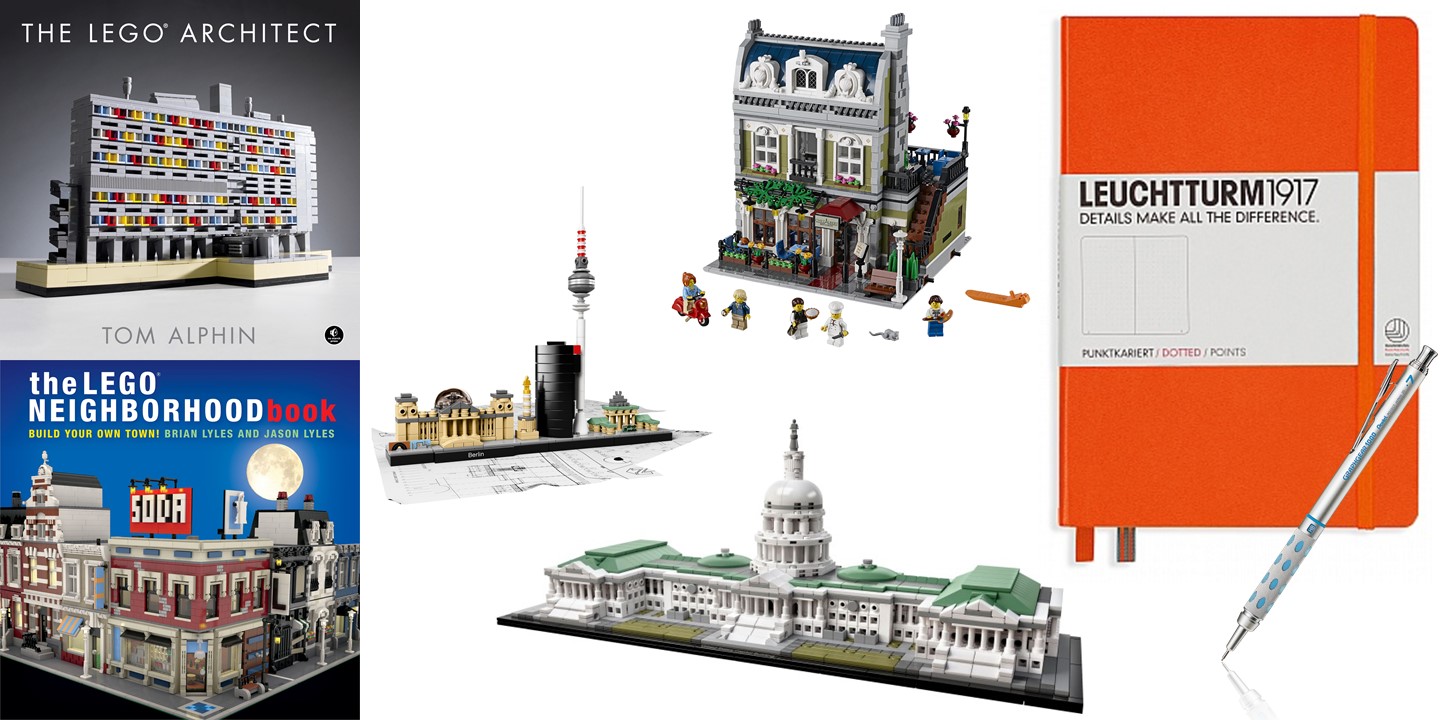 Shopping for the perfect gift can be a chore – that’s why I prepared this Holiday Gift Guide for the LEGO lover or Architecture enthusiasts on your shopping list.

There used to be a lot of LEGO Architecture sets under 50$, but many of them have recently retired. Of those that remain, the best value is certainly this clever model of Berlin. With just a small number of bricks, the model effectively captures the essence of the Reichstag after the iconic remodel in 1999 by Norman Foster. Also included are the Victory Column, Deutsche Bahn Tower, Berlin TV Tower and the Brandenburg Gate.

Honorable Mention: Apart from the poor value at 29.99$ for just 212 bricks, #21026: Venice is a great little model. It captures the spirit of the city very well, and is immediately recognizable on your desk or bookshelf.

If you want a striking architectural model at a reasonable price, you can’t go wrong with the newly released model of the US Capitol Building. The building’s iconic shape and two visible branches of congress are very well captured in the finished model. It’s also a great source for White 1×1 Headlight bricks, as there are 178 of them in the box!

Honorable Mention: You also can’t go wrong with #21024: Louvre, which is a great set with interesting building techniques. It explores varied architectural styles: the palace in an Second Empire / Neoclassical style, and the Postmodern pyramid by I.M. Pei. It contains 695 LEGO bricks for a 59.99$ MSRP.

This model is consistently called out as one of the best models in the Modular Buildings series, a collection of Minifigure-scale models which snap together to create an urban streetscape. The larger minifigure scale compared to sets in the “architecture” series allows a ton of intricate architectural details, including some really clever parts usage. (look for the croissants!)

Honorable Mention: The newly released #10253: Big Ben Creator Expert model has incredibly intricate architectural detailing, interactive features, and is a good value with 4163 LEGO bricks for a 249.99$ MSRP. It’s a good choice for builders who prefer realism to Minifigures.

While I am incredibly proud of my book, The LEGO Architect, there are a few other LEGO books that I can recommend for LEGO Architecture enthusiasts. My book explores 7 architectural styles through a combination of photos of real buildings, inspirational LEGO creations, and instructions to build models in each style using common LEGO elements.

Pairs well with: Did you know that my book, The LEGO Architect was inspired by the release of #21050: LEGO Architecture Studio set which was released in 2013. It’s a great way to get a lot of white and clear bricks to build many of the models in my book, and your own creations. (159.99$ MSRP, 1210 LEGO bricks.) After you’ve exhausted my book, I suggest you check out The LEGO Neighborhoods book if you enjoy building Minifigure scale models in the style of the Modular Buildings series. It includes inspirational photos, architectural tidbits, and detailed instructions to build two large models.

As you explore your passion for architecture further, you may want to illustrate some of your ideas before trying to build it using LEGO. I also strongly suggest you bring a notebook while traveling, as you can better understand a building when you slow down and draw an illustration of the overall massing, or specific architectural details. A grid makes it easier to draw geometric shapes such as architectural drawings, but the lines on typical graph paper can be distracting. A dot grid is a perfect balance, offering a grid when you need it, but without interfering as much in your drawings. I prefer the smaller a6 size for travel, and the larger A5 size for research and sketching.

Some people prefer a pen, but pencils are erasable, making them perfect for experimentation. This excellent drafting pencil is inexpensive and it features a retractable tip to hide and protect the sharp metal point when traveling.

Want to learn more about Architecture, or find a really cool building that inspires you to re-create it using LEGO? There are a ton of great books, magazines and videos where you can find inspiration, here are a few of my favorites…

I love being able to see a building from many different angles – that’s why I’ve taken so many architecture tours while traveling. Unfortunately I can’t visit every building in person, and the next best thing is to see it in the Architectures video series. Each episode explores a single building in depth, and the series spans a wide range of styles. It doesn’t get much better than the world’s best documentary filmmaker exploring America’s most influential architect in this in-depth 3 hour miniseries. The series explores the life and life work of Frank Lloyd Wright, across three reinventions of his architectural legacy.

If you are relatively early in your exploration of Architecture, it’s great when you can find a book that explores a wide range of important buildings with enough detail to entice you to learn more about the buildings that capture your imagination. Great Buildings is a great place to start, it helped me select which styles I wanted to cover in my book, The LEGO Architect.

Splurge: I have long had my eye on two anthologies of global architecture, which have been published by Phaidon books. 20th-Century World Architecture: The Phaidon Atlas explores 750 iconic buildings spanning 100 critical years of architectural history. The Phaidon Atlas of 21st Century World Architecture covers the first 10 years of the 21st century. To be clear, these are very large books; with a size of 12″ x 18″ they are about twice as large as a typical hardback book.

What are your favorite current LEGO Architecture sets, books, or accessories? Please let me know by leaving a comment below!