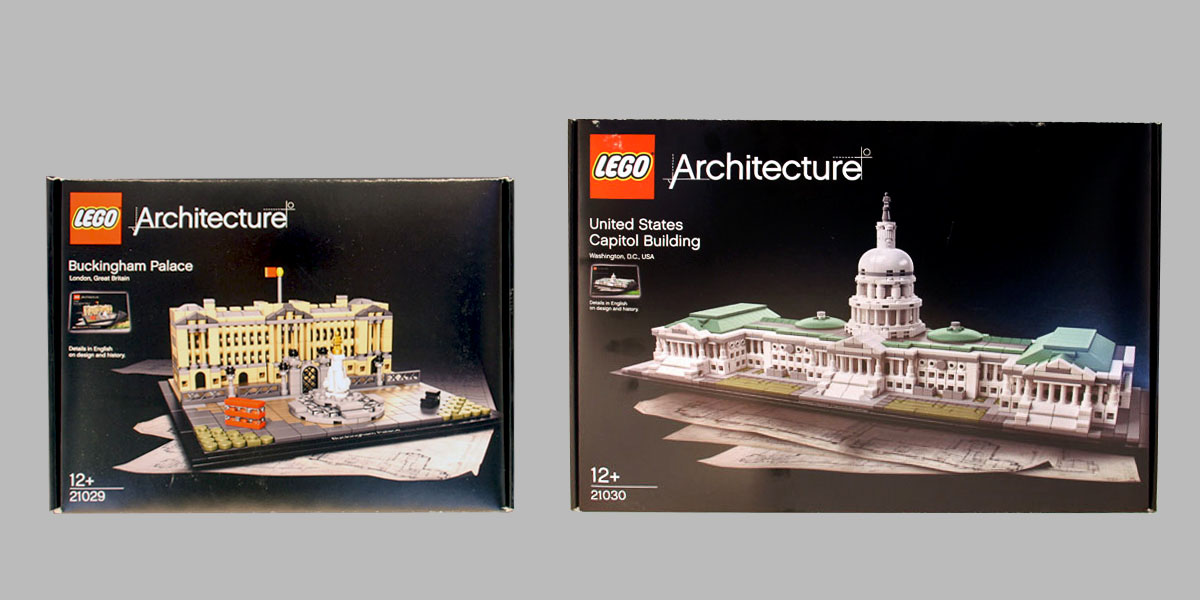 At the Nuremberg Toy Fair, two additional new 2016 LEGO Architecture sets were officially announced: #21029 – Buckingham Palace, and #21030 – The United States Capitol Building. It was widely known that these were coming out later this year, but we didn’t get to see photos of the new sets until today. These are exciting additions to the LEGO Architecture series, and represent two iconic global landmarks. The Buckingham Palace model looks like it’s nearly the same size as the recent #21024 – Louvre, which was just released in 2015. The set has some nice building techniques, including the sideways stacked plate technique which was also used in the Imperial Hotel set. (This takes advantage of the fact that the height of 5 plates is the same as the width of two bricks.) Another interesting observation is that the main building is an odd number of bricks wide. The model must be attached to the base using Jumper plates to achieve this effect. This allows the central entrance of the building to be 5 bricks wide, which is convenient for building symmetrical sections with a gap in the middle for the main doorway. Clever tricks are used to achieve all 6 columns in that central section, using what looks like a mix of Door Rails, and Bar 4L attached using clips. I am excited to say that the model is a pretty close match for the real building. They were able to capture all 6 columns in the central section, and all four columns on the two wings. The number of windows is correct, too, with 7 windows on each side. This is a pretty high degree of accuracy for models in the series. The horizontal proportions between the columned sections and the wall of windows is good, but the building is too tall for the width. This would be tricky to fix without losing a row of windows.

Tan is commonly used in LEGO Architecture series to represent a wide range of “stone” colors, but it continues to be an imperfect match. I’m also a little disappointed by the statue which is crudely modeled using four tooth bricks.

If you like the models in the LEGO Architecture series, you’ll love my book The LEGO Architect. It shows you how to build the 7 most important architectural styles using common LEGO bricks (with clear, beautiful instructions!)

The LEGO Architect is published in English, Français, & 日本語.

I am especially excited by the US Capitol Building set! It’s a really good looking model which captures a ton of details from the real building. We haven’t seen any really big LEGO Architecture sets since the 2013 release of #21017 – Imperial Hotel (and that set was recently retired.) By my count, the base is 56 studs wide and 14 studs deep, with the bulk of the model about 6 bricks tall, and the tallest portion is around 17 bricks tall.

The roof detailing is quite interesting, utilizing a variety of dish, round and sloped pieces to mimic the various roof features. I think it is one of the more effective roofs for a set in the series, giving the model interesting details to enjoy for several angles. The exterior facade utilizes a ton of headlight bricks, which is effective in re-creating so many windows, but feels a little unpolished to me.

If the price for this set is good, LEGO architecture Studio enthusiasts may find that this is a great set for parts, as it clearly contains a huge collection of white bricks, notably well over 100 of part #4070 – 1×1 Brick w/ Headlight, since they cover the front and sides of the building. The model is pretty faithful to the source material. The 16 columns across the center of the real building were reduced to just 12, but this has little negative effect on the composition. The model looked a little short to me at first glance, but it is actually looks like the proportions are quite accurate. I haven’t been this excited for a new set in the series in years!