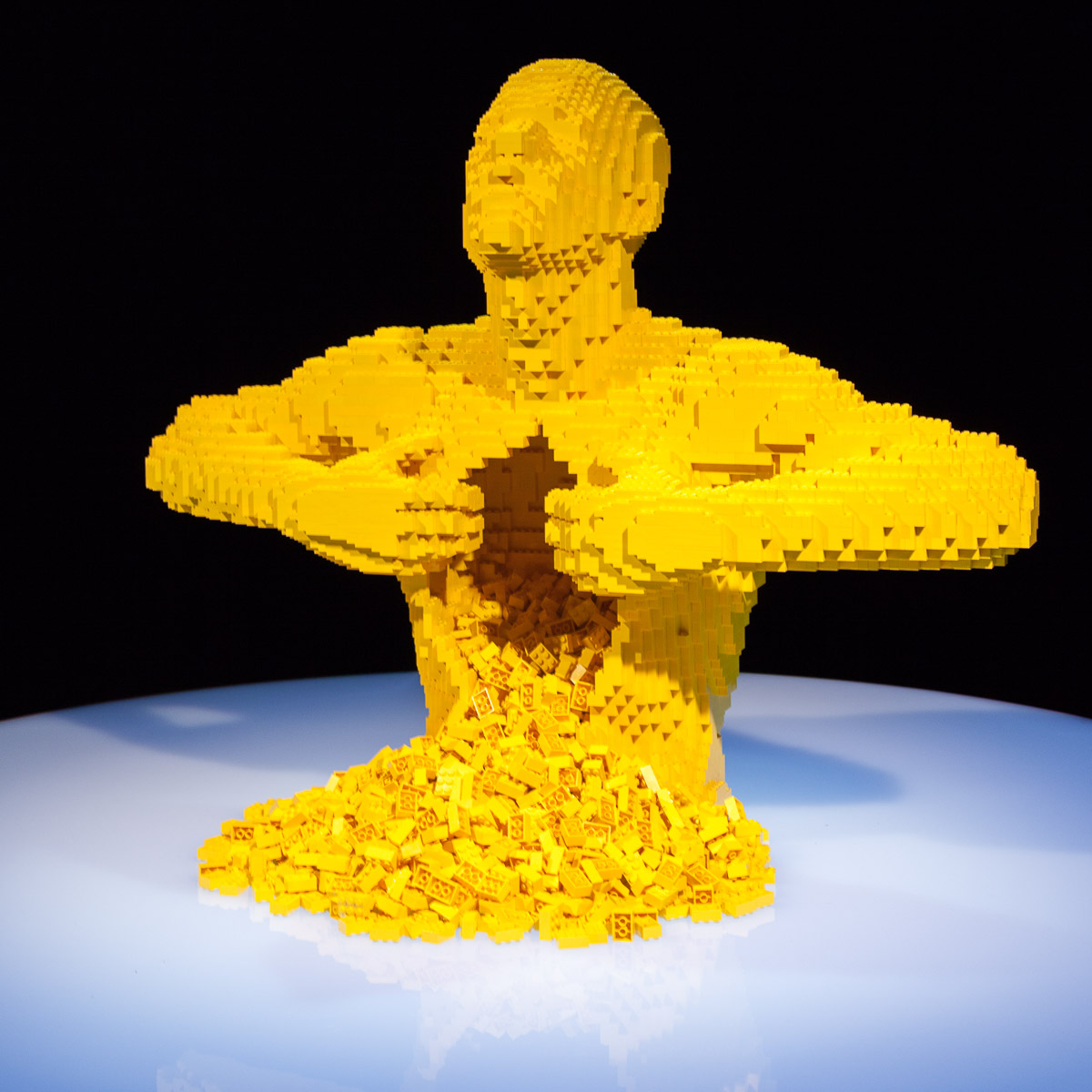 ‘The Art of the Brick’ exhibition by Nathan Sawaya

LEGO meets fine art in this amazing collection of sculptures on display at the Pacific Science Center in Seattle, WA.

I am excited that “The Art of the Brick” has finally arrived in Seattle. It is an amazing collection of LEGO art by the incredibly smart and talented artist/sculptor, Nathan Sawaya. I had the fortune of seeing the show in June 2014, and the opportunity to preview the new exhibit in Seattle on May 26th, 2016. It was a pleasure to see the collection a second time, and I will probably visit one more time before the show closes on September 11, 2016. “The Art of the Brick” exhibit at the Pacific Science Center in Seattle, WA.

The show is great for all ages: It is simultaneously a serious art exhibit by a skilled artist, and an diverse exhibit of large LEGO creations. The subjects range from re-creations of famous works, to creative and complex sculptures based largely on human forms, and closed with some mixed media projects which juxtapose LEGO models in the real world. It is a large exhibit which will take at least 30 minutes to fully internalize.

NOTE: If you are planning to visit the show soon, please consider viewing the show with an open mind and coming back to read this article afterwards. I have included my own interpretations of some of the works, and I wouldn’t want these photos of the art to decrease the experience of seeing it in person for the first time. I also included photos of the new piece which he created just for the Seattle show, so if you don’t want to be spoiled, you were warned.

Introducing the work of Nathan Sawaya

The Art of the Brick opens with a short video which provides context about both Nathan Sawaya himself, and the global phenomenon created by his traveling exhibits. It is clear from the video, and from my conversations with Nathan that he sees himself as a serious artist who just happens to have been the first person to recognize that the ubiquity of the LEGO brick, coupled with it’s unique ability to connect with people of all ages (especially kids) makes it a perfect medium to create serious artworks that connect with audiences in a different way than more traditional medium. It all starts with one brick…

What’s even more striking is that he creates all of these complex forms using only the most common LEGO Elements, mostly bricks and only occasional plates for the finest details. With a growing selection of LEGO elements perfect for creating increasingly complex shapes, it is neat to see how firmly he has stuck with the most basic elements, while still creating complex, dynamic forms. It couldn’t be clearer when you see the whole gallery that he is a talented sculptor with an amazing eye, and I think he would still be a successful artist if he had chosen a more conventional medium.

The first couple rooms include a collection of LEGO re-creations of famous artworks built using LEGO bricks. The first selection of images are similar to the pixel-based LEGO mosaics which are common at LEGO conventions, usually built out of 1×1 plates which are either stacked vertically, or arranged with the stud facing the viewer. In his case, most of the pieces are stacked vertically to hide the studs, also allowing finer details in the pieces. Fragment of the Bayeux Tapestry.

Some of them are literally flat, but my favorite is a LEGO re-creation of “The Great Wave off Kanagawa”, which leverages a few levels of depth. This allows the image to pop right off the wall, and the studio lighting creates interesting shadows off the projecting sections. “The Great Wave off Kanagawa”

As we enter the second room, we see a transition from 2D re-creations of paintings to pieces which explore how a famous artwork might look in a 3-dimensional scene. I especially like how he created fully realized 3D sculptures of the two figures and pitchfork in “American Gothic”, and placed them in front of a brick-built 2D backdrop. The final collection of LEGO re-creations of famous artwork is a large room of sculptures ranging from a massive Easter Island stature to the most famous sculpture of all, Michelangelo’s ‘David’. I am certain that he spent immense amounts of time on the challenge of dutifully re-creating the pose and the details of the face within the limits of the LEGO brick, and the effort pays off in a strikingly realistic re-creation which captures the mood of the original. The highlight of the show for me is the collection of unique sculptural pieces from the heart and mind of Nathan Sawaya. The range expressed in these pieces is huge, from simple Still Life scenes, to a moment of motion captured in time, to emotionally complex explorations of the human form. The first room includes some calm subjects including a still life of an apple, and a sculpture featuring a small human form wielding an oversized pencil. In the room which follows, the centerpiece is a beautifully designed and beautifully lit sculpture of a blue humanoid form midstroke while swimming. All we see is the part of the body above water, with loose brick creating the illusion of water and motion. This is a striking example of motion captured in a still form. The strongest sculptures are those which are missing something important. This includes his most famous work, simply titled “Yellow” where the human form is ripping their own chest apart and LEGO bricks spill out onto the table. This sculpture, simply called “Yellow” is his most famous.

Similarly striking are the models which are faceless, hollow, have hands which have fallen off, or strong imagery of a crowd of small figures. All of these sculptures seem to be drawn from real fears that Nathan is exposing through his art, but there is plenty of room to add your own interpretation to these “open ended” sculptures. The last large room features a selection of brick-built LEGO “props” which were then photographed in a variety of different scenes. This includes a pail, a red dress, an umbrella, and a few clouds. I do not personally find this collection to be the strongest part of the exhibit, probably because I feel like the sculptures work best on their own, and this extra level of coding does not make for a stronger piece of art. That said, even these more mundane pieces are artfully constructed and beautifully arranged in the gallery. The last room features objects such as a dress, bucket, and umbrella.

Some years ago, Nathan started a project where he built small human forms with arms which he attached aroudn fence post, trees and the like. The gallery includes three of these forms with arms wrapped around fake trees. They are built using bricks that have been sighed by visitors to his past exhibits. “Hugman” created with bricks signed by guests to his previous shows.

As I understand, it has become a tradition that Nathan creates a unique art piece for each city hosting his exhibitions. For Seattle, he created a very dynamic composition featuring our favorite fish – the Salmon. In this composition, we see 5 mature Sockeye salmon swimming upstream, with one “rainbow” salmon swimming in his own direction. I enjoyed the piece as a whole, due to the dynamic motion which is captured in forms of each fish, as well as appreciating the reference to both Seattle and the cultural trends of unique perspectives as well as the strong regional push for LGBTQ rights. If you are excited to see Nathan’s work but don’t live in Seattle, visit Nathan’s website at http://brickartist.com/exhibitions/ to see when there will be a show near you. Want to see more of Nathan’s amazing sculptures, you can buy his book The Art of the Brick, A Life in LEGO from Amazon.

As you leave the exhibit, you will find a well stocked gift shop with a great selection of LEGO sets, souvenirs and books. I was excited to see that they have lots of copies of my book, The LEGO Architect available for sale too.