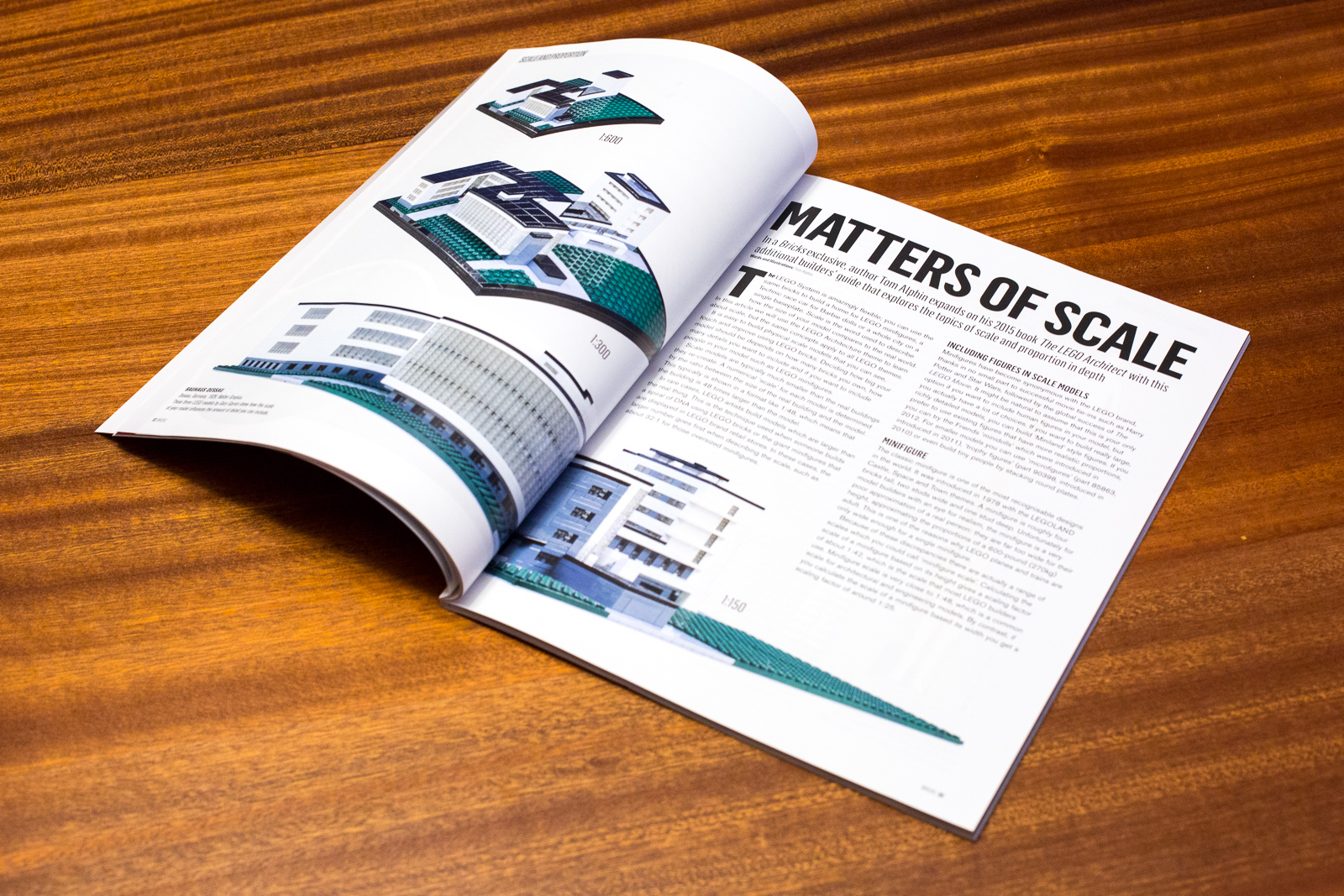 This article explores how to create great LEGO models at any scale. The article expands on the brief introduction to scale on page 175 of my book, The LEGO Architect.

Nine months ago, my book ‘The LEGO Architect’ was published by No Starch Press. It has been a tremendous pleasure to see the warm response from both the LEGO and Architecture communities, and I have spent a lot of time since then supporting the book release by doing book signings, talks, attending LEGO conventions, and even a radio interview.

I am excited to share some new content related to LEGO and architecture! The brand new 13th issue of Bricks Magazine includes two sections which I wrote: a new article I wrote about Scale, and instructions to build a nanoscale LEGO model.
The magazine gives me a chance to continue the story I started with my book. Issue 13 of Bricks Magazine has a focus on LEGO Architecture.

The 6-page article explores the topic of Scale in LEGO model building in depth. It begins with an introduction to the concept of scale. The bulk of the article explores how to include figures in your LEGO models, including the range of scales from rather large Miniland figures all the way down to the tiny new Trophy fig. Opening spread of my article about Scale in LEGO Models.

The opening spread helps readers understand how a larger scale can allow you to add more detail, thanks to three models of The Bauhaus (1926, Dessau, Germany, architect Walter Gropius). LEGO Artist Gary Garvin created three models of the building at roughly 1:150, 1:300, and 1:600 scale. The 1:150 scale model is most detailed since it is the largest, but my favorite is the middle size as it has a good level of detail in a reasonable sized model. The article includes lots of illustrations including this one exploring proportions of the classic LEGO minifigure.

I take pride and pleasure in finding the right way to convey my ideas through a combination of photos, text, and illustrations. For this article, I created several illustrations to help readers visualize the concepts covered in the text. These illustrations showing the absurd proportions of the classic LEGO minifigure are fun. (Did you know that a 6′ tall human with minifigure proportions would be around 600 pounds?) Illustration showing the sale of each common LEGO figure type.

The second illustration shows the various LEGO figure types in detail. I ensured that this illustration appears “Actual size” in the magazine as it reinforces the huge difference between the 1:17 scale commonly used to create Miniland figures, versus the 1:130 scale for the recently released Trophy Fig LEGO element.

Learn more about Scale: I created a companion website for the article that explains how these scaling factors were calculated. To learn how to calculate scale for common LEGO figure sizes, visit http://brickarchitect.com/scale/

I am also excited that the same issue features my instructions to build a nanoscale re-creation of the Geisel Library at UCSD (San Diego, California.) Detailed instructions to build a nanoscale model of the Geisel Libray.

I am really happy with how this came out as well. I took the opening photo in my front yard, and I love the juxtaposition of the verdant garden and the LEGO model. The instructions follow the crisp style that I used for the instructions throughout my book. I would have liked to use the same fonts that I used in my book because they more closely match official LEGO set instructions, but Bricks prefers to stick to a pretty strict set of fonts in their magazine which is understandable.

This is a great issue for LEGO Architecture enthusiasts. The cover of the issue is the newly released Big Ben model in the Creator Expert series. There is also a review of the 2016 Burj Khalifa set in the LEGO Architecture series, which is a re-intepretation of the poorly received 2011 version. The issue has a ton of articles for LEGO architecture enthusiasts.

Not only will you get to enjoy my article and instructions, but there are two additional features looking at two talented LEGO Architecture builders who are also featured in my book. In ‘Skyscraper Secrets’, we get to see some of Rocco Buttliere’s amazing 1:650 scale skyscrapers. The coolest part is that the article includes insets showing some of the tricks he employs to create such beautiful models. ‘Wonders of Engineering’ looks at Adam Reed Tucker’s new exhibit at the Museum of Science and Industry.

In the article ‘Wonders of Engineering’ we get to see some of the amazing and diverse models that LEGO Certified Professional Adam Reed Tucker built that are on display in a new exhibit at the Museum of Science and Industry (MSI) in Chicago, Illinois. I am pleased to say that I saw the show while visiting Chicago for Brickworld 2016, and I hope to share more detailed thoughts on the exhibit sometime soon. Advertisement for my book in the magazine.

The magazine also offered my first chance to design a full-page magazine advertisement for my book. I hope that it captures the attention of their readers and helps more people discover my book. (If you haven’t learned about my book yet, please visit http://brickarchitect.com/book/ )

Learn how to create amazing architecture using LEGO in my bestselling book, The LEGO Architect. Clear instructions show you how to build the 7 most important architectural styles using common LEGO bricks, and photos of amazing LEGO Architecture will inspire you.
The LEGO Architect is published in English, Français, русский, & 日本語.
I hope you can find a copy of this excellent issue of Bricks magazine. Once you do, let me know your thoughts by leaving a comment below.