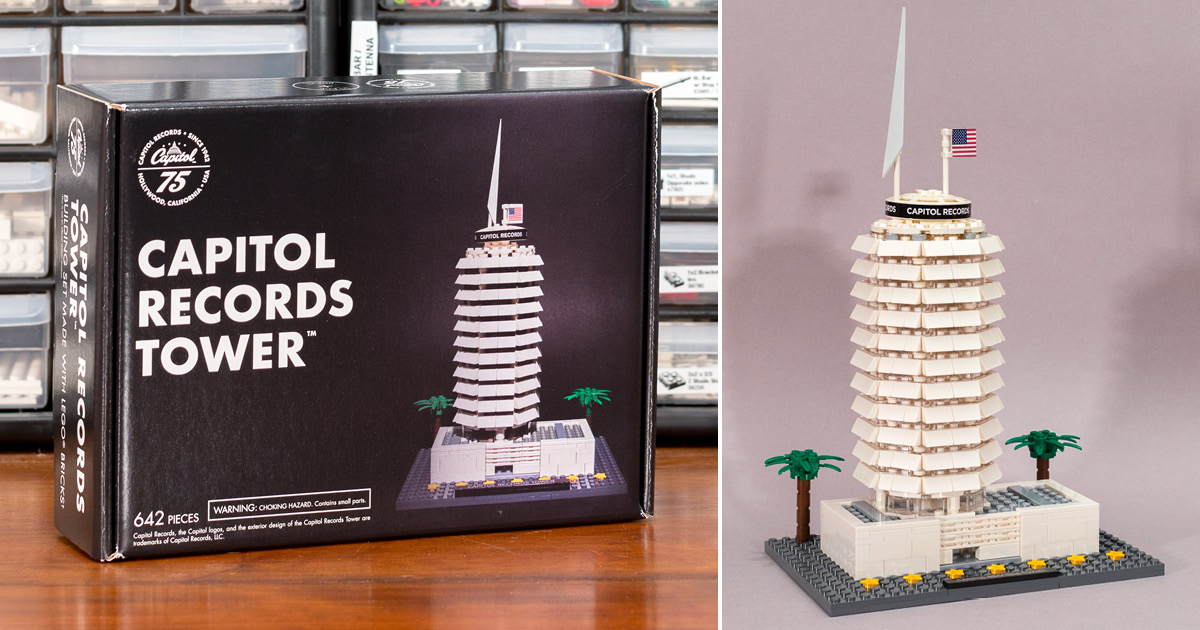 Can this “unofficial” LEGO set based on the iconic Capitol Records Tower in Hollywood match the quality of the official LEGO Architecture sets? Let’s find out!

This is the first time reviewing an “unofficial” LEGO Set here at Brick Architect. It is unofficial because it was not designed by The LEGO Group, but that doesn’t make it any less interesting to LEGO Architecture enthusiasts. This Capitol Records Tower set was designed by Adam Ward, a talented freelance LEGO Artist who can be found at his website Peace + Bricks. When he isn’t busy working on commissioned projects for companies like Microsoft and Nestlé, he can be found working at “Bricksburg” — the studio in Hollywood where the LEGO movies have been created. (I’m hoping to conduct an interview with Adam for a future article.)

Capitol Records Tower is an iconic round tower which was designed by architect Louis Naidorf. Many people believe that the circular design and spiked tower are meant to evoke the appearance of a stack of records, but this is just a happy coincidence; the architect proposed the round shape to reduce the building’s construction costs and air conditioning needs. Construction was completed in 1956. For more information about the building: Wikipedia, Los Angeles Conservancy.

In addition to offices, the building houses several recording studios including three “echo chambers” used to record artists such as Frank Sinatra, The Beatles, and The Beach Boys. The model was created by Adam Ward for Capitol Records to commemorate the 75th anniversary of the company. It is a custom kit containing real LEGO bricks, stickers, one custom LEGO compatible part, and a high quality box and manual. The packaging is faithful to both the quality and styling of the official LEGO Architecture kits. Unfortunately, he did not include a section at the front of the instructions about the real building, so you will need to rely on a short blurb on the back of the box, the previous section of this article, or your own research to learn more about the building’s history. The kit contains 642 pieces, making it about the same size model as many of the standalone buildings in the LEGO Architecture series. It is somewhere between the size and scale to the #21018 UN Headquarters (596 pieces) and the revised #21035 Guggenheim Museum (744 pieces). At least for now, you can purchase the limited-edition set from Capitol Goods for a price of 200$. (It is completely fair to acknowledge that this is significantly more expensive than official sets with a similar number of parts, but remember that each set is handmade using brand new parts that need to be ordered from LEGO re-sellers like bricklink.)

NOTE: If you are planning to build the model, you might want to stop reading here, since the next section takes an in-depth look at the build process.

The model is built on a sturdy base made with two layers of plate, with a total size of 16 x 24 studs. I would have preferred if the model used the same technique as the official sets, with a black tile border around the whole model, but this approach works fine. The sturdy base is two plates thick.

The instructions are very similar to official LEGO sets, with clear indication of which parts are required for this step. I was amazed to see that the parts were sorted into 8 bags following the build process—LEGO Architecture sets are rarely sorted into numbered bags. The building instructions highlight the parts added in each step using a yellow color.

New parts for each step are highlighted in yellow. This makes the build process easier, but the yellow highlight is not attractive and it’s harder to see the individual pieces.

While most of the instructions are clear, the following steps might be a little confusing: The corner panels need to be slid in from the top.

Assembling the 8 panels requires some patience, as these panels are not very sturdy. That said, once the panels are installed and the quarter round plates are attached at the top, it becomes quite solid. It’s neat to see how the model gains rigidity in these final steps. (One thing I couldn’t figure out is why the brackets on page 24 alternate every two rows instead of every row; it seems like the sub-assembly would be stronger if it alternated each row.) The set includes a custom part for the top of the building, but it is fragile so be careful.

It’s also important to note that this kit includes a custom LEGO-compatible part which is used for the tower. The part is thoughtfully designed and clips to the standard LEGO Bar component with ease. There are a couple notes worth mentioning about this custom part. For one, the color isn’t quite the same as White LEGO bricks. Also, the spike is very slender, and the tip of mine was slightly bent. I tried to bend it back to straight, but the tip broke off instead. Aside from having custom parts molded instead of 3d printed to increase durability, I would suggest that the part should be a little shorter, with a rounded tip instead of a sharp tip. This won’t affect the appearance of the finished model. Unlike the official LEGO Architecture kits, this set includes a few stickers instead of printed parts. I do not like stickers and rarely apply them to the models I build, but I decided to try them as part of this review. I am extremely pleased to report that these are top quality stickers with sharp details, clear text, and a nice glossy finish. It looks like they were printed on a plastic material instead of the paper stickers which come with LEGO sets. (Adam confirmed they were printed on vinyl.)

This felt a lot like building an official LEGO Architecture kit, which is a really good thing. It was very satisfying to snap the eight panels into place using the 4×4 quarter-round plates on the top. The finished model is faithful to the real building, and the build process helped me understand the real building better.

This is a very good set that captures the spirit of this iconic landmark pretty well. This is especially challenging because round shapes are notoriously difficult to re-create using LEGO. The finished model looks great, especially after applying the stickers (which are very effective at reinforcing the building’s identity.)

I am pleased to say that the model includes all 11 stories of balcony in the real building, and the model’s overall proportions are very close to the real thing. I do wonder if it’s possible to make the tower appear more round without making the model larger by using more than 8 panels. (At least in theory, you could create a model with 14 sides instead of 8 sides while preserving the existing diameter of 28 studs.) The box, manual, and stickers are all of excellent quality rivaling the official sets. (Do be careful with the custom part, as it is fragile.) This is a very professional package by a talented LEGO artist. Remember that the set was designed outside of the LEGO Group’s review process, which is probably why there are a number of places where the instructions aren’t as clear as I would have liked—but nothing that is likely to prevent an experienced LEGO Architecture builder from figuring out pretty quickly. It’s also important to acknowledge that like many of the official LEGO Architecture kits, assembling the tower can feel a bit repetitive. (This is a common critique with LEGO Architecture models.) The greatest pleasure for me was to step inside the mind of a talented LEGO artist outside of the LEGO Group, and learn new techniques to create amazing LEGO Architecture. The model includes a nice variety of traditional and SNOT Techniques, but the most interesting part was seeing how a rigid tower was built using the eight panels which aren’t connected to one another.

In closing, this is an excellent set which is on par with earlier sets in the LEGO Architecture series, and comes close to the quality of the latest sets. The high quality packaging, instructions, and stickers set a high bar for future unofficial LEGO Architecture sets.

This set is recommended for people who already have all of the official LEGO Architecture sets, or people who have a connection with Los Angeles. You can buy the 642 piece set at Capitol Goods for 200$.

Disclaimer: Set provided by Adam Ward / Capitol Goods for this review. The words, photos, and opinions in this article are strictly my own.