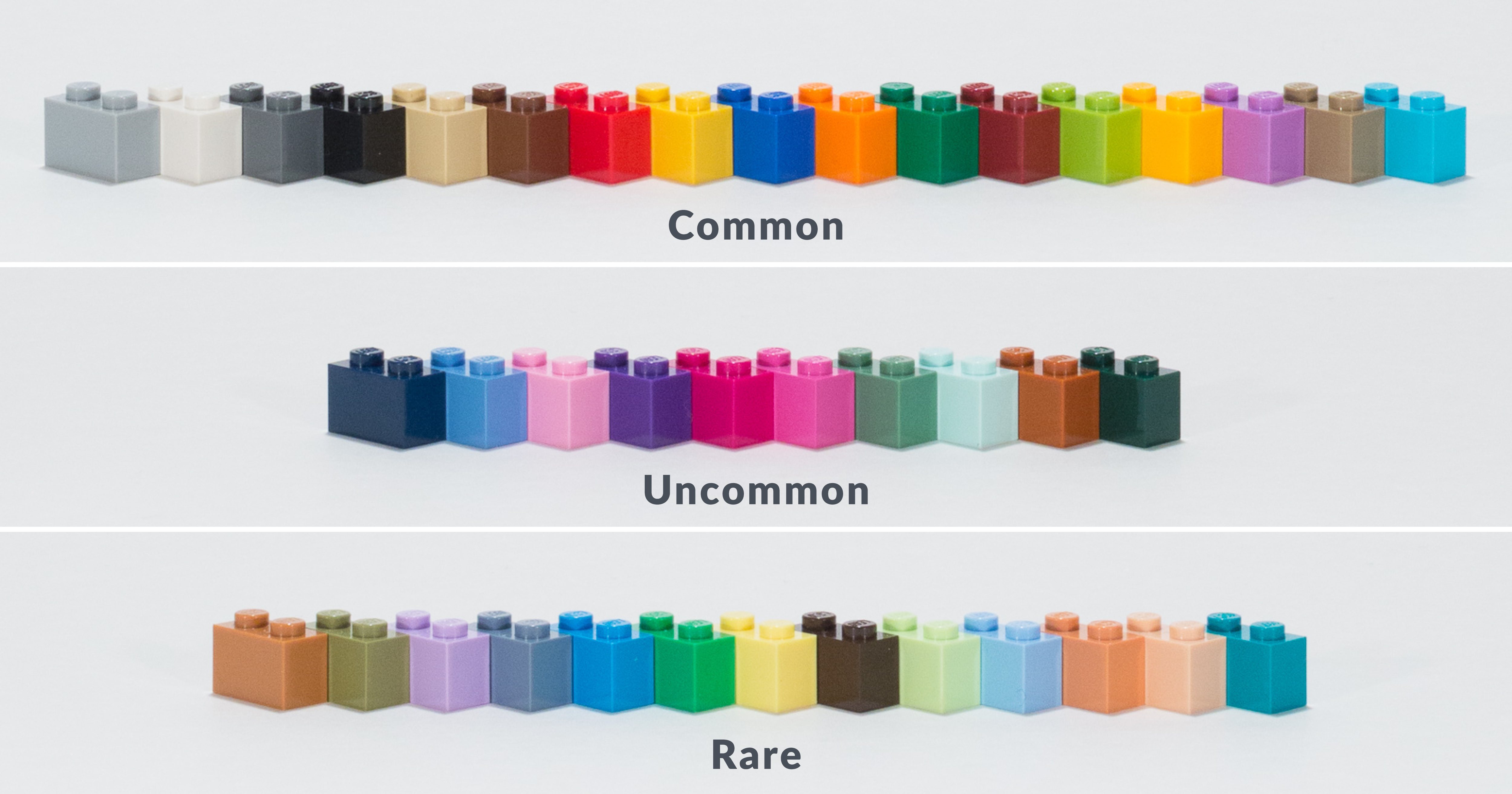 Hard-to-Find LEGO Colors (and what to do about it)

Bringing back one retired LEGO color in 2018 raises an important question—how useful are the 39 colors that we already have? Let’s see how many colors are available in enough different parts that you can actually build what you want!

Tom Alphin
·
Colors · Storage
Update January 31, 2018: The topics explored in this article were featured in a recent episode of the All Sorted podcast. I highly recommend listening to the podcast after reading the article—the podcast reinforces the main points from this article, and you can listen to it in the car.

Back in December, it was revealed that a color was added to the 2018 LEGO Color Palette, bringing the number of solid colors in current sets to 40. It isn’t actually a new color; they brought back 107—Bright Bluish Green (BrickLink: Dark Turquoise, Common Name: Teal.) The color plays a major role in the new #10260 Downtown Diner set, although you can also find it in 2018 Elves and Disney sets. #10260 Downtown Diner is the first set since 2005 to include parts in color 107—Bright Bluish Green (Dark Turquoise/Teal).

Rather than just celebrate that we now have one more LEGO color to choose from, let’s take a deeper look at the existing solid colors to see how easy it is to use the 39 colors we already have.

All colors are not created (in) equal (quantities)

In this article, I have done a detailed analysis of which colors are most common in sets from the last 5 years. This has been done before, which is why I took the analysis one step further and looked at the 24 most common basic bricks/plates/tiles as a way of gaining insight into not only how many parts are made in each color, but which colors are offered in the widest selection of useful parts. The 10 most common colors account for nearly 80% of LEGO Bricks.

What we find is that the 10 most common colors account for almost 80% of the LEGO bricks which are produced every year. Since the remaining 30 colors make up just 20% of the parts being produced, the remaining colors range from relatively uncommon to very rare.

Percentages based on buying one of every set released in 2013-2017, and sorting the 24 most common bricks/plates/tiles by color.

This article looks closely at these less common colors, and helps you understand how to make the most of each of these colors in your MOC’s. To keep the conversation manageable, we will only look at the 24 most common bricks, plates, and tiles, although the same patterns play out across the whole range of parts.

It would be easy enough to sort all of the colors by the quantity of parts produced in each color, and somewhat arbitrarily draw lines between those colors which are common, uncommon, and rare. Instead, I added a second dimension to the groupings—In how many common parts does each color come?

Quantity of common Bricks, Plates and Tiles in each color, if you bought one of every set from 2013-2017.

Amazingly, none of these 24 common parts are currently available in all 40 solid colors. This means that LEGO artists who choose less common colors will need to work around situations where the part they need is not available in the color they want to use.

While it isn’t the focus of this article, some of the workarounds include: re-designing the model, using a similar color, buying horribly overpriced non-production parts, or even cutting parts to a smaller size.

That’s why it’s beneficial to break the color palette into categories:

17 colors are available in all but two of these common parts.

In addition to the classic LEGO colors, a few relatively new colors are already available in most common parts:

Next, we see the colors that are frustrating because between 4 and 9 out of the most common 24 LEGO parts are missing. You also need to remember that many of the specialty parts which are popular for adding smaller details to LEGO models are not available in these colors. These 10 colors are really frustrating, because they are missing a number of common parts. (All of these colors were introduced in 2000-2004.)

To be fair, some of these colors will be more frustrating than others. (For example, it’s harder to workaround the lack of a 1×1 part than the lack of a 1×2 part, since you can often use two 1×1 parts as a substitute.)

Lastly, we look at those colors which remain very rare across the 24 common LEGO parts analyzed here. In some cases this is explained by the color’s purpose—two of the Nougat (Flesh) colors are used extensively for minifigure hands and heads, but rarely used in other places. Many of the other cases are likely attributable to colors which were only recently added to the palette. The remaining 13 colors are rare enough that you can only reasonably use them for accents.

Surprisingly, not all of these colors are new. 135. Sand Blue has been around since 2001, but still only comes in just 12 of the 24 parts listed here. (This is unfortunate; low saturation colors add realism to MOC’s.) 312. Medium Nougat is another odd example, since it is relatively common in bricks, but very rare in plates.

A second way to look at the color palette is to consider which colors are cheaper and more expensive to buy. Not surprisingly, the most common colors also tend to be the least expensive, but there are some unexpected surprises when you dig in to the data.

Current prices for common Bricks, Plates and Tiles in each color.

All prices are based on the sales from the Last 6 Months on Bricklink of new pieces in larger quantities. (Data pulled 2018/01/12)

The charts also show that the most common colors are often the least expensive colors. This makes sense, since they are available in much greater quantities.

That said, there are a couple relatively common colors that are significantly below the average price (for the 24 common parts explored in this article):

I found it a bit surprising that despite massive production volumes, the four most common colors are not significantly below average price. 194—Medium Stone Grey (Light Bluish Gray), 1—White, 199—Dark Stone Grey (Dark Bluish Gray), and 26—Black are only between 5% and 15% below average prices. I think it’s because these are popular colors for MOC’s, and supply is doing a good job of matching demand.

There are only three relatively common colors that are more than 50% above average prices. All three are relatively low-volume colors, and I think the prices are high because they are popular colors for MOC’s.

While a specific part in a specific color might be particularly expensive, the majority of colors cost roughly the same price. That said, you might want to do a little research before getting your heart set on a particular color for your next big build—you might find the parts you need don’t exist or are more expensive than you had hoped!

You also might notice that there are quite a few part/color combinations that haven’t been produced recently, but are available on BrickLink to purchase. This could be due to a number of factors including: it was included in sets more than 5 years ago, it was incorrectly listed on the site, or it was never included in a LEGO set, but a handful escaped the factory through various channels (including LEGO employees, or the design studios at LEGOLAND theme parks.) These are called non-production color parts.

A few of the many parts which you can buy on BrickLink even though they don’t appear to be included any current sets:

This analysis has changed how I look at my collection—I’m focusing my attention on filling in gaps in the most common colors, and only those uncommon colors which are most useful for building Architecture models. The data reinforced my inclination to continue avoiding the rare colors, because finding the parts you need is difficult and expensive. (I’d be happy to see 135—Sand Blue, and 308—Dark Brown become available in most common parts.)

How will understanding which colors are Common, Uncommon, or Rare will impact your LEGO collection or your models? I’d love to hear—Scroll down and leave a comment below!

This article is the first I’ve seen which measures the usefulness and cost of each color by comparing cost and availability across a set of common parts. I chose to focus on Bricks, Plates, and Tiles, as these are the core building elements required to build almost any model (using System pieces.) In the future, I may cast a wider net to see if any of the colors end up in a different category if we include other common parts in the analysis (such as: Round 1×1 Plate, Cheese Slopes, Grille, Jumpers, Bow.) I also want to see if any of the Transparent, Metallic, or Glow Colors are more common than I think.

Criteria for inclusion in my list of “common” parts included both:

The cost data was pulled from Bricklink using the BrickStock app. This data was saved as a .bsx file, which can be imported into Excel.

STEPS: Create a list of “common” parts with quantity of 1 each, copy/pasted 40 times and modified to include all parts in all 40 colors, “extras > update database”, “edit > price > set to price guide” using options “Last 6 months sales” / “Quantity Average”, Save Changes.

The number of parts for each part/color was derived from the latest data you can download from Rebrickable.

STEPS: I re-created the database structure in Access, added two additional tables to help normalize the data and drive my queries: 1) Table of color names & color ID’s across LEGO/BrickLink/Rebrickable databases. 2) A table of parts that I care about for this report. This allowed me to make a single query listing all elements from all sets from 2013-2017, along with Part ID and Bricklink Color ID.