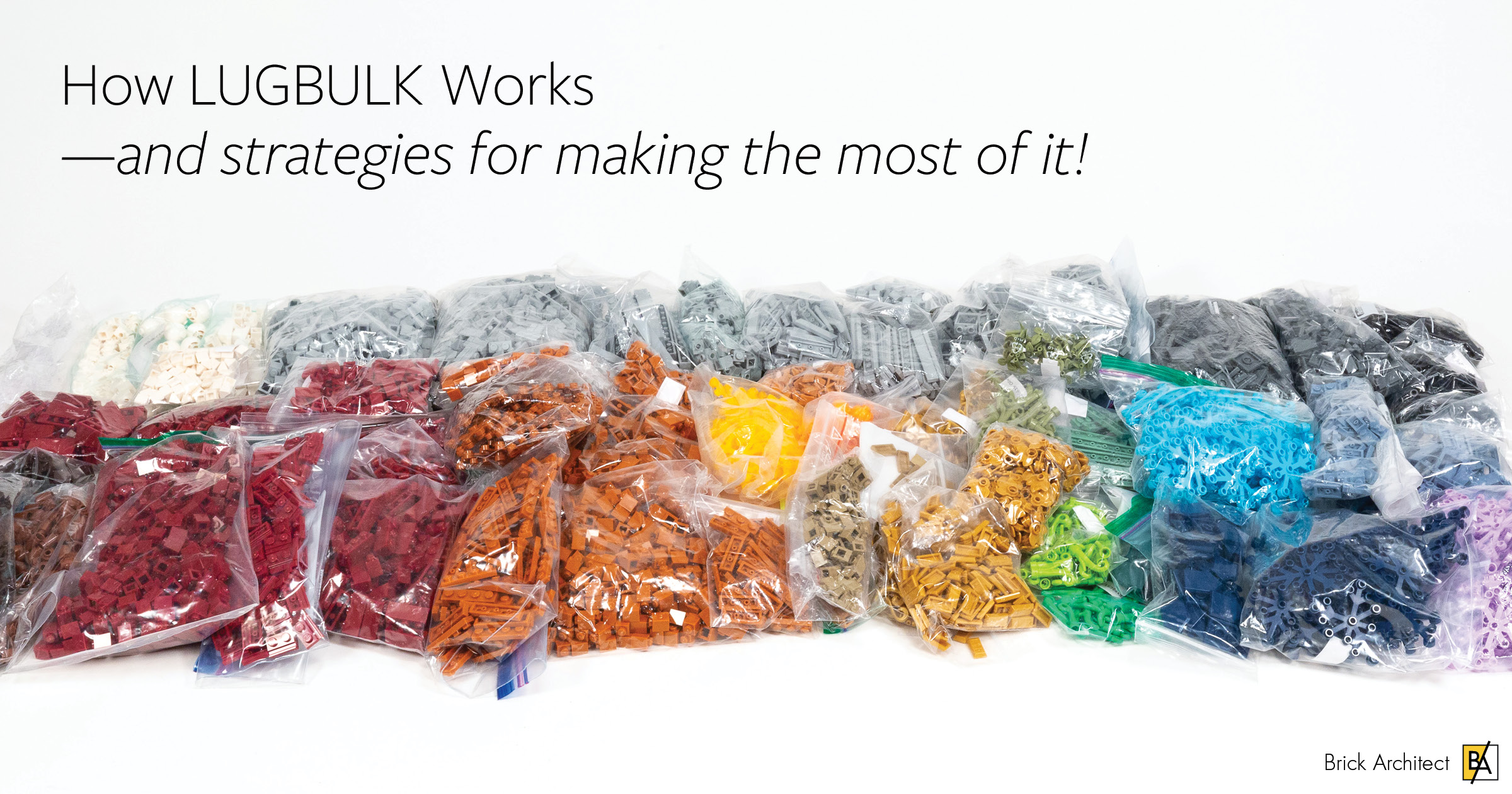 How LUGBULK Works—and strategies for making the most of it!

Once a year, active members of a Recognized LEGO User Group can order LEGO parts in bulk. Let’s learn how the program works—and how to make the most of the opportunity!
By Tom Alphin, author of The LEGO Architect and LEGO Storage Guide.

February 1, 2021: This is a first draft, so feedback is welcome – email me at tom@tomalphin.com!

This article offers an introduction to LUGBULK for people who are not familiar with the program. For folks who are able to participate, it continues with a set of strategies to make the most of this unique opportunity.

Please note that the LUGBULK program can change at any time, and some of the details of the LUGBULK program are confidential. Most notably, participants can not share the list of elements which are available in a given year, or the cost of each element. What I can say is that it’s an easy way to purchase very large quantities of the same element, and it is often cheaper than buying from BrickLink.

Literally speaking LUGBULK is an opportunity for active members of a LEGO User Group (LUG) to buy LEGO elements in bulk. But, what is a LUG, and how do I get involved?

A LUG is a LEGO Users Group, which is typically a group of LEGO fans living in the same region. Many LEGO User Groups meet around once a month to share their love of the LEGO hobby and to organize several public displays a year for members of their community. (Other LUGs focus on a specific topic such as LEGO Trains, but are geographically dispersed.)

LUGs which meet certain criteria can apply for recognition by The LEGO Group. If approved, they become a ‘Recognized LEGO User Group’ (RLUG) and can appoint a representative to access the LEGO Ambassador Network. Once the group is recognized, it can participate in LUGBULK.

History of LUGBULK
James Powell explained to me recently that the Pacific Northwest LEGO Train Club (PNLTC) was the first club invited to participate in a trial LUGBULK program in about 1999, although the program as we know it now began in 2009. (The LEGO Group only established a formal Ambassador Program in 2005.)

You can find a list of Recognized LEGO User Groups at lan.lego.com—It’s organized by location so you can zoom in on a map to find the group closest to you! 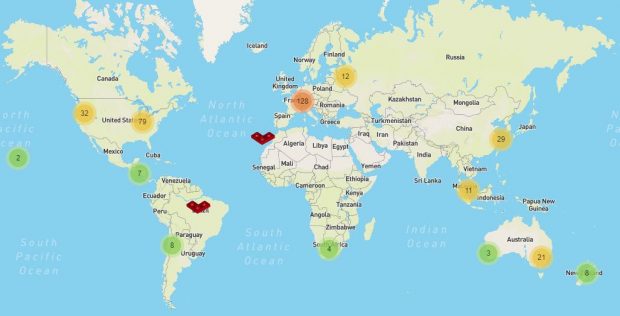 Map showing that there are Recognized LEGO User Groups around the world. (Photo: The LEGO Group)

Please understand that membership in a LUG is a significant time commitment. This includes regular meetings, and helping to run events showcasing amazing custom LEGO creations with your broader community. Because many groups require a minimum membership time and level of participation to participate in LUGBULK, you won’t be able to join a LUG only to participate in LUGBULK. (It could be two years from the date that you join a LUG before receiving your first order!)

The LEGO Group created LUGBULK “To stimulate individual adult fan of LEGO® (AFOL) building activities by providing the ability to purchase loose LEGO elements in bulk.” That’s right… they want to help us, their most passionate adult fans, build something awesome!

The whole process can take 6-12 months to arrive at your ambassador’s address, so this is not a great way to get parts quickly. The parts will arrive in many large boxes, filled with bags containing thousands of the same part. It’s up to each group to find the most efficient process to count the parts and ensure that each participant gets the quantity that they ordered.

While many people think that LUGBULK is meant to be a secret, it’s not Fight Club, and you are welcome to talk about it!

The only requirement is that participants do not share the list of element prices publicly. That’s why this article does not indicate how much you will save when compared to secondary markets like BrickLink.

Strategies for making the most of LUGBULK

Given that your entire group can only order 85 unique elements, the bulk of this article focuses on strategies for making the most of this limited opportunity.

Remember—you can not resell parts purchased on LUGBULK.
While it feels like heresy within the LEGO community to say it, please do not order elements that you will never use (even at a huge discount from BrickLink)! It’s not only a waste of money, but also a waste of natural resources, and you need to find somewhere to store parts that you will probably never use.

The biggest factor in making LUGBULK work for you is to seriously consider what you want to build!

You (and your LUG) will quickly realize that 85 elements is a tiny fraction of the elements which are produced. Thankfully, there are lots of other ways to buy LEGO bricks including buying sets, bulk used brick on Craigslist, or specific parts you need from online marketplaces like BrickLink. Because of the 85 element limit, you should think of LUGBULK as a very strategic supplement to other channels. Let’s see how publicly available data can help you pick the right parts!

The most obvious way to make the most out of LUGBULK is to focus on parts with the greatest discount compared to sites like BrickLink. As mentioned earlier, LUGBULK prices are confidential, so I can not highlight those parts which offer the greatest discount in this article. (That’s an excercise you are welcome to do with the other members of your LUG.)

What I can do is simply highlight those parts, colors, and specific elements which tend to be the most expensive on BrickLink. If they happen to be available through LUGBULK, they are good candidates for saving money. 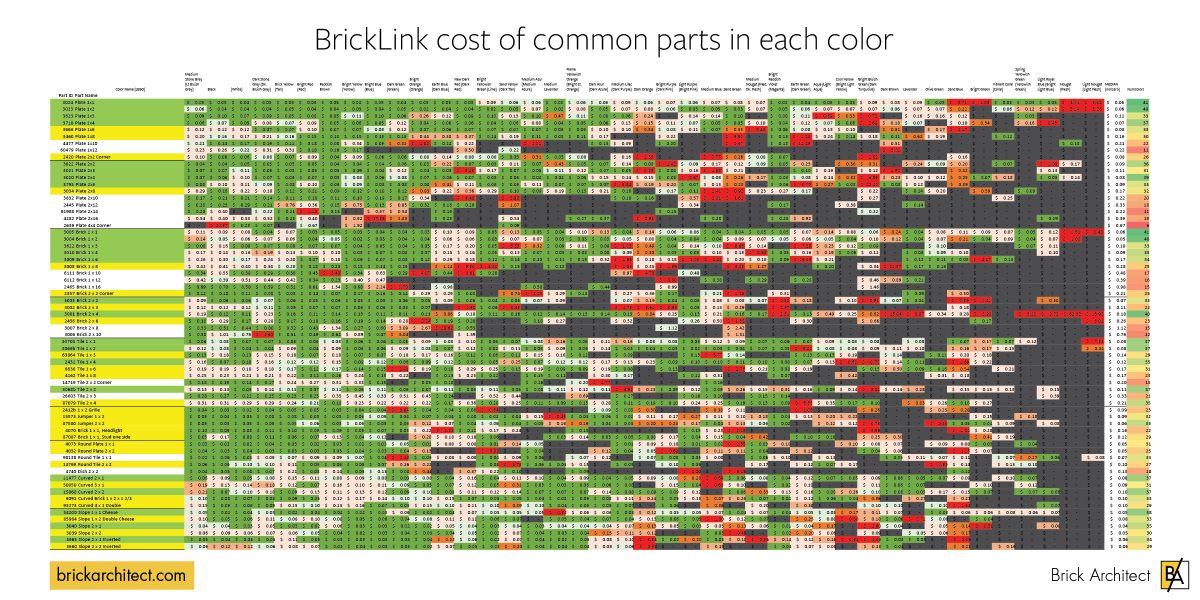 I know that the chart is very large and hard to read. I recommend reading it on the largest monitor you have, and clicking the photo to load a larger high-resolution PDF version of the chart.

Using the chart provided above, we can look for bright red cells, indicating that a given color is more expensive than average for that part.

There are some extreme examples such as a 2×4 Brick (part 3001) in 18NougatFlesh which costs $62.32 per part. Really extreme prices like this are usually caused by a small number of non-production parts escaping the factory and ending up on BrickLink. These won’t be relevant for LUGBULK since non-production parts are not available for us to buy, either.

The color-coding also makes it easy to identify colors which are more expensive than average. Just look for a column that includes a lot of Red and Orange cells.

38Dark Orange and 151Sand Green are good examples of this… While some elements in these colors are not terribly expensive, there are a lot of elements which are quite costly.

Because BrickLink is a real economic market, the standard forces of supply and demand are at play here. I suspect that 106Bright OrangeOrange and 119Bright Yellowish GreenLime are some of the cheapest colors because they are common colors so the supply is high. By contrast, they do not seem to be the most popular colors with AFOL’s, resulting in a lower demand.

Likewise, even though 194Medium Stone GreyLight Bluish Gray and 199Dark Stone GreyDark Bluish Gray are some of the most common colors, they aren’t the cheapest colors. While I can’t know for sure, my best guess is that they are a bit more expensive because they are extremely popular with Castle and Star Wars fans, driving up the costs a bit. 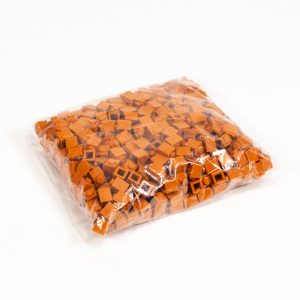 Based on current BrickLink prices, this bag of 400 1×1 Bricks costs $36 in 38Dark Orange, but just $4 in the more common 106Bright OrangeOrange color.

While this chart isn’t optimized for comparing the prices across many different parts, there is an easy way to do an apples-to-apples comparison across basic bricks and plates: the per-stud cost (based on the median price for each part).

The suprising discovery after doing the math is that 1×1 parts carry a significant premium on BrickLink, but there isn’t a huge price-per-stud difference across the rest of the range of 1×2 to 1×8 parts.

It was also interesting to see that the same size brick and plate cost about the same on BrickLink, even though you need three times as many plates to make a similarly sized wall!

While saving money is one of the primary motivations in participating in LUGBULK, it may make sense to include a relatively inexpensive part on your order if you need a very large quantity of that part to build a MOC. For example, there might not be a single BrickLink seller who has the part in the quantities you need. (It doesn’t really matter if the savings via LUGBULK is modest compared to the average BrickLink price if LUGBULK is the only practical way to get it in large quantities!)

While I haven’t done the analysis to highlight elements which are hard to find in large quantities, it is easy enough to find an element that you want on BrickLink, then use the “Minimum Qty” filter to see where you can buy it in large quantities. You may decide to buy from a few sellers to get enough of the same part (or save money)—just don’t forget to consider shipping costs! 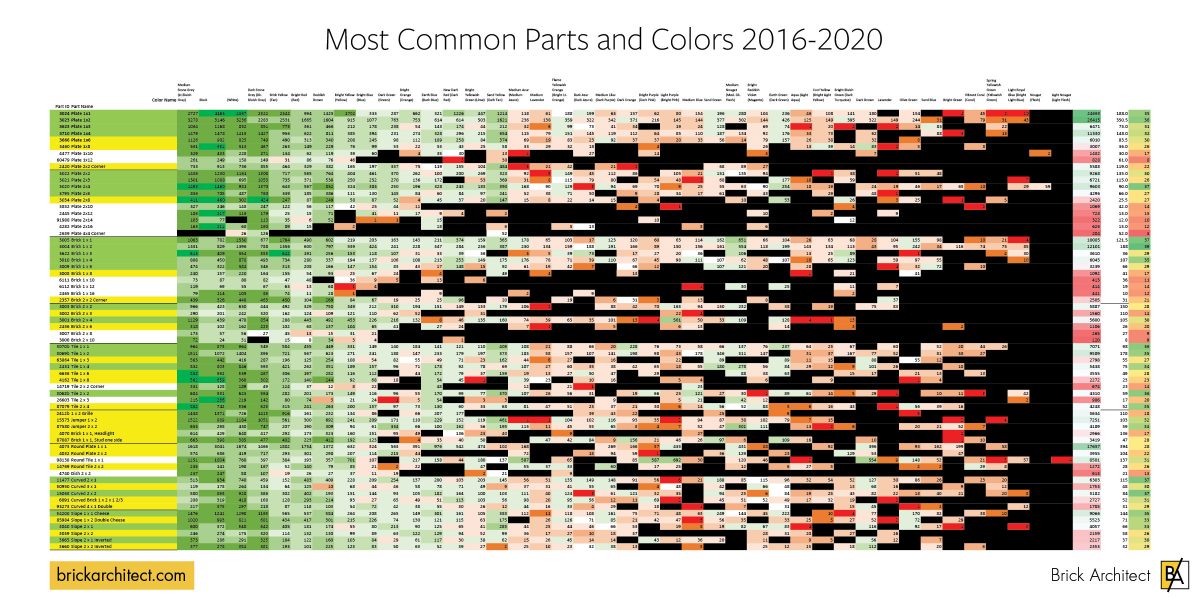 While the cost analysis in the previous chart is more useful for deciding which parts to order from LUGBULK, this chart is useful for understanding which colors are fundamentally more or less common within real LEGO Sets.

This slice of the data does highlight a few interesting observations:

As mentioned earlier, unless you need very specific parts in large quantities for a particular MOC, your best bet is to build up a library of parts you frequently use in those colors that you like building with. Rather than thinking of LUGBULK as your only source of parts, you should treat it as a strategic opportunity to save money as part of a broader part acquisition strategy.

In my case, I’ve identified about 30 of the most common LEGO parts which I like to have on hand, and identified which colors I want to focus my attention on. Every year, I review my list of common parts to see if I should make any changes. I also review the LEGO Color Palette to see if there is an up-and-coming color that I like which is finally available across a wide enough range of common parts.

This approach helped me focus on just three colors for the last two years: 154Dark Red, 38Dark Orange, and 151Sand Green. All three are colors which I like building with, are finally avaialable in a pretty wide selection of parts, and are relatively costly to purchase on BrickLink.

Another perfectly reasonable alternate approach would be to focus on a few specific parts, and use LUGBULK to get that part in all of the rare or costly colors. (This is a particularly good strategy for mosaic builders who only need 1×1 Plates and Tiles across a wide range of colors to build amazing 2-dimensional art.)

Lastly, it’s worth calling out that you should discuss these strategies with the rest of the people in your LUG. If the group can decide on a shared strategy for making the most of LUGBULK each year, you might be able to get more of the parts you need!

I hope this article has given you some ideas around how to make better use of the LUGBULK program, and some useful data to inform your decisions! If you have additional ideas, please share them by leaving a comment below!