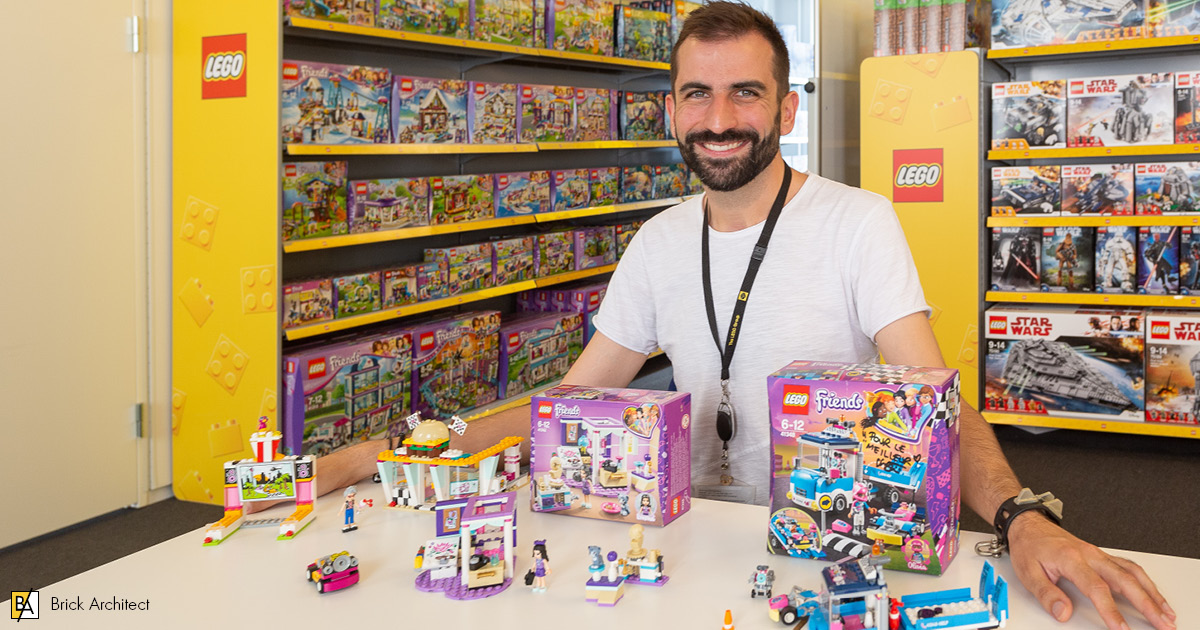 Brick Architect: Can you tell me a little more about yourself?

David Tauzia: My name is David. I’m from France, and I’ve been working at LEGO for two years now. Before I came to LEGO, I was working in the video game industry as a digital artist, modeling characters, scenery – basically spending my time on the computer creating 3D assets.

Brick Architect: Heartlake City is at the center of the LEGO Friends sets and stories. Is it a real place in a specific city? Does it have a larger story that you are slowly telling through the sets, or are you making it up as you go?

David Tauzia: Very good question. it is mostly an imaginary city but lively we are thinking about the details of Heartlake City (HLC). In our office, we have a giant map of the city, everything is taking place around this lake that has this heart shape, then you have the downtown and some suburbs around. It is super nice that we can say a set takes place in this district because it fits another architecture. We are targeting girls, and girls are a lot into details. They want to know where the story of this particular building and who lives here.

Brick Architect: I’m imagining an idea board with real world architecture for inspiration?

Brick Architect: So the process of creating this map happened a little after the initial products?

David Tauzia: The Friends universe needs to feel coherent, so it happened at the beginning. We can explore new areas expand the story without repeating ourselves because of this helicopter view of the city.

Brick Architect: One thing I noticed is that most of the girls seem to live in suburban homes. I wonder if this makes it less approachable for kids that live in an apartment, or on a farm.

David Tauzia: The only thing I can tell you is that we are really trying to find a lot of different locations, so it is not taking place only in the suburbs. Stay tuned 😊

Role of Architecture in LEGO Friends

Brick Architect: How do you incorporate architecture and architectural styles into the sets? For example, #41311 Heartlake Pizzeria which has a simple façade which creates the feel of an Italian bistro.

David Tauzia: The building needs to be iconic, appealing with nice shapes and colors. This kind of Façade build allows us to have a quick access to the big space behind for a lot of interior play. As I said we have a real map in our design area and we are pinning every product on it. We decided to put the Heartlake Pizzeria in the Latin corner of HLC in this case. We are working hard to gather some reference architecture and working with concept designers who are very good exploring ideas to finding the iconic bits. Then it’s our job as model builders to make it happen.

Brick Architect: I feel like the products have become more detailed as the product has matured. For example, #41336 Emma’s Art Café has an art deco style that is more evocative of real architecture than earlier sets.

David Tauzia: It is also because the LEGO Friends universe becomes bigger and coherent with the time. We also have a new TV Show portraying HLC architecture influenced by a mix between Paris and San Francisco even if it stays an imaginary world. Even though a LEGO product is a toy, it needs to have some details and icons you can relate to.

Brick Architect: Most LEGO Friends sets are very bright (what many would say is ‘girly’), but at the same time something like the #41340 Friendship House has a much quieter color palette. What is the role of color in LEGO Friends?

David Tauzia: Color is very important for girls It defines the Minidolls personalities. Emma is more into the Purple quiet tones, Andrea is more into Bright Yellow as she is more dynamic. The Friendship House is an abandoned house, something that the girls are taking over and remodeling it. at the beginning of the story. It needs to be a secret cozy hub to gather your close Friends, That’s why it’s not something that happens in the middle of the city

Brick Architect: We have these fantastic sets for young girls, with increasingly complicated building techniques and good part usage, but it ends with larger sets like Friendship House. Boys can start with City and grow into the Creator Expert or Marvel; why don’t you have something similar for girls?

David Tauzia: I can’t tell you anything about this, but you would be surprised. We are trying to expand the line and you will get something more advanced over time.

Brick Architect: Can you tell us more about the role of the Minidoll? Do you design sets differently for the Minidoll than the classic Minifigure?

David Tauzia: For me it is the same, obviously we don’t have the same shape of body, but it still works with the same LEGO system. I got hired at LEGO because I really love the Minidoll element; you can do a crazy cool stuff with them. This design didn’t come up in a snap. It was a long process to find the perfect shape for the body, and everything was designed to be appealing for girls. LEGO Minifig and Minidoll (from article on Scale in LEGO Models.)

Brick Architect: Do you work on LEGO Elves as well?

David Tauzia: No, only on Friends. But we don’t sit far away in open space, so we are talking a lot together.

Brick Architect: How did the Friends Set Competition get started? Did that come out of the Friends team? David Tauzia: Yeah, it was something to connect with the fans. We received so many entries that we had to sort; it was crazy. Sienna, the girl who won the contest came to the office with her family. It was so cool to see her teaming up with a designer to create her own LEGO Friends set. It was an amazing adventure for all of us.

Brick Architect: As girls who grew up with Friends get older we will start to see more adult fans of LEGO who love Friends. Are you starting to see more enthusiasm from the fan community?

David Tauzia: I can’t tell you what we are doing right now, but there is something that involving fans even more.

Brick Architect: Do you have a favorite part or creative parts usage that you can speak to?

David Tauzia: As a general thing, I would say everything that helps me build sideways. It extends the possibilities. You aren’t only stacking elements on top of each other but also create super nice appealing shapes and silhouettes. This is very important.

A simple example we can add detail by just putting a jumper plate on the side of a brick to create drawers. Depending on the set we are doing more advanced techniques, but it is tested according to our audience, so we can’t go too crazy.

Brick Architect: Do you personally have a color that you really enjoy working with the most?

David Tauzia: These days I really like to build with our Teal color. As a more classic color, I like the orange because it is also my favorite color.

Brick Architect: Do you ever get to add secrets to your models?

David Tauzia: It depends on the designer, but yes. As an example, I like to hide a classic red brick into something for you to discover, and it is a personal thing. A kind of signature. You can also say sometimes we can have fun with the stickers. We can hide some secrets there…

Brick Architect: Everyone at LEGO seems to have friends which work on different teams… Does that affect how does collaboration work within the company?

David Tauzia: You are assigned to a project, but we are not sitting far away from other teams. We are sharing a lot. It’s important to collaborate with close designers, but also about walk and look around the building to see what’s cooking. Also, if this guy working in Creator is good with functions, why don’t you go to ask him for some help. 😊

We have a sharing lab where you can bring the model you are working on as well. We are trying to connect everybody in the company.

Brick Architect: How does the sharing lab work?

David Tauzia: BA: How does the sharing lab work?
It’s about once every two weeks. We are gathering designers around a giant table and everyone is bringing something they are working on right now, and it could be something very early or almost final, but if you have some doubt about something or want to test something you have the chance.

You can come even if you don’t have anything to show. You can check out and try out something and get inspired.

Brick Architect: How many people come?

David Tauzia: It depends, I would say 20 designers on average.

Brick Architect: I understand LEGO has adopted some agile design methodologies, is there an example of how being more agile has affected your team?

David Tauzia: Yes, It’s something across the company. We are trying to be more agile. For example, I work on Friends, but for a few days, I can be asked to work on LEGO Movie 2. I will get a brief and build something different. You can take a break and go crazy on something refreshing. It is super fun and inspiring.

Brick Architect: How often do you get to do this?

David Tauzia: It depends of the need and if you are busy, because obviously you need prioritize your model first and you have some deadlines to respect.

Brick Architect: When our colleague or friend releases a set, do they know in advance if it will do awesome? Can you just tell when a set is really great?

David Tauzia: I think you have an idea or a feeling if it will be good or not but it’s also nice to rely on on trends reports and forecasts. Of course, you can’t be sure of anything, but we are giving our best everyday to create an awesome product that will be appealing to all the girls 😊

Brick Architect: When a set does really awesome, do they get data on how it is doing?

David Tauzia: Everything is monitored, so every week we receive a report from the marketing department. He is telling us if it is selling more in the UK market, or the US for example. He is giving you a lot of tracking information, so it’s not like we are releasing something and closing our eyes.

To work at LEGO is also to have an awesome life quality. People are friendly and we are hanging out a lot after work, and of course, if your product is doing great, you celebrate!

I hope you enjoyed this in-depth look at the LEGO Friends theme. What surprised you most? Tell us by leaving a comment below!