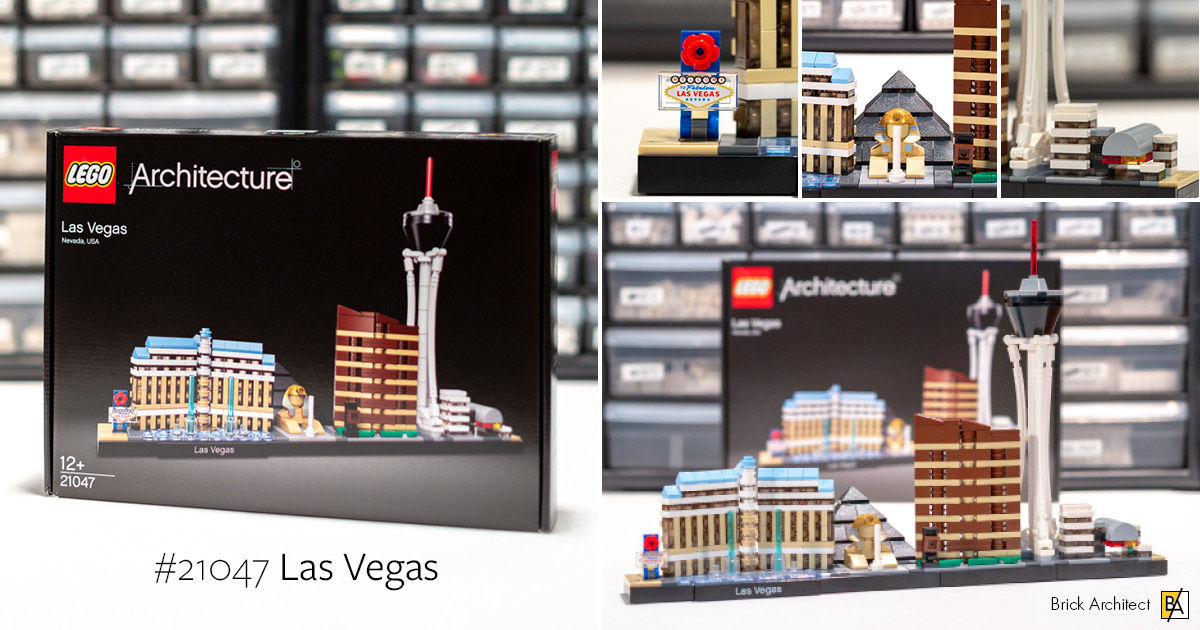 The model features a nice selection of prominent Las Vegas landmarks, most of which are located on the Las Vegas strip. The Strip is a 4.2 mile stretch of road that’s technically south of Las Vegas city limits, ending at the “Welcome to Fabulous Las Vegas” sign which was erected in 1959.

Since the model is built from right to left, we will highlight the buildings in the same order. We will start with the base, which is similar to other models in the skyline series. As noted earlier, the base of this set is four studs wider than the 32-stud width used in almost all of the sets released so far. It also exceeds the normal 4-stud depth in two places, for the Pyramid at the Luxor, and the rear section of the Bellagio.

We do see a preview of some interesting techniques, including the use of clips to attach the Stratosphere and Bellagio models to the base. (This approach was also used to attach buildings in the recent #21039 Shanghai Skyline set.)

Five blocks in historic Las Vegas were revamped in 1995 as an entertainment space and pedestrian mall which is partially covered by a barrel-vault canopy. This helped preserve some of the classic hotels and casinos including the Golden Nugget, as most of the new development moved to the strip. While I have never actually visited the Fremont Street Experience, the iconic Barrel-vault canopy is clearly present in the model, and the 50’s neon lights are re-created using alternating transparent red and transparent yellow plates.

Nearing the northernmost end of the strip, it is hard to miss the Stratosphere’s iconic (very) late Modernist tower, built in 1996. It is seriously tall; at 1,149 ft (350.2 m) it is the tallest freestanding observation tower in the United States (Wikipedia). The LEGO model accurately captures the inverted cone on the top, and the three curved legs which closely resemble the design of Seattle’s Space Needle. Sadly, the roller coaster on the top of the tower is not included in the model. The Hotel and Casino are located below the tower, and are not featured in the LEGO model.

The Wynn is one of the growing selection of ‘Luxury Resort and Casino’ options in Las Vegas. It was developed by wealthy casino developer Steve Wynn, who stepped down as CEO of Wynn Resorts under accusations of sexual misconduct. This apparently wasn’t reason enough to remove Wynn from the LEGO model at the same time they replaced Mandalay Bay with the Bellagio. The LEGO model effectively captures the gently curved shape of the hotel and it’s color scheme. It is neat to see this type of curved construction in an official set, but I will say that this was the most repetitive section to build in the whole model. It’s also worth noting that a second “Encore” building with the same shape was built a few years later adjacent to the Wynn.

Luxor is a massive hotel shaped like a pyramid, which was completed in 1993. This is an extreme example of re-purposing historic architectural styles, which became widespread in the Postmodern architectural period. In front of the Pyramid, we also have a re-creation of the Great Sphinx of Giza. Both the Pyramid and Sphinx have been re-created in the LEGO model. The pyramid is truncated on the back to save space, but looks good from the front, and the Sphinx is accurately rendered using just a few parts and a Minifig accessory headdress. It is set back from the rest of the model, which is just as well as it is one of the least inspired models in the set.

This model effectively captures the shape and personality of the beautiful Bellagio Hotel, and the iconic fountains in front which are choreographed to music. Watching the fountains is one of my must-see stops every time I visit the Las Vegas strip. (The area in front of the fountains is packed day-and-night for the performances which occur every 15 to 30 minutes.) Eagle-eyed reader may notice that most of the building is built using SNOT techniques, which is an advanced building technique which I appreciate. Unfortunately, in this case the final design wasn’t as elegant as I would have liked. The panels are cleverly attached to the base using Bar 6L w/ Stop Ring (part 63965). Unfortunately, the clips and bars are clearly visible when looking at the model from the side or back. This feels less polished than I would prefer for an official set.

Further, It is clear that in their haste to replace Mandalay Bay with a different building, they were not willing to re-arrange the rest of the buildings to match the order in which they appear when driving down the strip. I admit that this is a minor detail since skyline sets are caricatures of real cities, but it’s too bad given that it would have been easy to fix.

Lastly, we have the iconic “Welcome to Fabulous Las Vegas” sign. While the 1969 sign is well represented in movies and TV shows, I’ve never actually seen it since it’s about a mile further south from the well-visited areas of the Las Vegas strip. Nonetheless, the hinge, flower and transparent printed tile effectively capture the spirit of the iconic sign.

There are no brand new parts in this set. That said, there are a few parts appearing in new colors, a nice selection of relatively new parts, and a few printed parts. Complete parts list on the back page of the instructions.

I completely support the decision LEGO made to replace Mandalay Bay with the Bellagio in the aftermath of the 2017 Las Vegas Shooting. This helps them distance themselves from the tragedy that took place there, and the politically charged topic around gun rights in the United States. It also quite frankly gave them an opportunity to revisit the model and select a more iconic landmark of the Las Vegas strip. I couldn’t be happier with their decision to include the Bellagio, and it’s beautifully choreographed fountains in the set. (The Bellagio was one of my top pics to replace Mandalay Bay in my February article about the redesign.) I’m not fond of the exposed clips and bars on the back of the Bellagio model.

Overall, this is a worthy addition to the LEGO Architecture Skyline series. I was pleased by some of the new building techniques including the subtle curve on the Wynn, and the elegant curved legs on the Stratosphere. There are also some things I don’t like, including the building techniques used to create the Bellagio, and the fact that the buildings appear out of order. I continue to be disappointed by inaccurate colors in printed instructions when compared to real LEGO bricks. I do understand that some bright colors are challenging to re-create on screen due to gamut issues in common sRGB monitors, and in print due to limitations of CMYK printing (which I hope to cover in a future article). That said, they continue to fail with very easy to reproduce colors like 5Brick YellowTan which appears far too dark in the instruction manual. I have had similar issues with 194Medium Stone GreyLight Bluish Gray, 199Dark Stone GreyDark Bluish Gray and 26Black

What do you think of the new set? If you do decide to buy it, please consider using our referral link to buy it at amazon.com—it helps!

The LEGO Group provided this set for the purposes of this review. The opinions in this article are strictly my own—providing sets for review does not guarantee a positive review. Photos in this article are by Tom Alphin unless otherwise noted. Visit the About page for more info about our journalistic standards and affiliate programs.