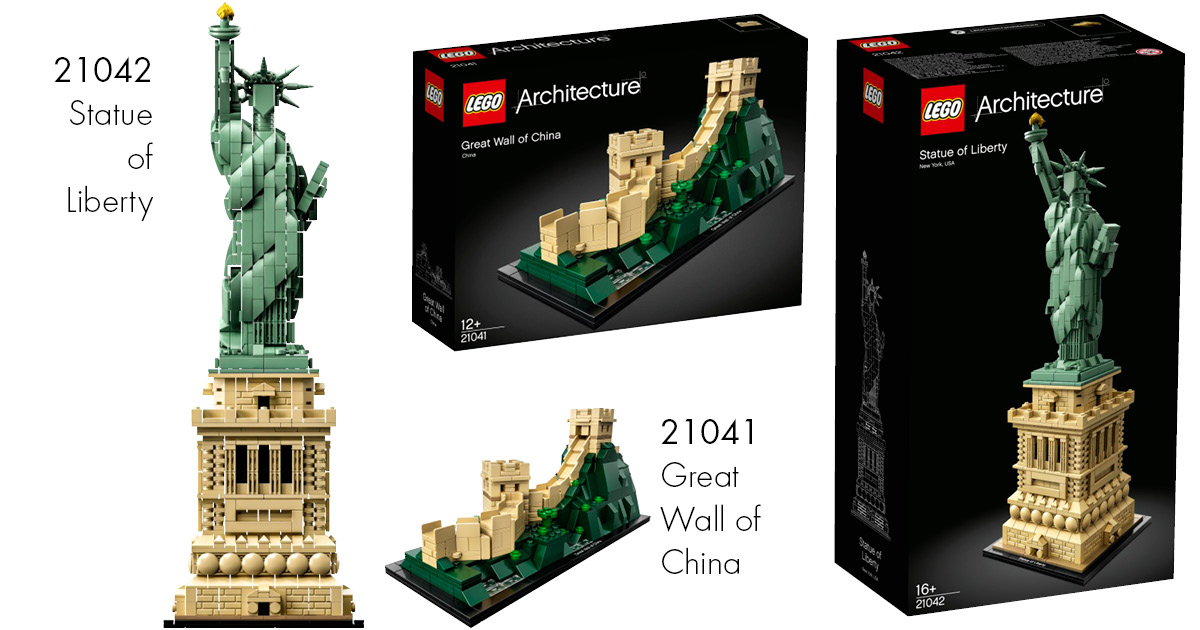 I am excited that the Summer 2018 LEGO Architecture sets are almost here, and they are interesting additions to the Architecture series that bring the product line in new directions. #21041 Great Wall of China explores the well-known global landmark. #21042 Statue of Liberty allows us to re-create the statue which is intrinsically linked to both New York City, and emblematic of the freedom which immigrants sought when fleeing to the United States in a previous generation. Both sets will be available worldwide on June 1.

Built in 1886 as a gift from the people of France, The Statue of Liberty has been welcoming Immigrants and Guests to the United States for a very long time. It is strategically located off the southern tip of Manhattan, the most densely populated and historically significant Borough of New York City. The tower was designed by French sculptor Frédéric Auguste Bartholdi and built by Gustave Eiffel (yes, that Eiffel… the one who designed the Eiffel Tower in Paris a few years later.)

The base is a substantial piece of Architecture designed in the Neoclassical tradition. Whether the Statue itself qualifies as Architecture or Art is a bit of a semantic argument and irrelevant to the fact that this is a beautiful LEGO model based on a beautiful piece of Colossal sculpture.

This is not the first time the Statue of Liberty has been re-created as a LEGO set. The first attempt was the massive set #3450, from the “Advanced models” series which included 2882 pieces and was released in 2000. (The vast majority of the parts were basic bricks in Sand Green.) We also saw #40026, a tiny set which was exclusive to the Rockefeller Center store, and “Lady Liberty” in the Series 6 of the Collectible Minfigures line. I do think you get a lot out of all those extra pieces. The base of the tower is intricately detailed with the same rusticated brick corners, four striped columns, and shield details as the real building. The proportions are pretty realistic, and Tan / Sand Yellow is a realistic choice for this part of the model. The statue itself is artfully created using a huge number of Sand Green tiles and bows to re-create the flowing folds of Lady Liberty’s dress. While I haven’t done the analysis yet, I’m certain this includes a number of pieces appearing for the first time in this rare and popular color.

Between the artistic rendition of the statue and the faithful re-creation of the architectural details on the base, there is a lot to love about this model. Even better, it is available for an excellent price of 119.99$ for a whopping 1685 pieces. Unless there are surprises coming for holiday, I think this will be the highlight of the 2018 LEGO Architecture collection

While the Great Wall of China was built over the course of 2,000 years, most of the iconic sections which have been preserved date back to only the Ming Dynasty (1368–1644). While the wall is a globally recognized UNESCO World Heritage Site for it’s historical importance, it feels like an odd match for the Architecture series as it is fundamentally just a wall with relatively little architectural detailing. We do see two guard towers, which are an accurate match for what I saw when visiting the wall in 2011. The two small openings on each side are a fair approximation for the archways used as doorways in the real structure. We also see an effective artistic rendition of the rough mountainous landscape that the wall crosses. Based on an initial assessment of the set, it looks like a nice selection of dark green parts for your own landscaping, as well as a variety of parts in the very useful Tan / Sand Yellow color. At 49.99$ for 551 relatively small pieces, it is fairly priced, but hardly a good deal.