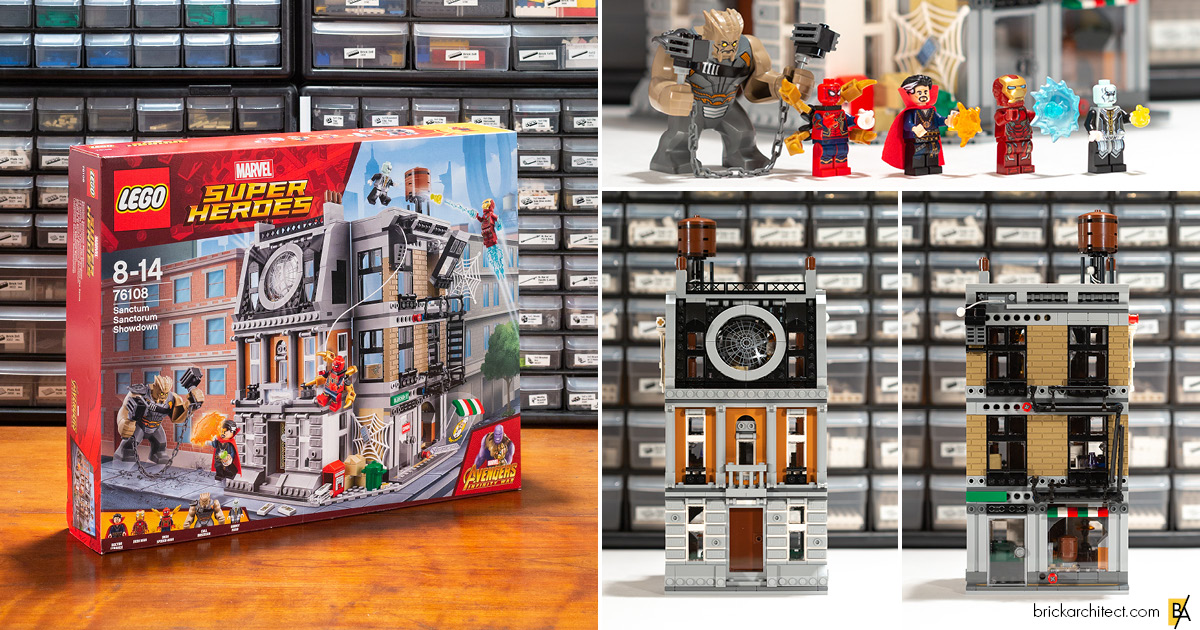 Brick Architect takes a focused look at the architectural features and parts selection in this iconic new set from the Marvel Super Heroes theme. Let’s see how it stacks up to sets in the Creator Expert Modular Building series.

At first glance, this set’s high level of architectural detailing looks like it belongs in the Modular Buildings series. At 99.99$ for 1004 pieces, it is a good deal smaller and less expensive than the modular buildings. (The smallest currently available set in the series is #10246 Detective’s Office at 159.99$ for 2262 pieces.) Let’s see if it lives up to my expectations as an introduction to that style of building.

The construction process uses 8 numbered bags, so you will only have a few parts on the table at any given time. This felt like too many bags given the modest size of the model, but I suspect this was intentional to keep each bag to around 20 minutes of construction time, and to reduce frustration searching for the part you need. For younger builders, it might make sense to only assemble one bag each day. The construction process alternates between the two buildings which are attached with hinge bricks, with each floor roughly corresponds to a single bag. Stickers are used extensively to add details, mostly to the interior. The only sticker that is architectural in nature is the printed pattern on the front door of the Sanctum building— I would have preferred this one to be a printed part like the round window of the Sanctum.

Of the two buildings, the Sanctum side of the model is the strongest by far. The three stories reflect three different styles of architectural detailing. The bottom floor has a rusticated stone façade and sloping concrete base suggesting a strong foundation. The second story has a nice contrast between the stone columns and orange stucco. the top floor has a Second Empire style roof, with rectangular windows on either side of an oversized oculus-style window.

While the large round window is creative license on behalf of Marvel, the use of three distinct styles representing the bottom floor, middle floors, and very top floor is quite common in urban residential architecture in Europe and North America. Highly decorated urban residences drew inspiration from rural palaces, at the same period in history when affluent people chose to move to the cities. The front features the beautifully detailed Sanctum Sanctorum, and the back features a realistically gritty urban apartment building.

Peter Parker’s apartment building is realistic to urban apartment buildings such as those in New York City, with first floor retail, exposed fire escapes, and a rooftop Water Tower. While realistic, it lacks the architectural interest of the Sanctum building. The two buildings do work together well to create the illusion of a whole city, and a great playset.

In addition to thoughtful architectural detailing on the exterior, there is an impressive amount of detailing on the interior including furniture, wall decorations, bookshelves, and weapons. The model includes a detailed interior, and play features like this breakaway wall.

I was also impressed to see how many interactive play-features are included in the model, including several areas where you can blow up a wall, and the ability to raise/lower spiderman on a web which attaches to the water barrel on the roof of the apartment building.

There is a nice selection of relatively new parts, existing parts in new colors, and one excellent unique custom printed part in this set. The set includes a nice selection of relatively new parts, and existing parts in new colors.

The set also includes the clear printed part with the sanctum pattern. We also get a nice selection of “Power Burst” parts in Trans-Light Blue, Trans-Orange, and Trans-yellow.

All of the Minifigs are unique to this set, even though they are not the focus of this review.

This section contains minor spoilers, so please continue with caution if you haven’t seen the movie yet…

Only a few minutes of the film take place inside the Sanctum, and the play features don’t match the action very closely. The building exterior is clearly simplified from the real building, but the presence of the iconic round window and brick façade make it immediately recognizable.

By contrast, I don’t think we ever see Peter Parker’s apartment in the movie, so it’s difficult to assess the faithfulness of the second building to the cinematic world. It does align reasonably with my memory of previous films, and the fire escape and first floor pizza shop are very realistic for New York City apartments.

The film itself felt like the All Star Game—you get to see all your favorite characters, even if the game isn’t very good. Not only does it include a huge range of characters, but the relatively thin plotline takes us to far too many places in the growing Marvel cinematic universe. Thankfully, it is fun to watch with lots of action despite it’s limitations.

If you review the current selection of LEGO sets, there is a huge gap between the relatively simple buildings featured in the “Creator” series (typically around 30$, aimed at ages 8-12), and the massive sets in the “Creator Expert” series (well over 100$ and targeting ages 16+). The basic “Creator” sets feature relatively little architectural detailing, whereas the Creator Expert sets are extremely intricately detailed. There aren’t a lot of sets in the middle, introducing more advanced building techniques at a reasonable price point, until this set.

To be fair, there are a lot of awesome sets aimed at this transitional skill level and age group within the Star Wars and Super Heroes series, but they are usually ships or large playsets instead of buildings. For this reason, I think it is fair to consider this set unique in offering an architecturally focused minifigure scale model which sits somewhere between the simplicity of the “creator” series and the complexity of the “creator expert” products.

To set realistic expectations, this model has a more compressed scale than those in the Modular Building series: with a base of just 16×16 studs and very small rooms and short ceilings on each floor. That said, there are numerous examples online where people have modified the official set to fit in their Modular city — it doesn’t look like major changes are required to make it look good.

This set met my high expectations. It manages to include excellent architectural detailing packed into a pretty small model. It is significantly compressed compared to the original buildings, but preserves the building’s character effectively. I would happily recommend this set to anyone who appreciates the Marvel theme and wants to try something a little easier than sets in the Creator Expert series.

At 99.99$ this is a good value for a licensed theme, especially if you collect Minifigures. (You might also decide to sell the minifigures—the five figures in the set are currently selling for a total of about 40$ on BrickLink.)

The LEGO Group provided this set for the purposes of this review. The opinions in this article are strictly my own—providing sets for review does not guarantee a positive review. Photos by Tom Alphin unless otherwise noted. Visit the About page for more info about our journalistic standards and affiliate programs.