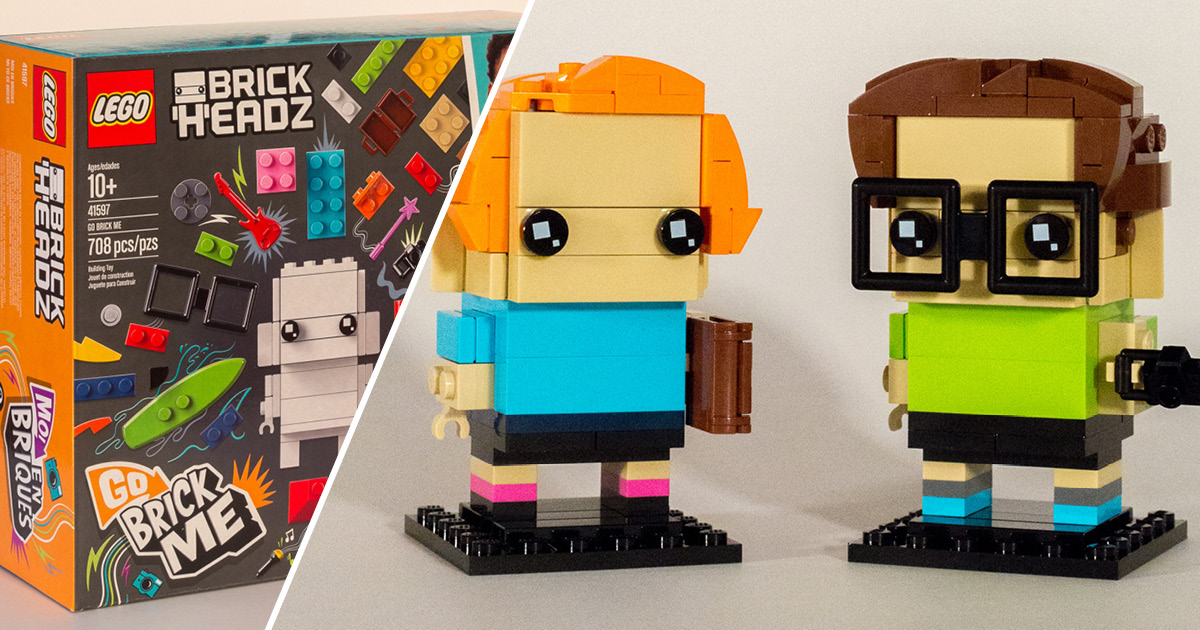 The latest addition to the BrickHeadz theme gives you a chance to create your own BrickHeadz figures. It also includes a lot of useful parts in useful colors, making it a great parts pack. Let’s decide if you need one for your collection!

November 7, 2018: Brick Architect now includes numeric ratings. The original review did not have a rating, a few sentences were changed to add a rating for this set. This article is actually two reviews in one:

Ok, let’s get this out of the way — this site focuses on LEGO Architecture and LEGO Storage solutions and I’m about to review a completely unrelated LEGO set. The reason I wanted to explore this set because it’s really inexpensive, and it includes a ton of useful parts in relatively uncommon colors. While we’re at it, let’s see if it’s any fun.

#41597 – Go Brick Me is an open-ended kit which encourages LEGO fans to build brick-built LEGO figures of themselves or people they know. While the typical BrickHeadz set requires only around 100 parts, this set includes a staggering 708 pieces to help you build two figures. All these extra parts are needed to offer a wide range of diversity in hair colors, skin tones, and clothing options.

A brief look at other open-ended LEGO sets

Historically, LEGO sets have called fallen into one of two categories: they are either very prescriptive with the exact parts to build one model by following the instructions, or completely open-ended sets which include a lot of general purpose parts and no instructions.

In the 80’s and 90’s, most sets included photos of “alternate models” you could build with the same parts, but this is not common anymore. Thankfully, many of the sets in the “creator” series are what they call “3 in 1” sets, as they include the right parts to build three different models using three different instruction booklets. This offers a taste of what’s possible, and a great value for families who only have a few sets.

Thankfully, there have been a few sets that break this mold further, by offering a versatile set of parts with a booklet that includes a mix of instructions and inspirational ideas. The two best examples of this approach are the popular LEGO Mindstorms robotics kit, and the LEGO Architecture Studio set that inspired me to write my The LEGO Architect book. Both offer a diverse set of parts and limited instructions and ideas to get you started. #21050 – LEGO Architecture Studio is an open-ended set that lets you create your own LEGO architecture.

While I am sad to report that the LEGO Architecture Studio set was recently discontinued (which will be a topic for a future article), I am happy to see that the #41597 – Go Brick Me set aims to offer a nice blend of instructions and diverse parts for creative building.

Before we take a deeper look at the part selection, I wanted to give a brief review of the set. I recruited my wife (a competent but reluctant LEGO builder) to build one of the models. We both have the same light skin color, so this allowed me to test the feasibility in building two complete models using just the parts included in the box. Each of four hair colors come in a separate bag containing 90 pieces.

My first impression after opening the box is that there are a lot of parts in some great colors here. There are separate bags for all four hair colors: Black, Reddish Brown, Orange, and Yellow. As BrickHeadz are caricatures, this covers the most common natural hair colors, with the obvious exceptions of Gray and White. My wife used Orange since she has red hair, and I chose reddish brown (which is too dark, but probably the closest match given the existing LEGO Color Palette.) Three skin tones are provided to allow a diverse set of faces.

I don’t understand why they didn’t include 283—Light Nougat (Light Flesh), and 18—Nougat (Flesh) instead of 5—Brick Yellow (Tan), but those colors are extremely rare and maybe they were struggling to keep the set under 30$.

Two additional bags include white bricks to create a ghost BrickHeadz figure, as well as a variety of parts and colors to use to make shirts, pants, shoes, and the pedestals that the figures stand on. We haven’t made completely custom figures yet… Instead, we picked the pattern we liked for the torso from the six options which are included in the instruction booklet. we did customize the colors for the torso and pants to match our favorite colors from the limited selection provided.

We did the same for the heads, although there are a lot more choices in the book, 13 in total. Each set of instructions is based on a random hair and skin color, and it is made clear that you can swap either color based on the person you are trying to re-created. There’s an even wider selection of hairstyles.

All said, I think that my wife had more fun than she was willing to admit. That’s a good sign, as I suspect this will be a popular gift item for a wide range of ages. I think it is especially targeted at young adults who might have drifted away from the LEGO hobby—maybe a fun kit like this is enough to entice them to pick up one of the many sets aimed at adults like Architecture, Creator Expert, or Star Wars Ultimate Collectors series.

I enjoyed it too, and look forward to customizing my figure in the future. Maybe I can use a mix of Reddish Brown and Medium Dark Flesh to more accurately capture my hair color, and a darker shade of green that I wear more often. The great thing is that it’s just LEGO—No instructions are required for people to want to customize their figure further using parts from their own collection.

We did run out of 1×2 plates in Tan, but nothing else. We both chose to include tan as one of the colors on the legs, which accounted for the four pieces I borrowed from my existing collection. Unfortunately, families often share hair and skin colors, which will make the chance of running out of parts something of an issue when building two figures using a single set. our first two Customized BrickHeadz figures based on the instructions in the booklet.

I recommend #41597 – Go Brick Me without reservations for almost anyone, whether they are a LEGO enthusiast or not. Even novices will be able to create a reasonable model of themselves by using the instructions. The fact that is just $29.99 for 708 pieces makes it even better.

I had originally planned to only review the parts, but the set was too enticing so I reviewed it too. Let’s start with the obvious, this is a great value at $29.99 for 708 pieces.

The only completely new parts in this set are the square and round glasses. Matching the latest in hipster style, all you need are the frames for the perfect look. They aren’t designed to allow you to insert clear plastic lenses. Glasses – Two completely new parts which debuted in this set.

Both pairs of glasses only come in Black. They have the following part numbers:

I have identified 7 parts which have been released for the first time in a new color for this set.

These seven pieces are new colors for existing parts.

The most notable part is 2×2 wedge, which comes in three new colors:

Other new part/color combinations are: The same 13 unique parts are included in all three of these colors. These are very useful small parts for creating your own MOC’s in almost any theme, including Architecture. In total, that’s 42 pieces in each color.

We also get a ton of parts in four colors allowing a range of hair colors.

A bunch of White parts

The kit also includes instructions to build an all-white BrickHeadz figure. I think this is meant to get people started with an even easier figure, but it feels completely unnecessary to me. Not to worry, that’s 45 additional white pieces to add to my Architecture Studio set.

Some other colors, too…

A small selection of other colors is included to customize the torso, hands and legs. The options are pretty bright, so you might want to go into your personal stash customize your clothing.

This is an excellent set, and a great value compared to many other LEGO sets. Whether you want a bunch of cheap parts to add to your collection, or you want a fun building experience, you can’t go wrong. That’s why it earned our top “Must have” (5/5 star) rating! Not bad for my first try. I don’t wear glasses often, but I do want to add a beard next.

If you decide to purchase #41597 – Go Brick Me after reading this review, please consider buying it through my Amazon.com or LEGO.com referral links. It helps.