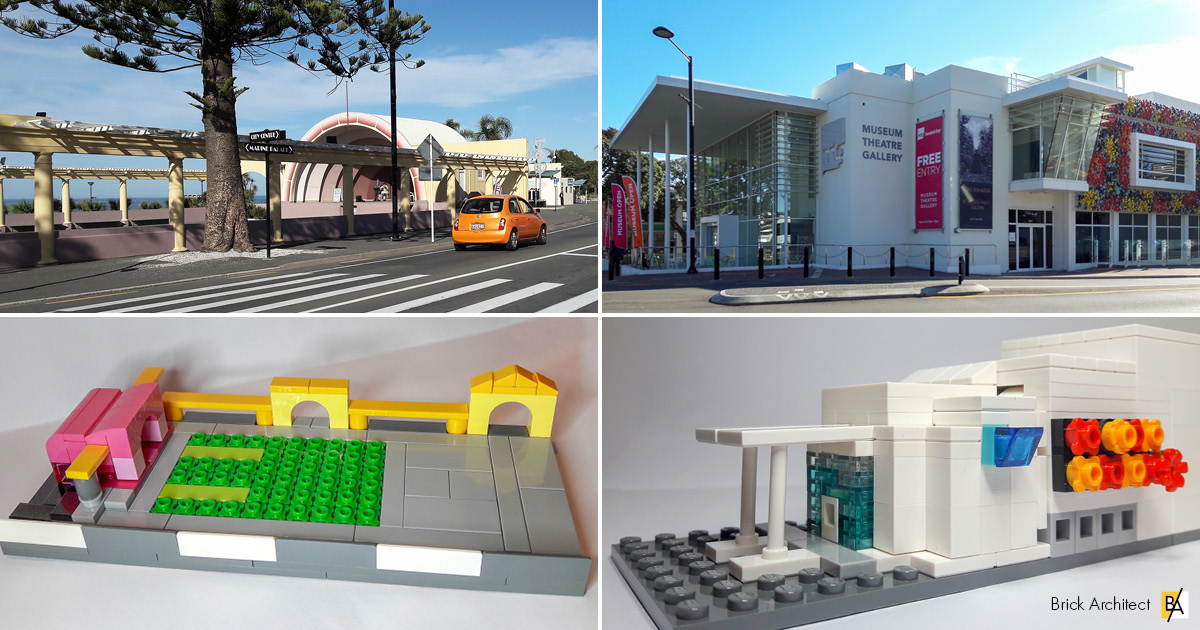 I recently visited one of the only Art Deco cities in the world—Napier, New Zealand is a hidden architectural gem worth visiting! Let’s learn how that trip inspired me to explore the architectural style using LEGO.

When an earthquake struck Napier in 1931, it killed 258 people and destroyed the city. The city had a lot of high parapets and canopies which were seen as a contributor to the many deaths. With the world in the midst of the Great Depression, there was little new construction going on. Napier was rebuilt in the style of the day, now known as Art Deco. The whole city was rebuilt, which is why almost every building is in the Art Deco style, making it one of the most complete Art Deco cities in the world.

It is a coastal city on the east coast of New Zealand’s North Island. Marine Parade is the seafront road which divides the city from the coast. Between Marine Parade and the coast is a linear public space. One of the features of this public space is the Sound Shell (1935), an open air public performance venue. The Sound Shell and its colonnaded surround was designed by John T Watson inspired by Hollywood. Opposite the Sound Shell is the Masonic Hotel (1932) and the T & G building (1935/1936). The T & G building was designed by Atkin & Mitchell and completed in 1935/1936. It is a three storey office building with a plaster finish. It is in the Stripped Classical style, which emerged as a transition from the classical detailing of earlier styles to the style that became Art Deco. On top there is a circular additional level with a dome. Originally copper, this has oxidized to a green color. The Masonic Hotel was designed by Norman Wilson/Prouse & Wilson and completed in 1932. It is built in the Art Deco style. It is a two story reinforced concrete structure with a hipped roof. Its most famous guest was Queen Elizabeth II on her 1953/54 Royal Tour.

I took initial inspiration from the Art Deco chapter in The LEGO Architect, and then built four key buildings I noticed during my visit. Tom’s book, The LEGO Architect includes Art Deco as one of the featured architectural styles. He provides instructions for a movie theatre with prominent vertical marquee. The book also features a range of other LEGO models in the Art Deco style from skyscrapers to hotels and diners. As a warm-up, I built the movie theater from Tom’s book with a little splash of color. I also wanted to build a homage to the Napier cityscape by including several buildings I enjoyed. What follows are a series of experiments in creating various buildings using LEGO. Finding a consistent scale proved to be a challenge, so each model is at a different scale. The LEGO Architect is a bestselling book that teaches seven styles of Architecture using LEGO. It’s available in 10 different languages.
Learn more at brickarchitect.com/book, or buy it now at your local booksellers or amazon.com.

The Sound Shell has an amazing shape which provides natural amplification, plus a lovely pink shading to visually amplify its function.

In LEGO, this appearance is probably best achieved with three arches in different shades of pink, with each arch a plate higher than the one before. I had arches in several different pinks, but these were not a consistent size. The first thing I tried was to use three white arches, finished with pastel purple curve on top. When I tried it again, I used three pink arches of the same shade but with some different pinks incorporated in to the supports. I set this version in a simple replica of the audience area and surrounding colonnade.

The T&G building is in the Stripped Classical style, so used fewer bricks for ornamentation and tried to use color instead. This drove the scale of the building, as I needed more space to use layers of plates to achieve the detail above the main entrance and the detailing along the top of the building. Tom Alphin: I had never heard of the “Stripped Classical” architectural style until Christine mentioned it. That’s because I had always heard about simplified classical forms in a different context… In the early 20th century, a simplified version of classical architecture became the signature style under Hitler, Stalin, and other Fascist regimes, hence the term “Fascist Architecture.”

Because there are numerous examples of Stripped Classical buildings in the United States and throughout the world, it is helpful to have a broader term for this architectural movement that can be seen as a precursor to postmodernism.

The Masonic Hotel is a large building with an E shaped footprint. The ends of the three wings face the seafront. This elevation takes up the whole block but I wanted to make it a bit more manageable so reduced the width by simplifying the building down to its basic form.

The Masonic Hotel has changed color scheme over its life span so I wasn’t too concerned with the color but in the end I did take many cues from the current color scheme. In particular I did take the green framing of the upper level walkway for the boldest color used in the model. While it might seem like all of the architecture in Napier is Art Deco or other historical styles, there was also one modern building that impressed me. Just north of the Masonic Hotel, the MTG building was built in 2013, yet it actually incorporates two heritage buildings.

The two older buildings incorporated into MTG are: In addition to refurbishing the two existing buildings, a new wing was constructed which now forms the gallery and main entrance foyer. It is a civic complex housing a combined museum, theatre and gallery (the name MTG being an acronym for its intended functions). Recently, the rear of the building has been occupied by the city’s public library as well. The library was moved because its existing building was deemed unsafe under new seismic standards introduced in New Zealand after the 2010 Canterbury and 2011 Christchurch earthquakes. The new wing and the overall project were designed by Richard Daniels of Opus Architecture. It has won several architectural awards due to its sensitive incorporation of heritage buildings along with an appropriate modern wing. To read more, see this article at Architecture Now. I wanted to include the MTG building as I love its modern appearance but with elements which just fit in a city where almost all the architecture is from a single decade. As Tom says in his book, “Art Deco is inherently decorative” which makes it a nice style to explore with LEGO. As one of the first architectural styles to go global, it is possible to find local examples in most countries. If you want to learn more, I suggest you start with Tom’s book The LEGO Architect, then search online to find local examples of Art Deco architecture that you can visit!

What architectural styles are popular where you live, or where you are planning to visit? If you see something you like, build it using LEGO when you get home. You might even be able to submit it in our ongoing LEGO Architecture contest!

Photos by Christine Coste unless otherwise noted. Visit the About page for more info about our journalistic standards and affiliate programs.