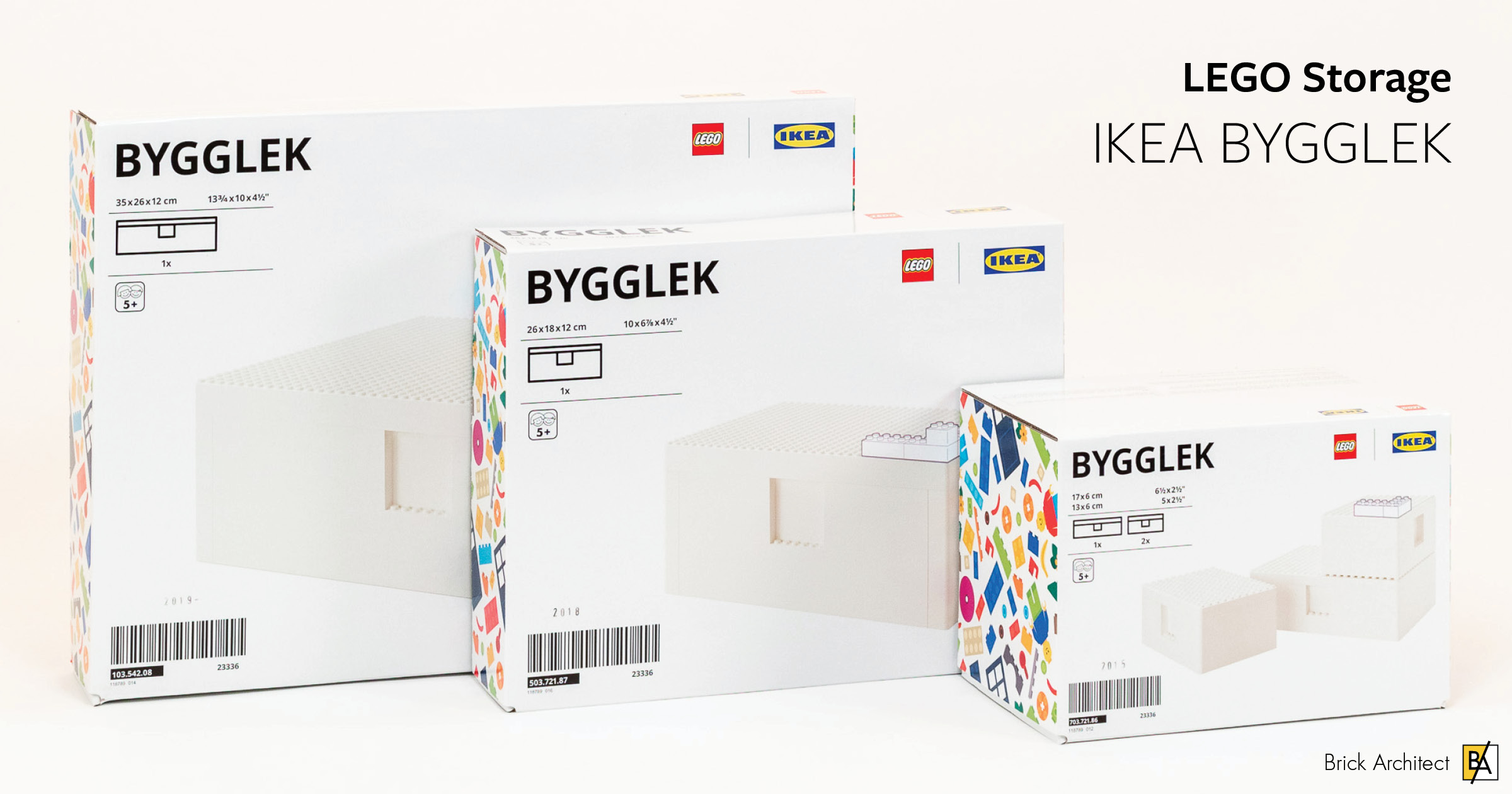 Two of the strongest Scandinavian consumer brands have teamed-up. The LEGO × IKEA Partnership resulted in a new range of LEGO Storage Products—BYGGLEK.

Two years ago, LEGO announced a partnership with IKEA to create LEGO Storage products for kids. The IKEA BYGGLEK product line was announced earlier this year, and released in Western Europe and North America on October 1. Of course I picked up one of each size to check them out!

The complete BYGGLEK product line includes four products; three are LEGO Storage boxes, plus a small box of LEGO pieces (which is outside the scop of this review).

The large and medium boxes are easily assembled at home, and the smaller boxes come pre-assembled. As we will learn later in the article, they are clearly designed and produced for IKEA by The LEGO Group, which is why the boxes adhere to LEGO dimensions and the studs have good clutch power (and the LEGO logo).

Outer dimensions in the analysis below does not include the height of the studs on the top of each box, because that height goes away when the boxes are stacked. 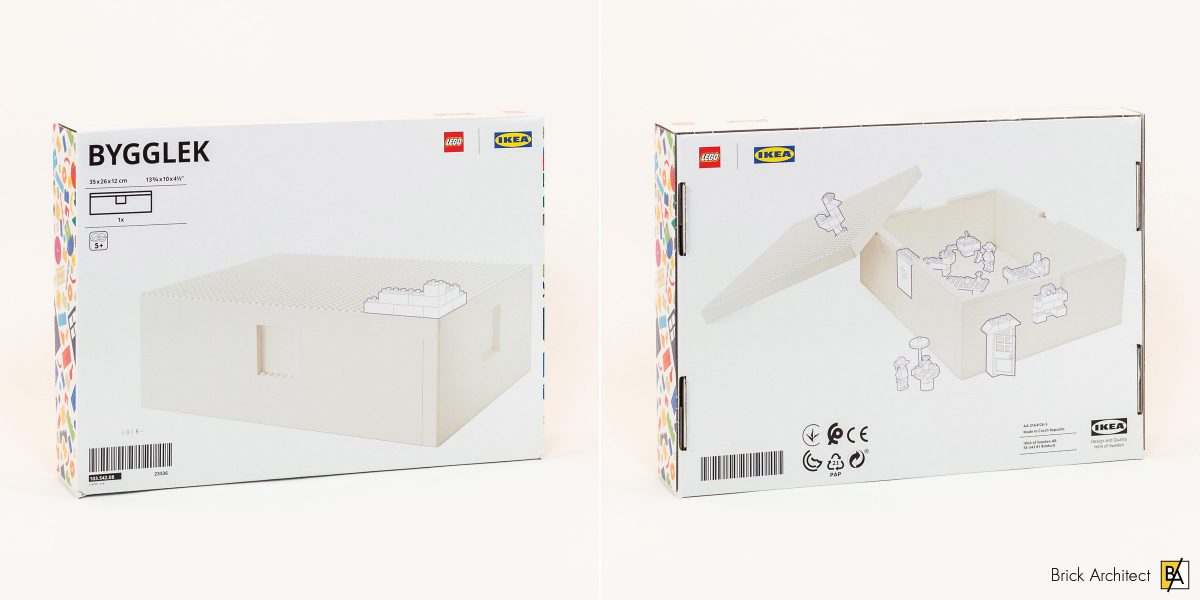 The internal height of the Large and Medium box is just 9 bricks (with studs on top) because of the reinforcing ridges on the underside of the lid. 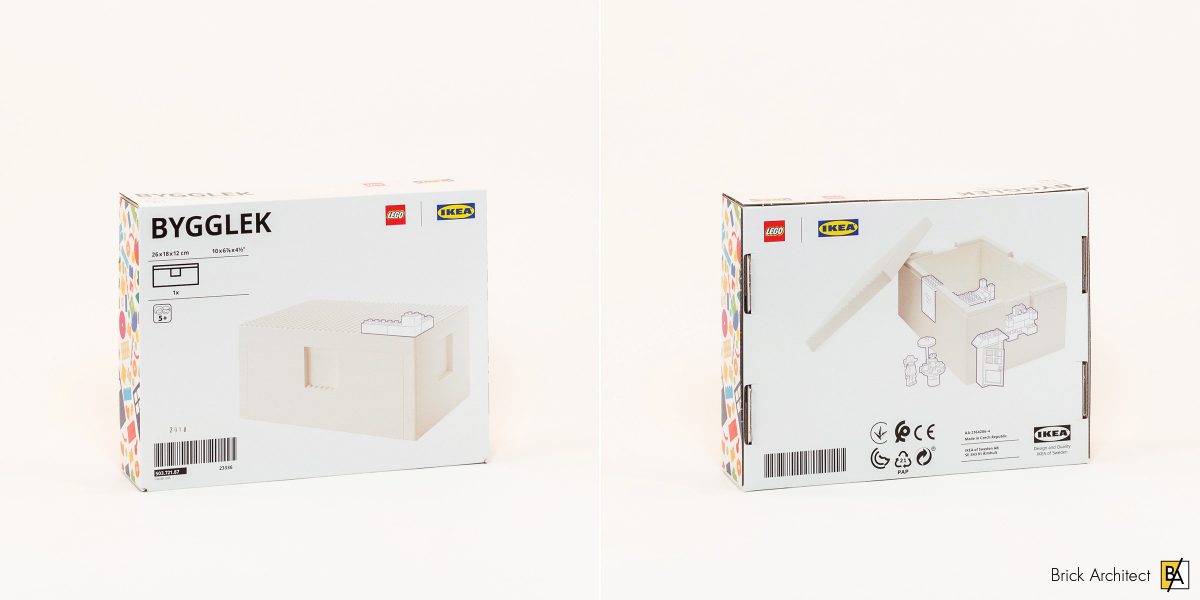 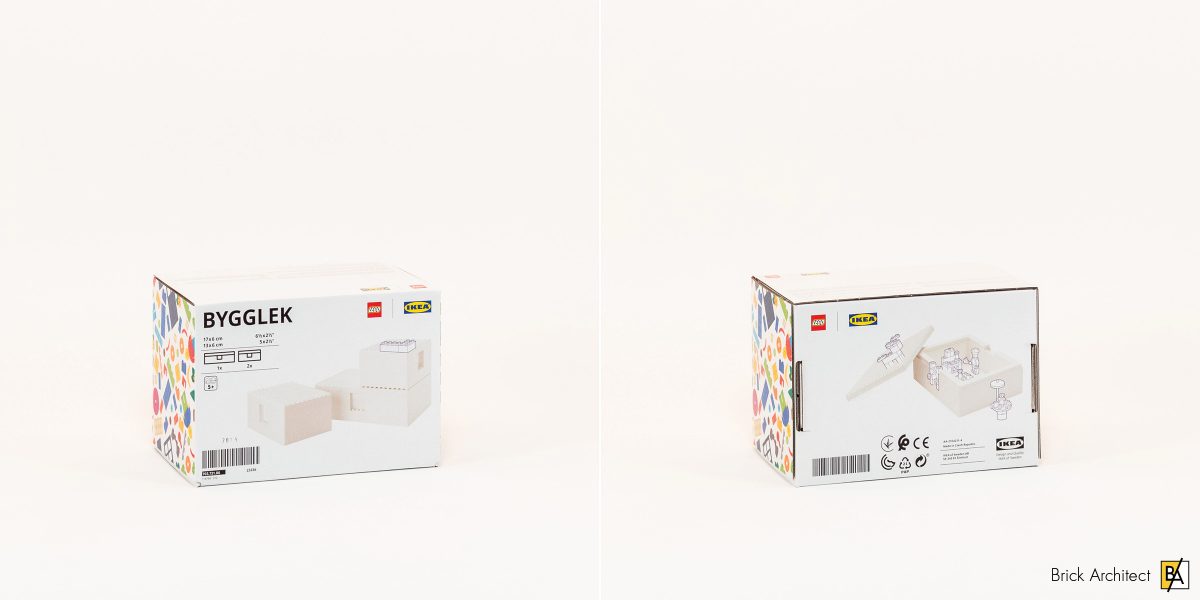 With a tiny capacity, and a storage density of well under 50%, this product serves little role as serious storage for AFOLs.

The internal height of the Small box is just 4 bricks (without studs on top). This is caused by the reinforcing ridges on the underside of the lid.

You get two Very Small and one Small box in each package.

The very small box is half the width of the small box. This makes it so small that it’s quite cute, until you open it… The 2-stud thick walls feel wildly out of place for a box this small, and the storage space within the box is miniscule.

Unlike the Small box, the very small box allows a more generous internal height of 4 2/3 bricks (without studs) because it does not need reinforcement on the lid. (It still offers a terrible storage density.)

The large and medium boxes have to be assembled when you get home. (That’s why the cardboard boxes are about half as tall as the assembled boxes.) By designing it to be flat-packed, they definitely reduce shipping costs, and probably reduce production costs by using much smaller moulds.

Each box is comprised of a lid, two long sides, two short sides, and the bottom. The sides attach to one another using a plastic intrpretation of the classic “tongue and groove” woodworking technique, with the added detail of a retaining clip when it is pushed all the way in. 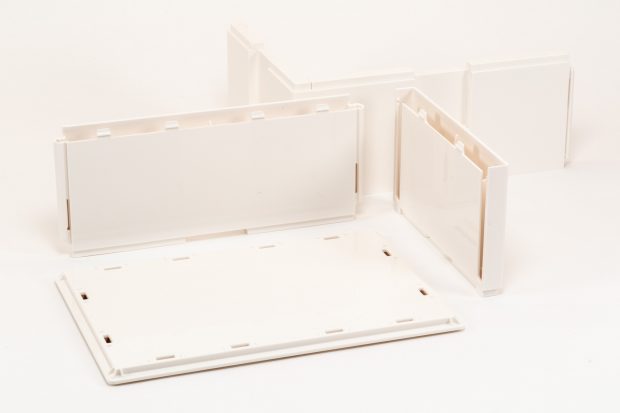 The Medium and Large boxes attach with tongue-and-groove and clip connections.

Attaching the bottom requires a bit more force, as you walk around the perimeter pressing the clips along the bottom edge of each side into rectangular slots in the base. 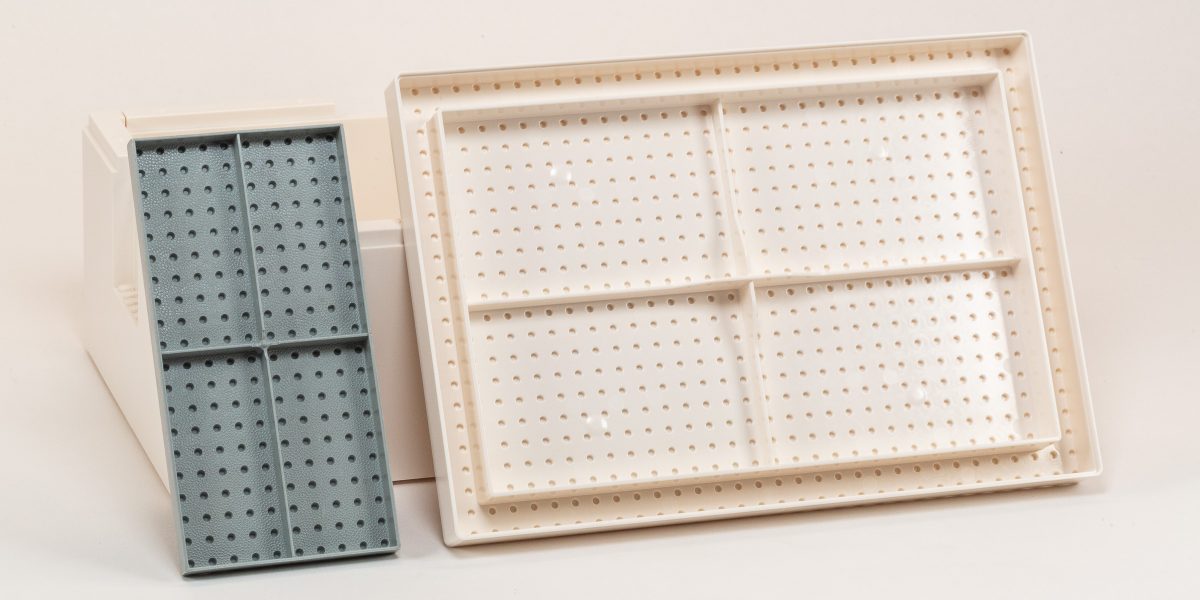 The underside of the lids closely match the design of early “brickplates” like this 10×20 from the 1960’s.

I have heard other reviewers complain that it is difficult to disassemble once built, but I found that it is easy enough to apply pressure to one clip at a time, releasing the base from the sides. The sides are even easier to remove, requiring just a little bit of pressure to release the retaining clip.

It was a surprise to see markings on each part that perfectly match those of official LEGO Elements, complete with a 5-digit Part ID for each unique piece. Combined with the indication on the box that it was “Made in Czech Republic”, I have no doubt that the parts were produced by the LEGO factory in Kladno (one hour west of Prague). 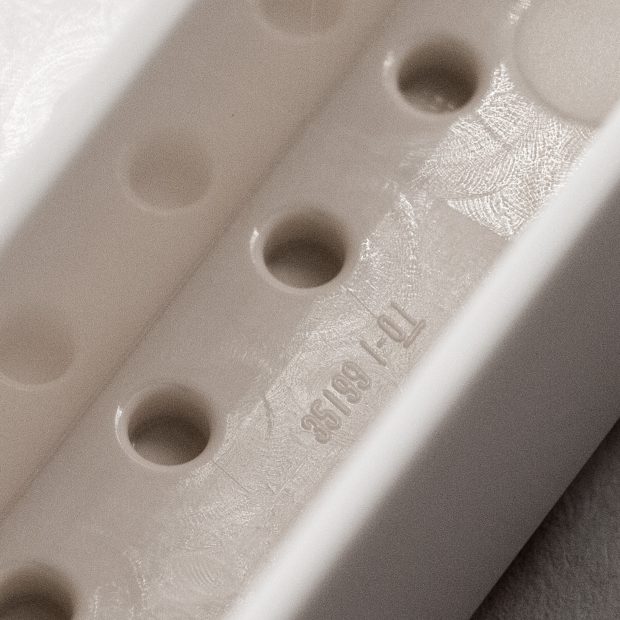 Every part has a familiar 5-digit LEGO Part ID.

Since the parts were clearly designed by LEGO, these three sets contain a lot of new genuine LEGO parts. Further, this reflects two new connection types which are (technically) within LEGO System of parts. (At BrickCon this weekend, LEGO Element designer Henrik Andersen explained that while new parts are common, new connection types are extremely rare!)

The third product contains one small and two very small boxes—that’s why two sizes are listed for that set. (The smaller boxes come pre-assembled, but each is made from two parts and a lid.) 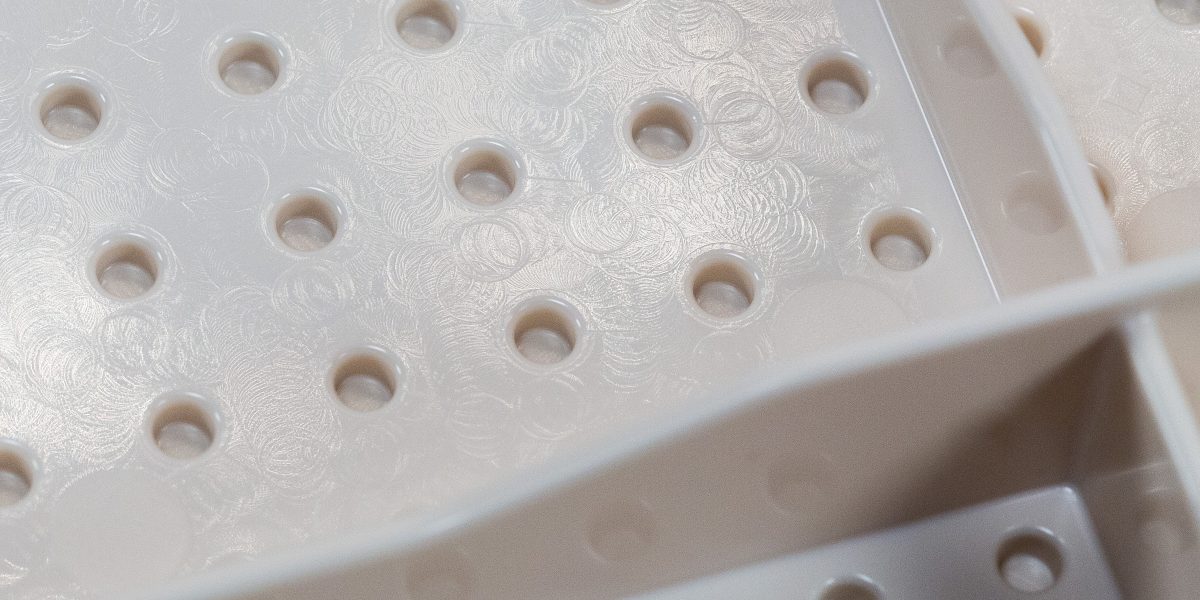 Tooling marks clearly visible on the underside of the lids.

One other interesting observation is that the mould used to produce these parts is not uniformly smooth like most LEGO parts. A pattern of circular marks is clearly visible on the underside of the lid, suggesting that this side of the mould was not milled with the same high resolution and mirror finish that we see on most LEGO parts. (It is possible that these marks will become less visible when the mould has been used for a longer time.)

I am unusually conflicted as I try to wrap-up this article. On the one hand, the product does seem like a good fit for the target audience of younger builders. The boxes are easy (for an adult) to assemble, and invite play with the large studded lid. The recesses on two or four sides (depending on the container) allow you to decorate the box exterior, or label it to reflect what is stored inside. This is very helpful if you (or your kid) has a medium-sized LEGO collection that is sorted into broad categories like Bricks, Plates, Curved/Slope, Technic, and Minifig/Accessories.) 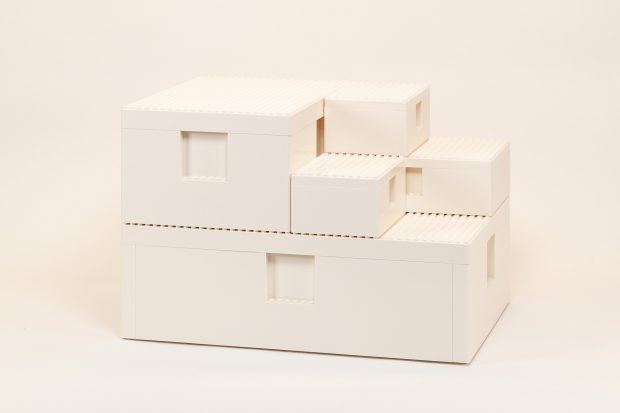 Since each box is half (or 1/4) the size of the next largest box, they stack together beautifully.

That said, it falls short of what it could have been for all audiences with some small changes. The first concern is the lack of a tight-fitting lid. This makes it hard for kids (or adults) to transport LEGO between rooms or outside of the home without worrying about making a huge mess and losing parts. The second big issue is the lack of a real handle to carry the containers. (While products with a large lip also have poor storage density because they can’t be packed tightly on a shelf, they are easier to carry.)

Another issue is that it’s hard to get rectangular parts out of the bottom of the box because it has a sharp corner. Rounded corners help parts slide around the radius and into your hand. Lastly, I strongly dislike the choice of using white plastic instead of clear plastic, especially for the bottom of the box. Clear plastics allow you to lift the box in the air to find the part you need which has fallen to the bottom of the container.

Lastly, I’m afraid that a variety of factors prevent it from making sense for msot of the adults reading this article. The first concern is the cost—while x/y/z$ is reasonable price for a LEGO set, it’s very costly for storage containers of these sizes. Secondly, the storage density is not as good as some other options due to the thick, hollow walls, and the inefficient design of the lid and base. And that’s not to mention the issues we already called out about the lack of a handle, the lack of a tight-fitting lid, and the opaque mateial which makes it harder to see what’s at the bottom of the box. 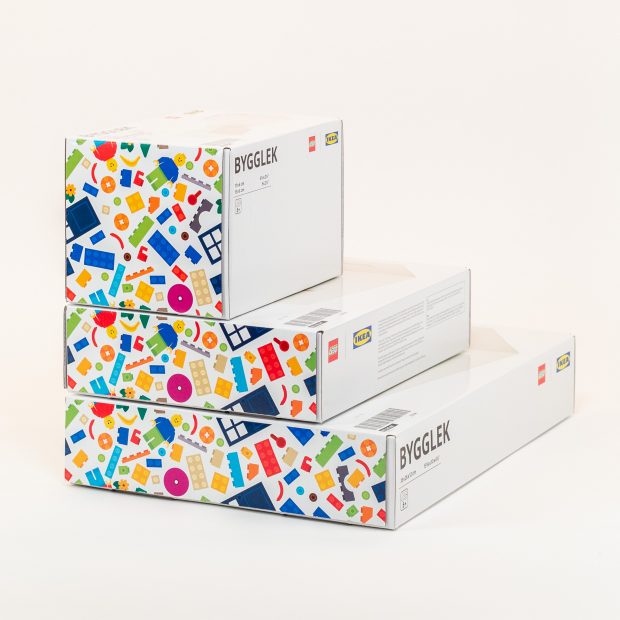 A lot of Love of the Brick went into the product and packaging design.

I have to acknowledge that these products have clearly grown out of a deep respect of the LEGO System of parts, and even the packaging reflects the LEGO brand in a way that is sincere, while also allowing some of IKEA’s personality to show through too.

Given this mix of strengths and weaknesses, Large and Medium IKEA BYGGLEK Storage Boxes earn our 3/5 Stars (Good) rating for children with modest LEGO collections, but just 2/5 Stars (Acceptable) for Adult Fans of LEGO. The Small and Very Small boxes are pretty useless due to the extremely low storage capacity, which is why they earn just 2/5 Stars (Acceptable) for all audiences.

While IKEA BYGGLEK isn’t the storage solution of my dreams, let’s hope that a continued collaboration results in future products that appeal better to Adults!