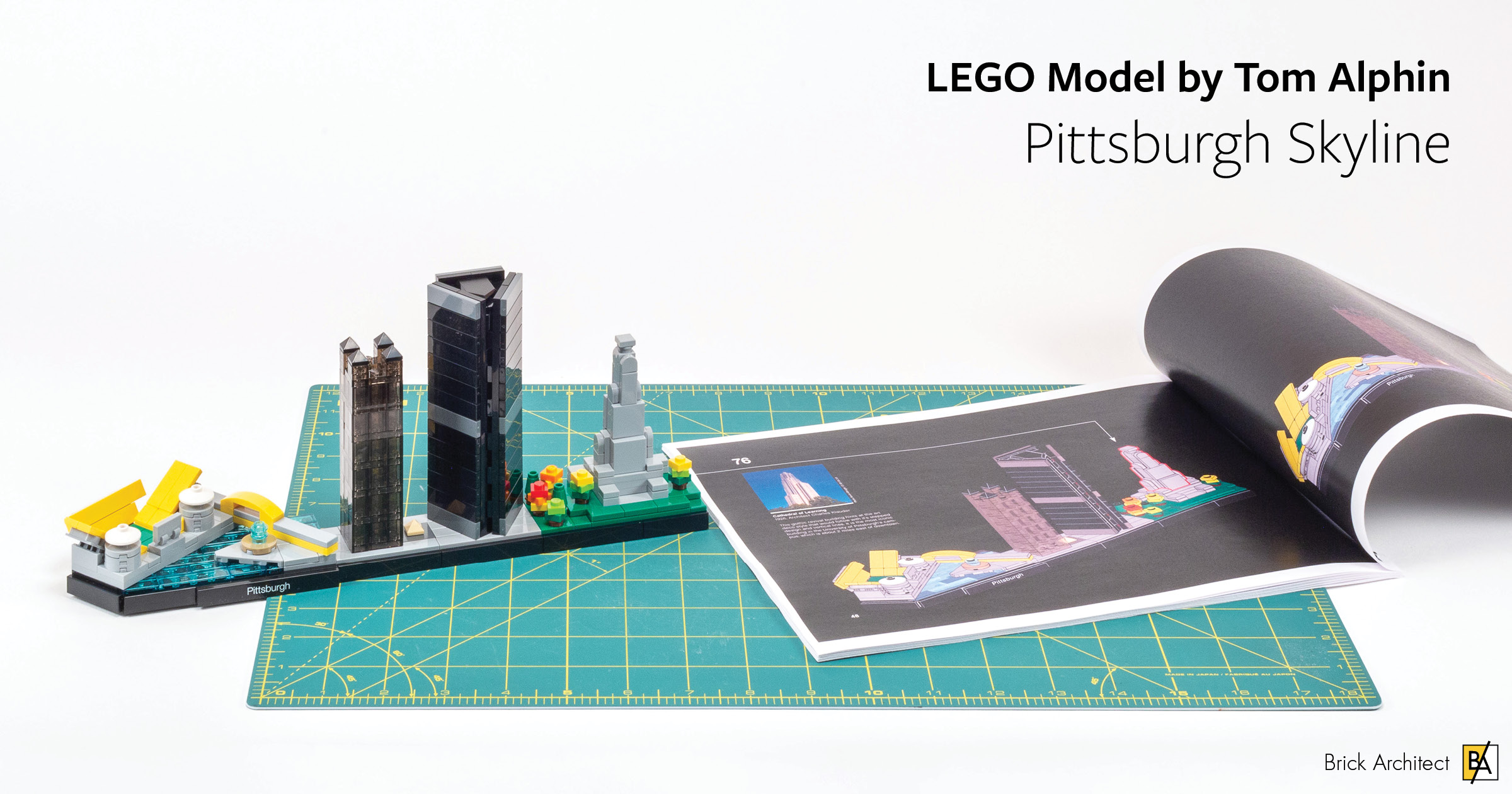 An intricate skyline of Pittsburgh which aims to meet (or exceed) the high bar of official LEGO Skyline sets.

I’m excited to share my LEGO model of Pittsburgh which is built in the style of the LEGO Architecture series. The model adheres to the design rules followed by previous official sets, but with a 37° twist. That’s right, I’ve gone off the grid to more accurately reflect the geography of the City of Bridges.

This article focuses on the build process and the selection of buildings/landmarks I decided to include in the final model. I’ve also included photos of the model, as well as excerpts from the building instructions. (A future article will use this model as a case study to explore how to create better LEGO Skylines of your favorite city.)

The model includes 495 pieces, but just 105 unique elements (including a custom-printed “Pittsburgh” nameplate). Easy-to-follow building instructions and the small number of unique parts was the result of a deliberate design process that mimics the review process that The LEGO Group follows to produce official LEGO sets. (Earlier drafts used closer to 150 unique parts and were not as structurally sound.)

The custom kit was designed at the request of Bob Kueppers. (He provided a copy of #21038 Las Vegas Skyline, the (nearly) unreleased version of the Las Vegas Skyline containing the Mandalay Bay instead of the Bellagio.) It’s a pleasure to return the favor with this custom skyline based on a city that probably won’t be featured in an official set.

I designed the instruction booklet in the style of the LEGO Architecture series.

The parts were carefully inventoried and bagged for shipping. This resulted in about a dozen small bags containing around 50 parts each. A detailed instruction booklet was designed using Bricklink Studio and Adobe InDesign. Instead of a one-page spread at the beginning of the booklet for each landmark featured in the model, I included inset photos and text about each building throughout the building instructions.

The model begins the same way as every other skyline—by assembling a sturdy base. After a few very straightforward steps, we build a carefully designed sub-assembly which will be installed at an angle.

The base will be 37 studs wide and 10 studs deep (due to the angled section).

Folks who look back fondly on Geometry class may be able to immediately recognize the trick I employed. It turns out that a triangle with sides of length 3, 4, and 5 is a right triangle. The front edge of the module which will contain the stadium is 10-studs long; exactly double the length of the longer side of a 3-4-5 triangle. 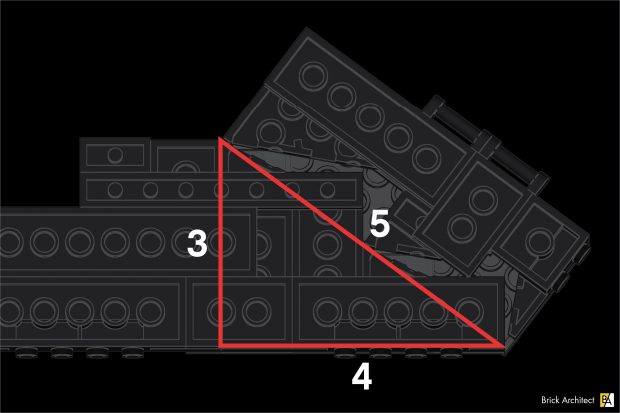 The angled section of the base relies on a 3:4:5 right triangle.

Yellow plates are hidden in the base as an homage to the cities popular black and gold color palette.

Pittsburgh is strategically situated at the confluence of the Monongahela and Allegheny rivers. The very point where they meet was once a fort, and is now a beautiful state park. A circular fountain was installed at the point in 1974, and the Fort Duquesne Bridge directly behind it was completed in 1969.

Inset images teach you about Point State Park and the Fort Duquesne Bridge.

Most importantly, the model includes a small amount of water on both sides of the point. The point itself was made possible by two new LEGO components released just last year: 4×2 Wedge Plate, Pointed (parts: 65426 & 65429).

While the fact that my wife is a Steelers fan may have slightly influenced my decision to include Heinz Field in the model, the reality is that the massive sports stadium is a key landmark in the city since it is positioned on the North side of the river, directy opposite from Point State Park. Including the stadium anchored the riverfront as a key element of the model. 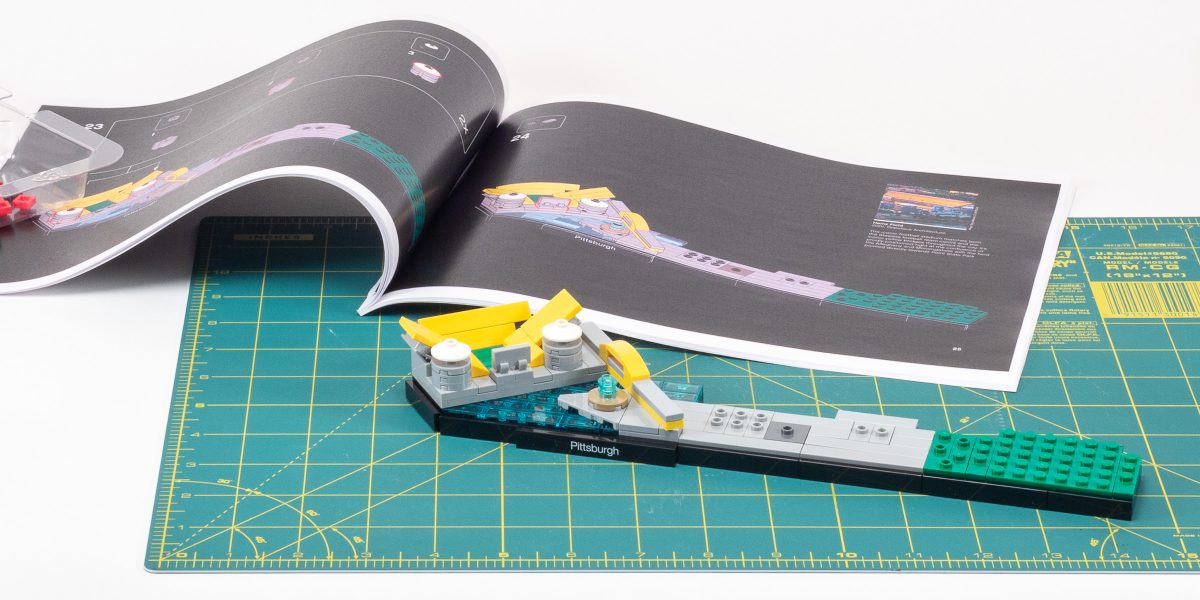 As you can see in the photos, I took some liberties to ensure that the completed model is similar in size to the official sets. In addition to a smaller scale for the front facade of the stadium than the rest of the buildings in the model, it is much less deep than the real stadium. A hinged panel on the back of the assembly gives the illusion of greater depth when viewed from the front.

PPG Place Tower is the tallest of several buildings in a multiple block development in the heart of downtown. The buildings are clad in a dark glass exterior, with simple triangular protrusions at regular intervals. This is most evident in the taller PPG Place Tower building, which has an exerior form that looks like a stripped-down version of the Gothic-influenced Skyscrapers that was popular just before the Art Deco period. 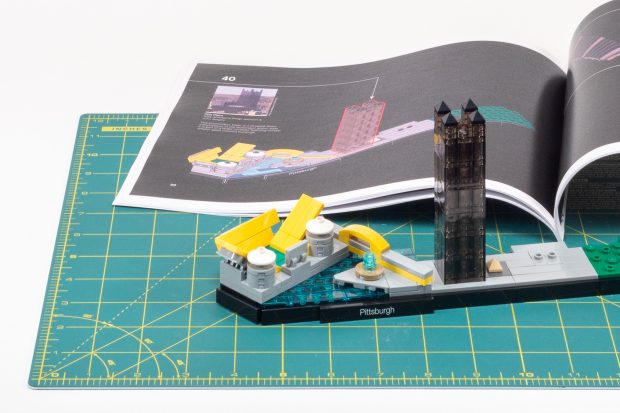 This approach of taking a classic form, stripping it to it’s essence, and re-creating it using modern materials was a hallmark of Postmodern Architecture. This makes a lot of sense, since the building was designed by architects Philip Johnson & John Burgee. Johnson in particular developed his craft in the Modernist period, but is probably better known for helping to popularize the Postmodern style.

When viewed from certain angles, the U.S. Steel Tower appears to be an unremarkable late Modernist skyscraper. But from a few degrees to the right or left, you quickly realize that it is actually a triangle. This creates an interesting appearance on the Pittsburgh skyline, where it is the tallest building, but also presents a challenge to re-create using LEGO. 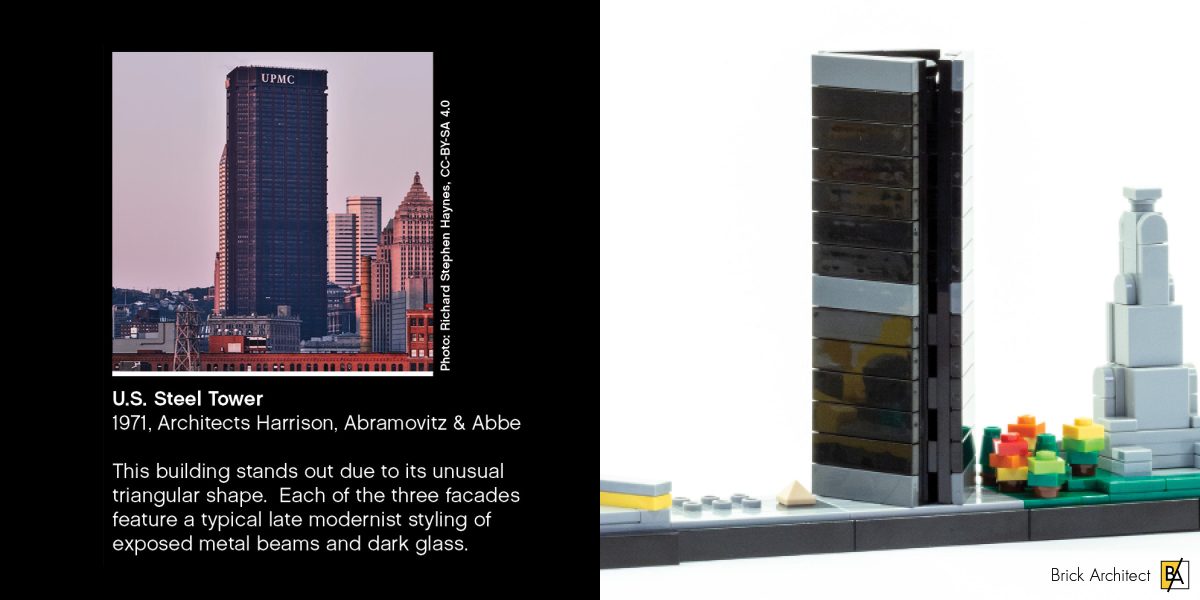 While no Technic elements are immediately visible on the model’s exterior, it relies heavily on Technic parts to achieve this unusual shape. Simply put, the model is built as three separate modules that “zipper” together along the edges. Technic axles are slid into place from the top and bottom to lock the model in place. A small brick-built assembly is attached to a two-stud high gap near the top of the model, giving it a clean finished appearance. 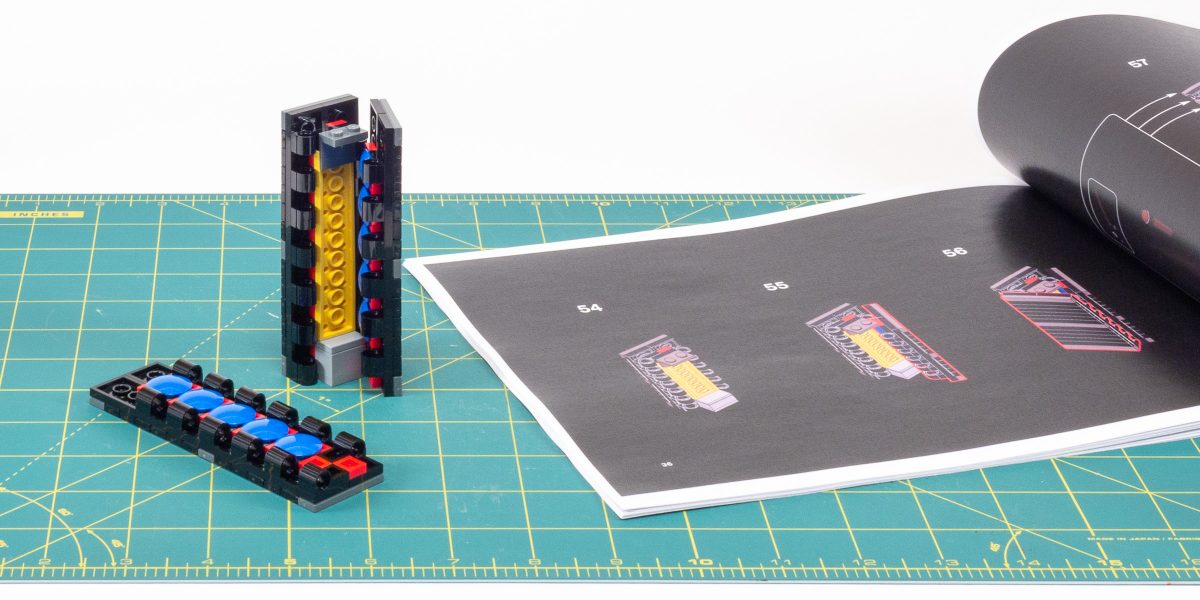 The triangular shape of the US Steel Building was difficult to re-create using LEGO.

In the same way that Red, White, and Blue parts are hidden in the #21046 Empire State Building set, I the Pittsburgh Steelers colors (Gold, Blue, and Red) in the US Steel Building model. The colors aren’t visible in the completed model, but make it easier to assemble. (The base of the model also has two long yellow plates hidden within.)

Last, but not least, the Cathehdral of Learning is an elegant but slender skyscraper that was designed and built as aesthetic preferences were shifting from the more ornate Skyscraper Gothic style to the more streamlined Art Deco style that followed. 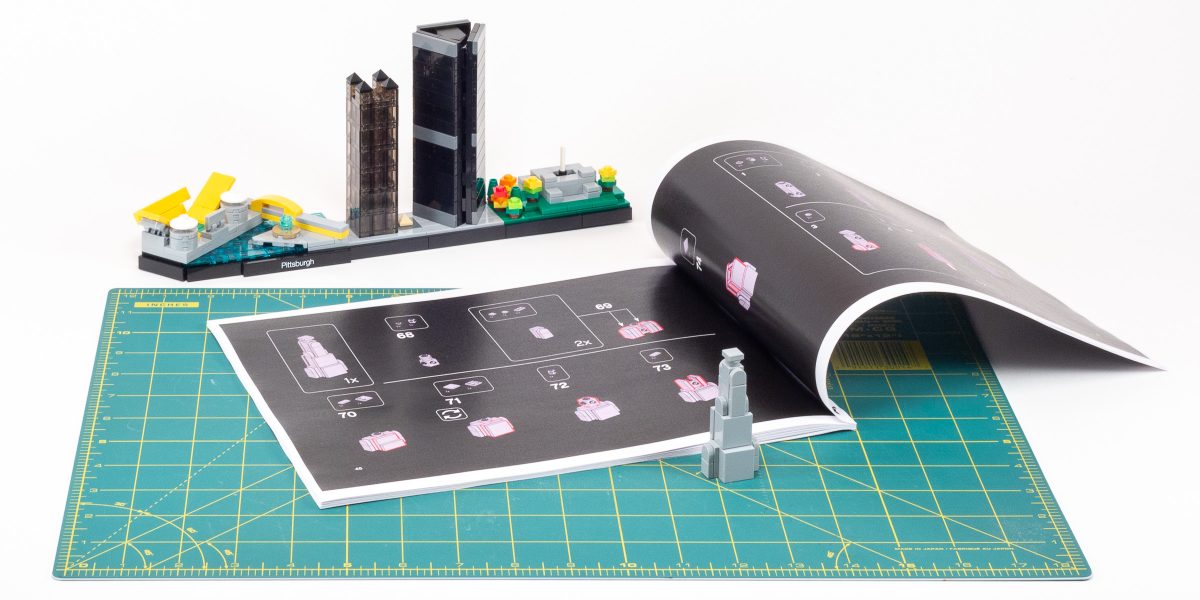 The Cathedral of Learning includes a lot of intricate SNOT detailing.

Since it is the only building in the model that’s not located in the heart of downtown Pittsburgh, I included a small copse of trees on the left side of the model to signify the residential communities and parks between the two sections of the city. Even with this liberty, the position of the buildings in the model is more “realistic” than most of the official sets.

Since this isn’t meant to be a review, I’ve decided to wrap things up by highlighting a few of the details that I am most proud of. Chief amongst them is the technique used to attach the stadium at an angle using a 3:4:5 triangle. It’s rewarding to figure out how to make details like this work, and share useful techniques with other builders!

Along the same lines, I’m glad that I found a way to include Heinz Field in the model. I used a technique in the arts called Forced Perspective, where far away objects are much smaller than in real life to give the illusion of depth. The stadium’s width in the model results in a scale of about 1:3100 (or 30% smaller than the rest of the buildings in the model).

Professional Sports stadiums are huge! At over 400 meters wide, the largest stadiums in the world are wider than the Empire State Building is tall! 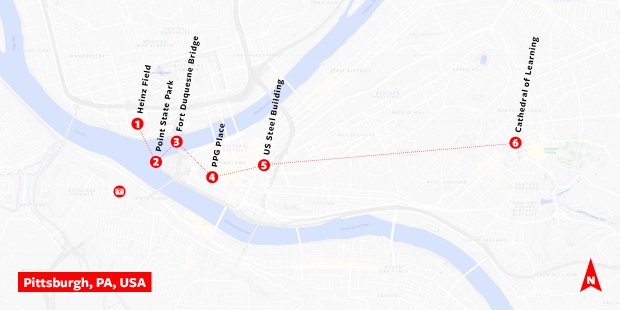 Map showing the location of landmarks featured in the model.

I also love that the finished model accurately reflects the relative position of each building in the finished model. The order matches the view of the city from the top of the Monongahela Incline, an unusual type of train that climbs the steep hillside on the south side of the river. Matching the order of the landmarks to the geography of the real city is a detail often neglected in the official LEGO Skyline sets. 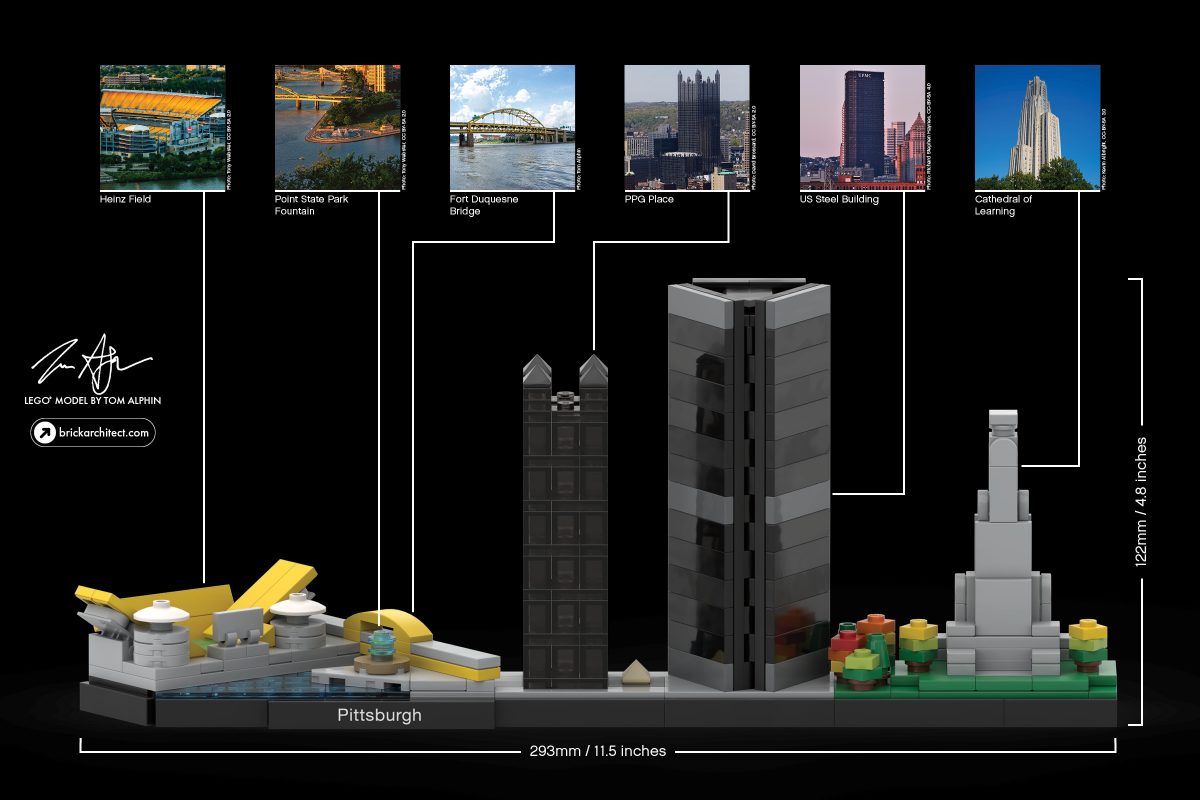 Rendering of the final model with each of the landmarks labeled.

Lastly, I am pleased that I was able to achieve a very consistent 1:2230 scale across the four buildings on the right side of the model. This is very important to me… since the buildings in a LEGO Skyline model are placed right next to one another, I want to make sure that viewers can visually compare the size of the real buildings. I am especially pleased to highlight how tall and slender the Cathedral of Learning really is—a bit shorter than many modern skyscrapers, but still an impressive structure!