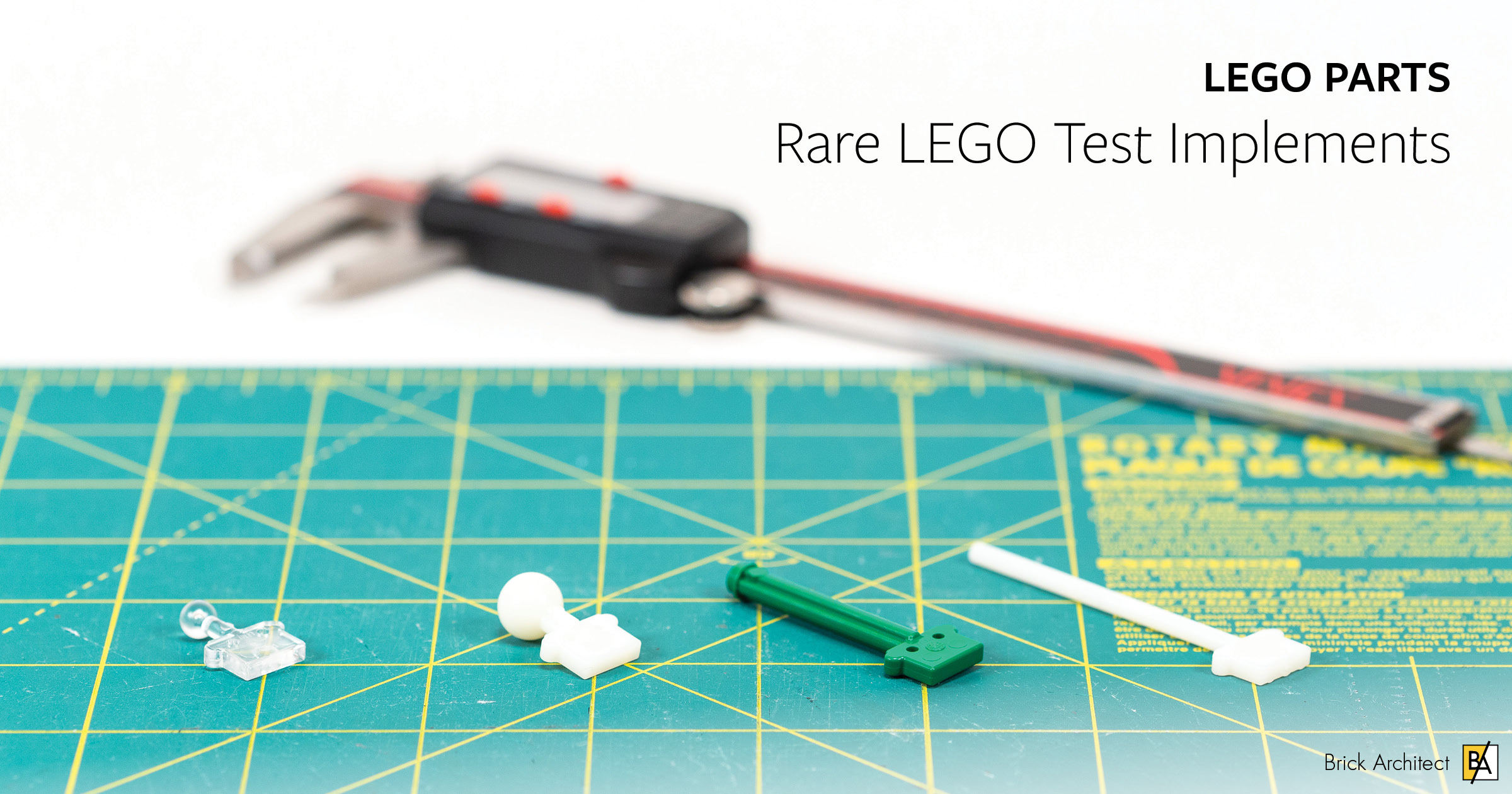 LEGO is well known for quality—but how do they test the parts? With these rare LEGO Test Implements, that’s how!

The LEGO Group has a reputation for high quality products. While a few mistakes sneak through, errors in instruction booklets, missing parts, or poorly moulded parts are very rare. That’s because they have incorporated quality control throughout the company.

For example, last year we heard from Bjarke Schønwandt, the quality director on the Consumer-Perceived Quality team during the LEGO House Virtual Fan Day. (I find their focus on “perceived” quality versus “actual” quality fascinating, but it makes sense from a business perspective!)

Perhaps the most important quality related detail are the bricks themselves! That’s why they do extensive testing of brand new part designs and constant testing of parts as they are being manufactured. (LEGO parts aren’t just made in Denmark; they are manufactured at multiple factories around the world!)

Given their commitment to product quality, it is no surprise that The LEGO Group has produced custom parts to aid in testing efforts! While these parts are not usually available to the general public, let’s take a closer look at four of these rare parts! 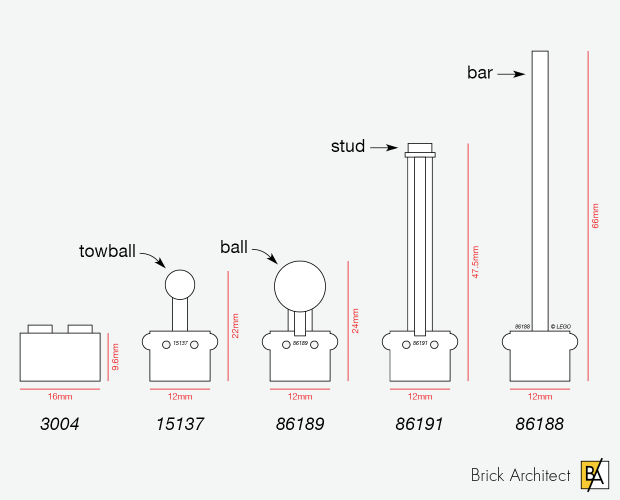 The four LEGO Test Implements that I was able to measure.

It’s no surprise that there is a simple test implement with a stud on the end. In the case of this part, it has a hollow stud on the end. The part is 47.5mm long and the version I have appears to be made using ABS plastic in 28Dark GreenGreen color. 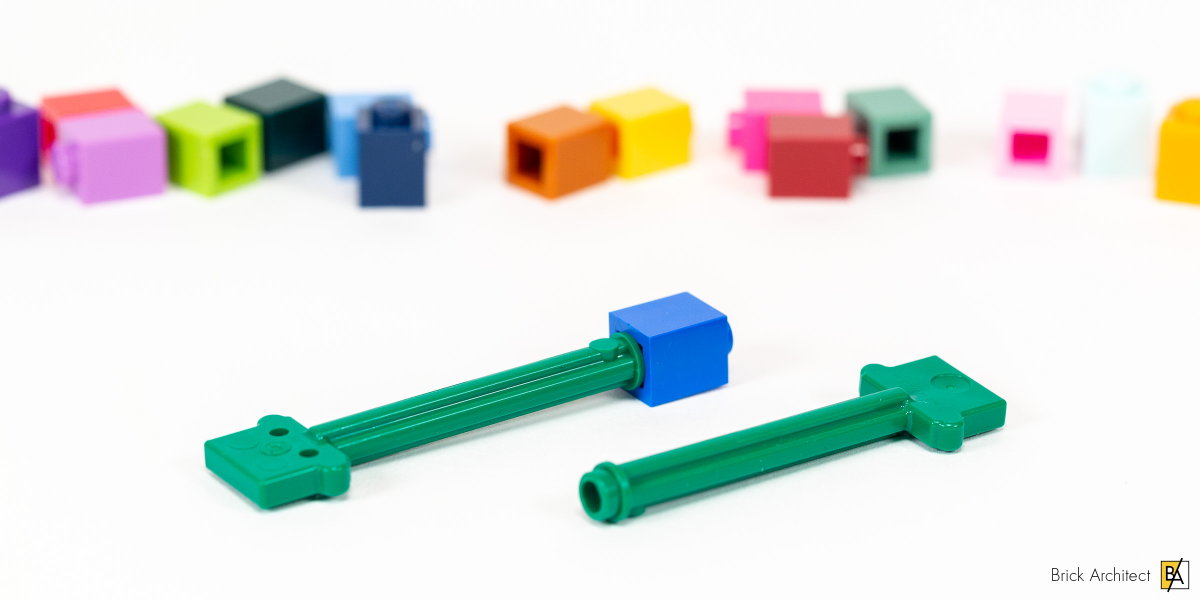 I actually have three of these parts, which is how I noticed that they have different numbers hidden inside the hollow stud on the end. One of them has the number ‘1’ and the other two have the number ‘2’ inside. (After several measurements, I was unable to detect a difference in the in inner and/or outer diameter, but it is likely that a small difference exists.) 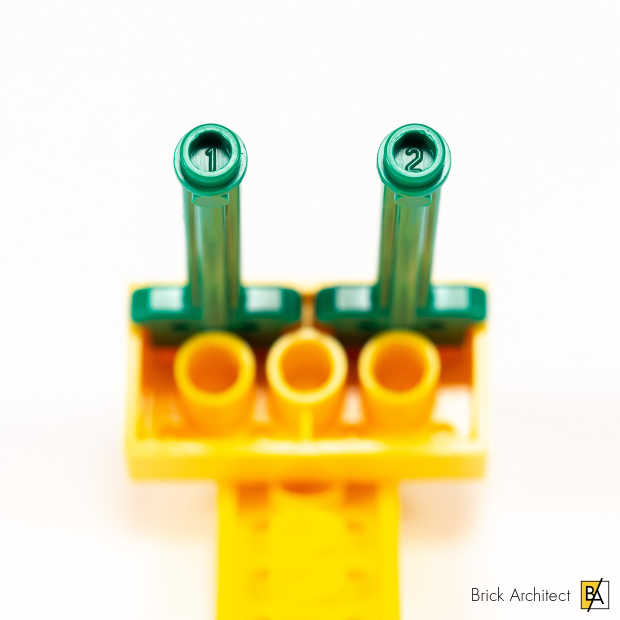 This test implement has a very long bar connection on it. It is the only one of these parts which came in a milky plastic, which I believe is uncolored ABS plastic. Including the testing connector, it is 66mm long. 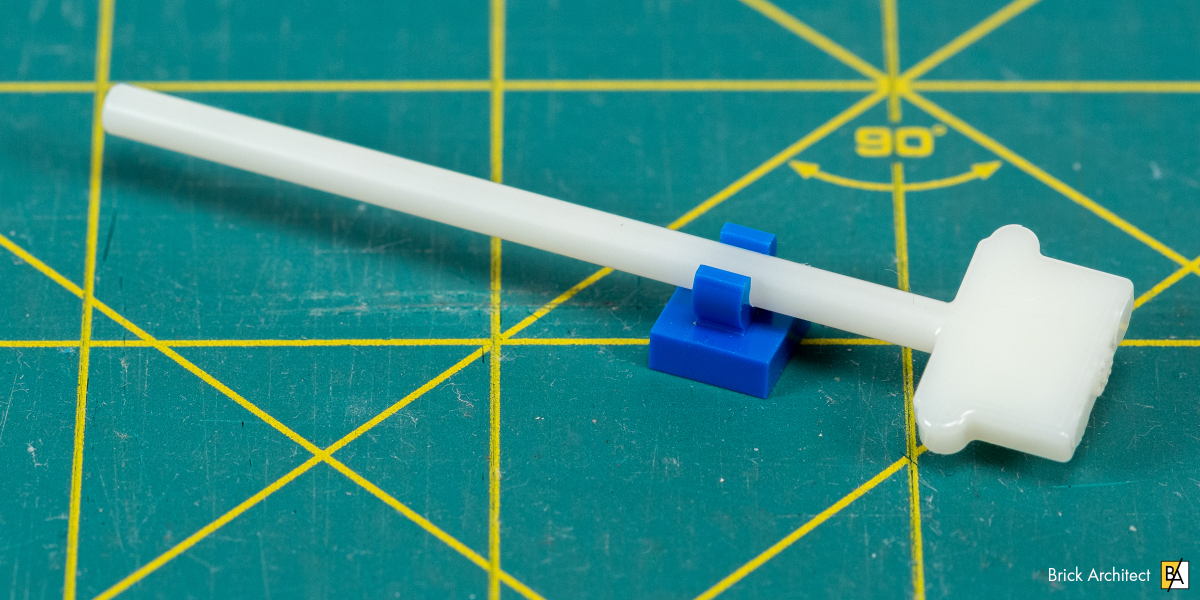 This is the only one of the four test implements which does not include the two holes in the testing connector on the base, and the part number is in a different location that’s harder to see. (It might be an earlier version of the mould.) 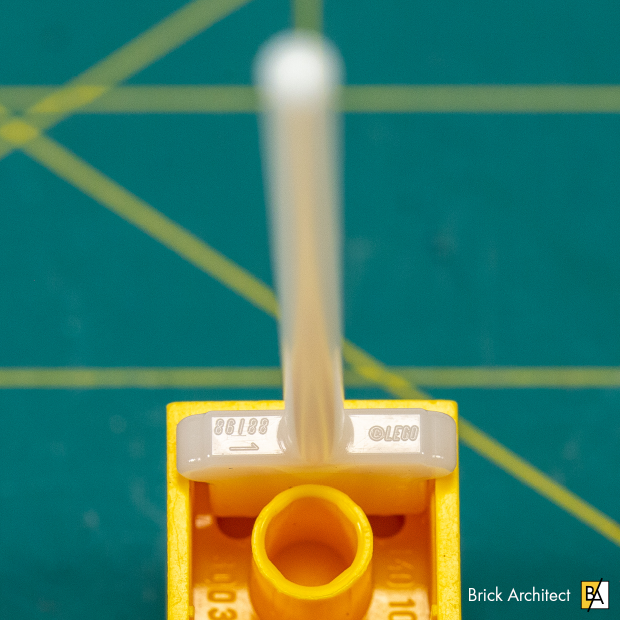 The location of the part number made it very difficult to see.

Continuing our look at these rare test implements, here’s the first of two ball joints. Specifically, part 16137 is the smaller “towball” which is used with modern “Mixel joints” as well as many older parts. 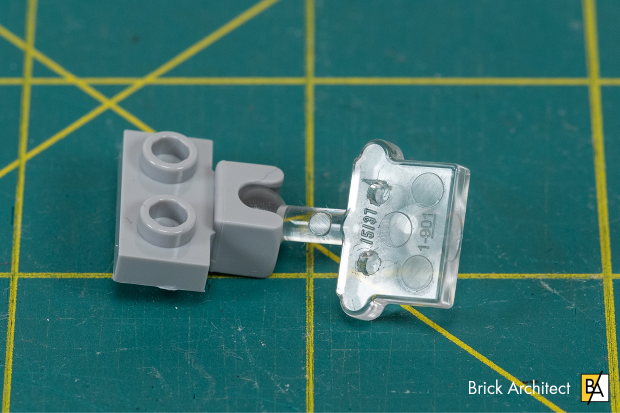 This part was borrowed from a friend, so I already took detailed notes of the part dimensions. I did this using inexpensive digital calipers which I purchased from Amazon. This is the same process that a group of dedicated LEGO fans use to the design the digital parts found in the LDraw suite. 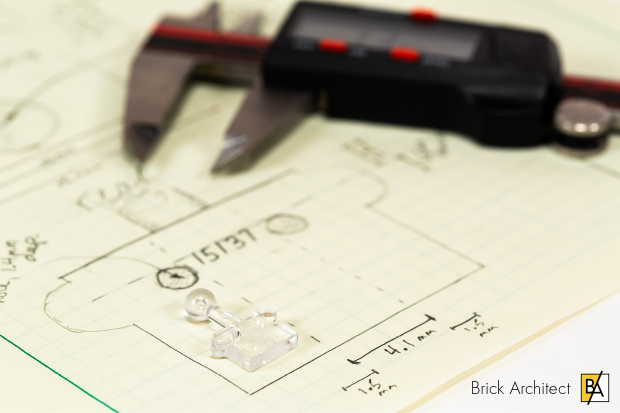 Lastly, we also have the larger ball joint which was popularized by the Bionicle series. This test part features a thicker shank than the smaller towbar piece, presumably to reduce the risk of it breaking during testing. 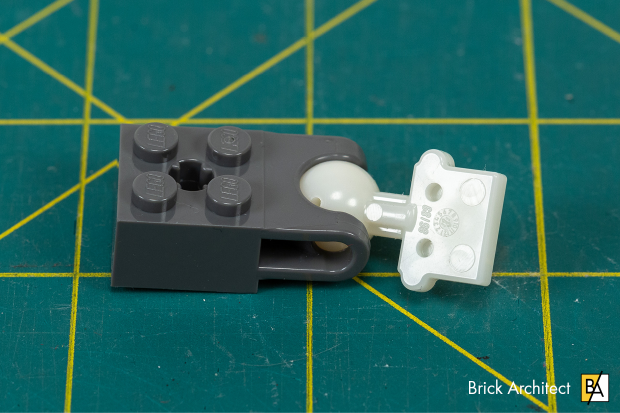 Each of the four parts has the same proprietary testing connector on one end, and a different LEGO connection type on the other end. I’m a little surprised that the parts are significantly different lengths… I would have thought that making them all the same length would have made testing scenarios easier. 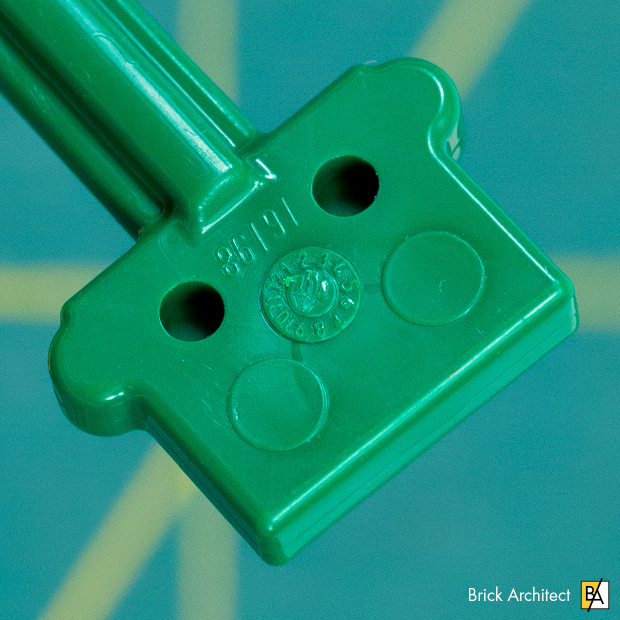 As far as I can tell, the testing connector is not designed to connect with other LEGO elements, but rather to be attached to testing hardware (which is probably made out of metal). Three of the four parts have two cylindrical holes at the same position on the base. (While it is just a guess, I suspect that spring-loaded metal pins or small screws attach the test implement to the testing hardware using these holes.)

I suspect these parts are used for at least two purposes:

While the connection is proprietary, it happens to fit pretty well into the bottom side of a 2×2 brick. This is probably a coincidence, since the dimensions of the connector do not line up very well with standard LEGO units.

While I’m only able to provide detailed information about these four test implements, it’s fair to assume that The LEGO Group has produced similar test implements for all System and Technic connection types.

In fact, a couple other variations have been revealed. In this article at New Elementary, you will find a photo of two similar test implement featuring other common connection types. 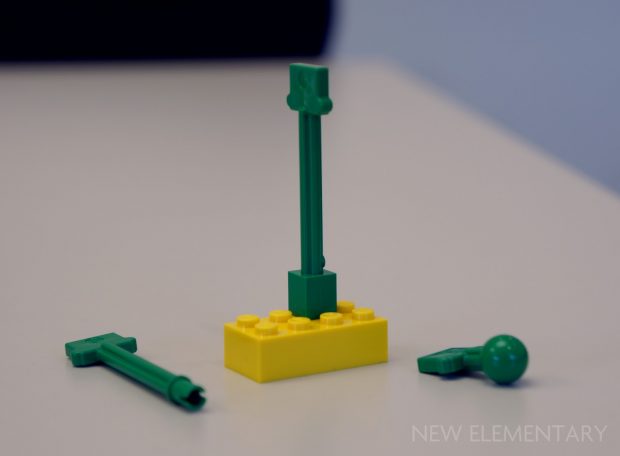 In researching this article, I found a few interesting resoures about LEGO Quality Testing. I’m always eager to learn more about this seldom-discussed aspect of The LEGO Group’s strive for quality.

I hope you enjoyed this nerdy look at rare LEGO testing implements. Do you have more information on other LEGO Testing parts, or how they are used by The LEGO Group? Let me know by sending an email or leaving a comment below!
The parts described in this article were provided by an enthusiastic LEGO fan who received these parts directly from The LEGO Group. This was probably an accident, as non-production parts are not meant to be available to the public. Please don’t ask—these parts are not available for sale!