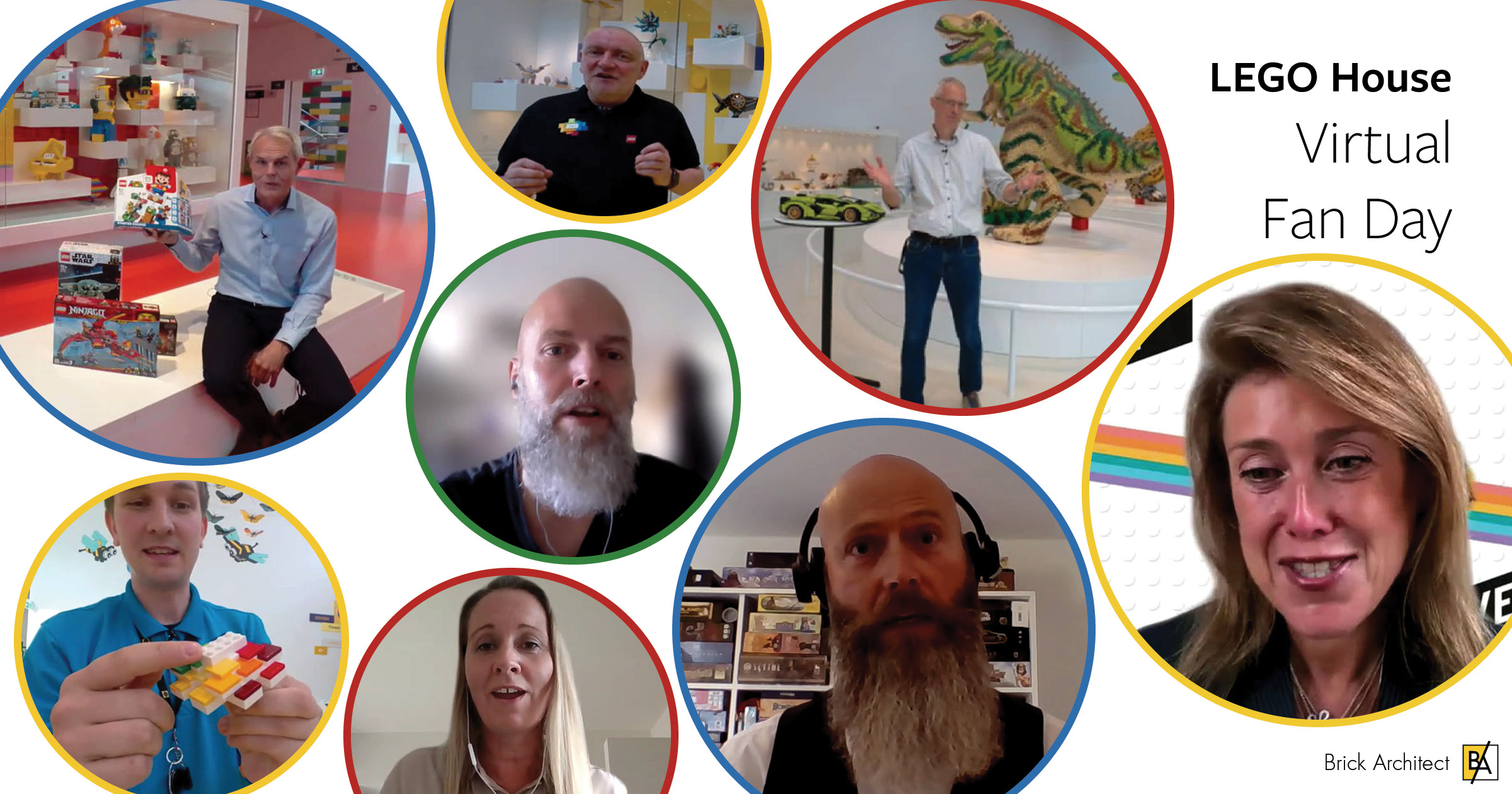 LEGO House (Virtual) Fan Day offered a rare opportunity to learn how The LEGO Group works—these were the most interesting topics in the 3.5 hour session!

For the last several years, The LEGO House has sponsored a special day of talks and interviews for Adult Fans of LEGO. While it’s meant to be an in-person event on the same weekend as the Skaerbaek Fan Weekend, COVID-19 forced The LEGO House to re-imagine it as a virtual event.

The upside of a virtual event is that fans from around the world were able to participate (including me)! Rather than transcribing all of the talks and Q&A, I’ve highlighted the most interesting things that I learned during the 3.5 hour event, with excerpts from several of the LEGO employees who participated. I hope you learn something new, too!

1. LEGO produces about one set per year, per designer

We heard from Poul Schou, the Senior Vice President of Product Design who is responsible for about half of the LEGO sets produced each year.

Poul explained that there are about 400 designers at LEGO and a portfolio of around 400 new sets each year. While that that works out to an average of one set per designer per year, the design process is much more collaborative than that. Designers typically partner on many different sets, and only take the leading role on one or two projects per year. In total, there are about 1800 people working on new sets at LEGO when you include people working on packaging, communications, instruction design, and other roles!

2. New themes target a minimum of two years worth of sets

Poul explained that he helped develop the initial LEGO Ninjago theme after a trip to Japan in 2007. Their original goal was to outsell the “Atlantis” theme, and like most themes, they only originaly planned for two years of sets. (Ninjago was a huge success; tripling the sales of Atlantis in their first year!) 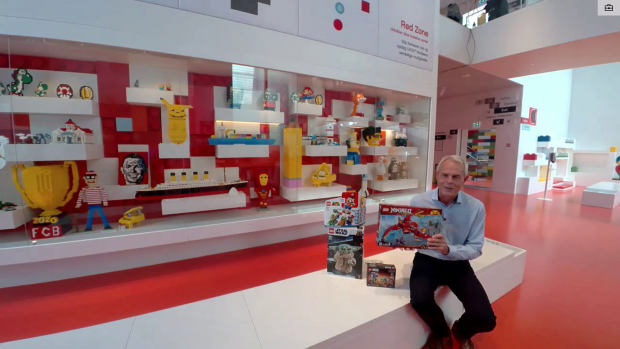 He explained that they typically design two years worth of sets, but some themes like Nexo Knights do not gain the popularity they hoped for and are discontinued before all of the originally planned sets are released.

3. It takes more than a year to develop instructions for the largest LEGO Sets.

The third session was with Kim Yde Larsen, Nanna Mazanti Drejer Friborg and Thomas Folit who work on the Building Instructions team. The team includes 60 people, with about half working on printed instruction manuals. 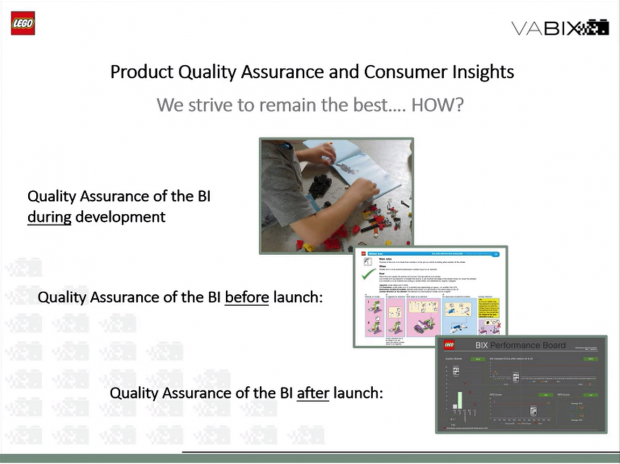 The team responsible for building instructions is involved early in the design process, and after the product has been released to customers.

Even though their team has only around 30 people working on printed instructions (for around 400 products a year), I was surprised to learn that a single employee will work on the largest sets for over a year to develop the building instructions and validate that they result in a great building experience!

One last detail that I’m glad they discussed was the importance of making sure that even the biggest and most complex sets have clear building instructions that any adult can follow. That’s because some adults buy a set because they have an affitity for a brand like Porsche, even though they aren’t very experienced LEGO builders.

The last session was with Bjarke Schønwandt, quality director on the Consumer-Perceived Quality team.

Perhaps my favorite session was the final talk with Bjarke. Why Perceived Quality as opposed to a more objective assesment of quality? “Because we listen to our customers.” That’s why his team focuses on what they call the “Keep Customers Happy” cycle. 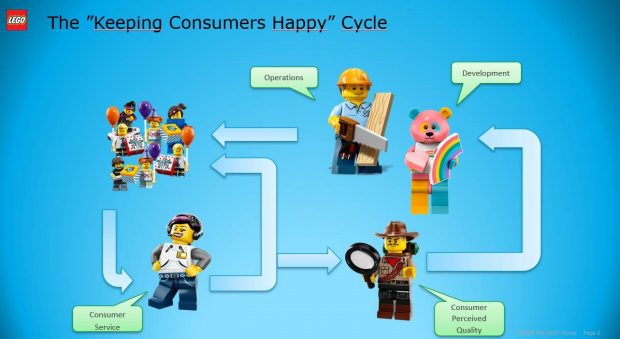 It turns out that the vast majority (86%) of customer service issues are caused by missing parts, and that the significant increase in average part count in recent years is loosely correlated to the customer complaint rate.

Charts used by The LEGO Group to track Perceived Quality over time.

The fun surprise in his presentation was how much more frequently families call Customer Support about missing minifigures in popular themes like Star Wars, than unlicensed properties like City. To his credit, he doesn’t blame parents for intentionally lying about missing parts, accepting that highly sought minifigures may get taken by another family member, lost at school, or experience similar unfortunate outcomes. (They seem to understand that good customer service is important to maintain brand loyalty.)

5. Colorant (Pigment) can get burned in the mould and change color

Bjarke was remarkably transparent about the color matching issues that appeared in #42115 Lamborghini Sián FKP 37, the latest addition to the Technic Supercar collection which was released earlier this year. The primary issue is caused by supply chain disruptions which forced them to slightly relax their color matching tolerances from different manufacturers. Bjarke described the situation visually, with a graph showing the acceptable color values for a particular pigment as one quadrant of a RGBY grid. They allowed pigment to land outside the normal quadrant as they re-established a redundant supply chain.

Two years ago, we reviewed #42083 Bugatti Chiron, the previous addition to this series. 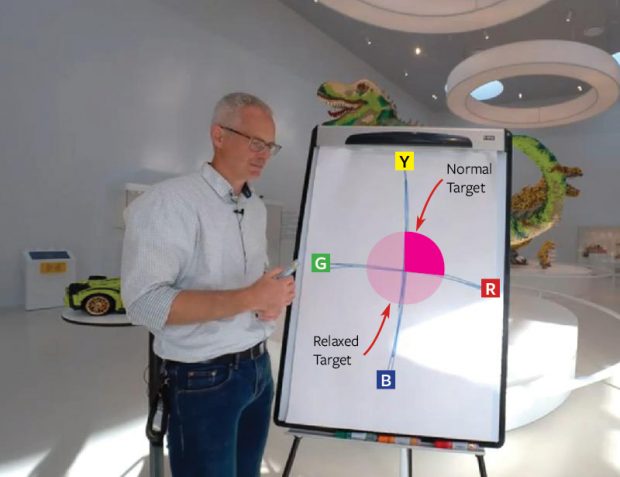 Bjarke explained that their target for each pigment is usually within a narrow range in one quadrant of the color space, but they had to relax their target while working through supply chain issues. (Illustration re-created from my memory.)

The more surprising thing that we learned is that pigments can actually burn and become discolored if they spend too much time in the moulds at high heat. This caused the most severe color matching issue in the Sián, which I believe was on part #15100 1/2 Pin w/ Hole. (You can see that the part is significantly darker in this review at Brothers Brick.)

Bjarke went on to explain that this type of issue is caused by a poorly designed mould. (As I understood his brief description, it sounds like the pathways that melted plastic flow through ebfore entering the mould were too long, causing plastic to remain in the metal block for too many cycles before being shaped into a part.) To resolve the problem quickly, they cheated by running the same mould on a faster system!

For a longer read on the topic of Perceived Quality, read this separate interview on New Elementary with Bjarke Schønwandt (from earlier this year.)

Julia Goldin is the CMO and EVP of the LEGO Group. She started off today’s presentations from her office in London.

When asked about the rationale behind their partnerships with Levi’s and IKEA, Julia was quick to acknowledge that LEGO is an iconic brand, and they are looking for partners who can show LEGO in a different way and to connect with customers in locations that they do not currently participate. She went on by explaining that they are not intending to do loads of these partnerships, but rather to focus on big, unique, and deliberate partnerships.

P.S. It’s not clear to me how a single pair of limited-release Adidas shoes qualifies as a “big” partnership, so maybe we will see more in the future.

Julia Goldin re-stated that LEGO is commited to adult fans, both through the new 18+ line, and through strategic partnerships.

She also talked about how the IKEA partnership builds on a specific learnings from their research showing that most families do not have a lot of space for kids to play. That’s why we partnered with IKEA to create boxes that serve dual functions—both as storage and play boxes.

I hope you enjoyed learning about the inner workings of The LEGO Group through this article. As always, let us know what you found most interesting by leaving a comment below!