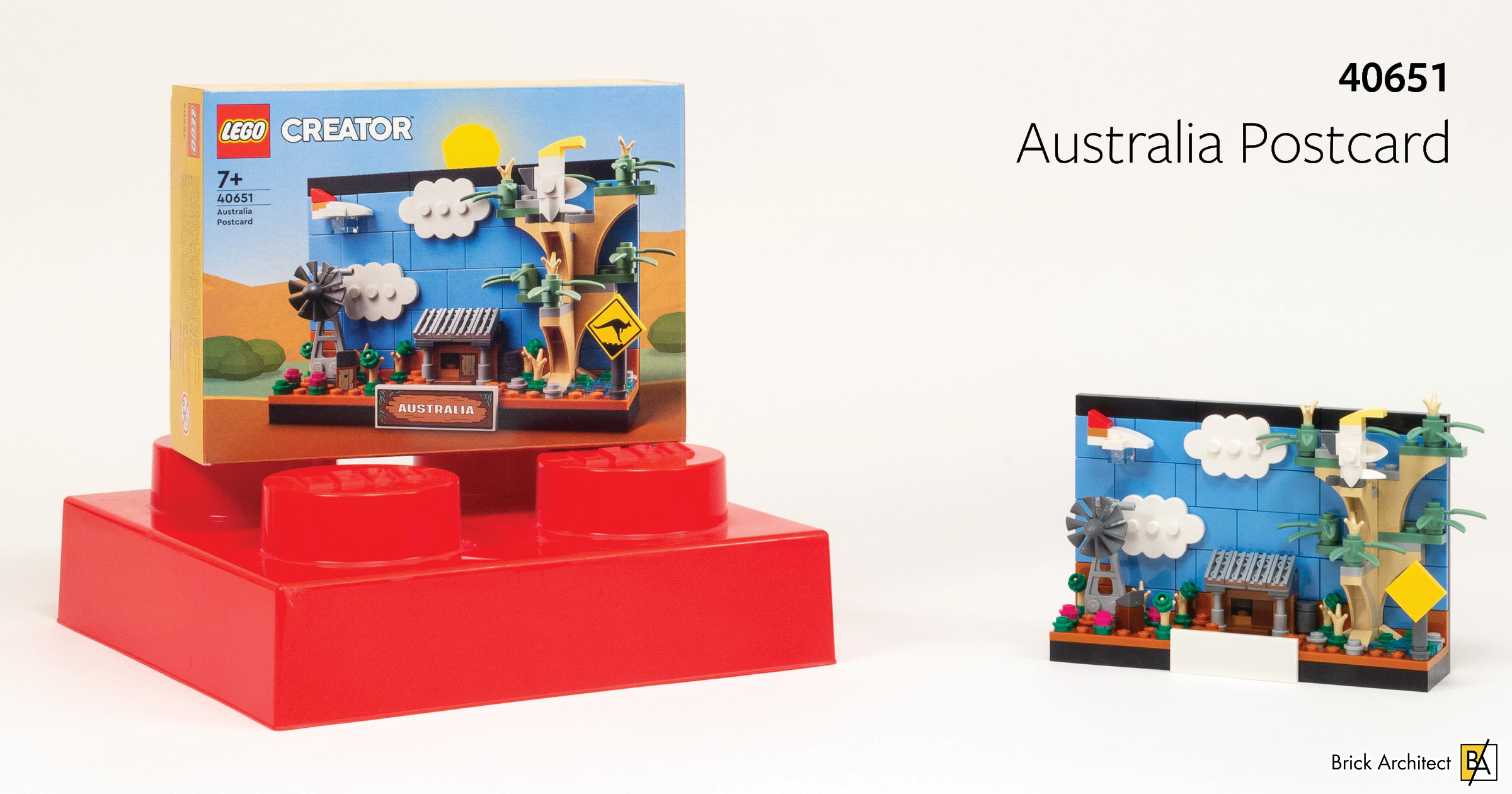 Let’s see how a ‘postcard’ in the Creator series based on an abstract location instead of a specific city or landmark stacks up to previous attempts.

In North America, on the east coast it will be available starting at midnight, which means December 31st at 9pm if you are on the west coast.

When I learned we were getting another set in the Creator ‘postcard’ series based on Australia, I quickly jumped to the obvious city — Sydney. The city has already been immortalized in #21032 Sydney (2017) in the LEGO Architecture Skyline series.

In imagining that set re-interpreted as a postcard, I am hoping for an expressive composition with the Sydney Tower Bridge rising above the Sydney Opera House at a jaunty angle. That’s the perspective you would get when looking across the bay from the water, halfway between McMahons Point or Luna Park and the Sydney Opera House. To add one more element to the composition, I would probably go with the Sydney Tower Eye, which has an iconic round top in an unusual gold color. With some artistic license they could position the tower above the bridge to balance the composition.

Well, upon opening the box, I can see that I was way off base. It really is a postcard based on Australia itself, or more specifically a scene based on the Australian Outback. While we spent a month in Australian 2019, I have not been to the Outback (besides the restaurant chain in the United States). This makes it harder for me to assess whether this model is a faithful or cheeky interpretation of the source material.

What I can see is a red desert with a windmill, tin-roofed shack, and wildly oversized tree featuring a brick-built cockatoo that is completely out of scale to the rest of the model. There are some useful parts included in this small set, but I’m not especially fond of what I can see on the cover. 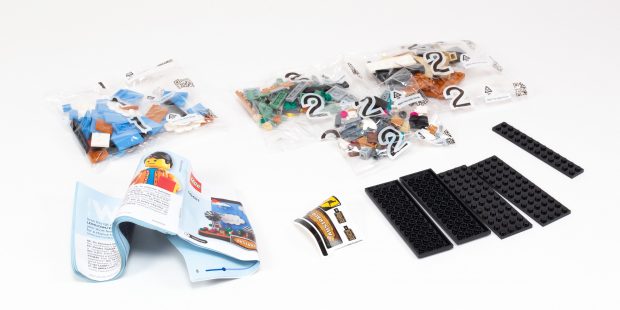 My set was marked with box code 40O2. This code indicates where and when the set was manufactured – in this case it was packaged on 40th week of 2022 in Billund, Denmark (Factory code ‘O’). As such, this set was packed around October 6, 2022.

At fewer than 200 pieces, I was a bit surprised to see two stages to this build. As with the previous Postcard sets, it’s not likely to take very long to build.

The first bag is the same as previous postcards, a simple 18×14 assembly that is comprised of one layer of plate and one layer of tile. Onto this, we attach a small airplane on the upper left, and two clouds. 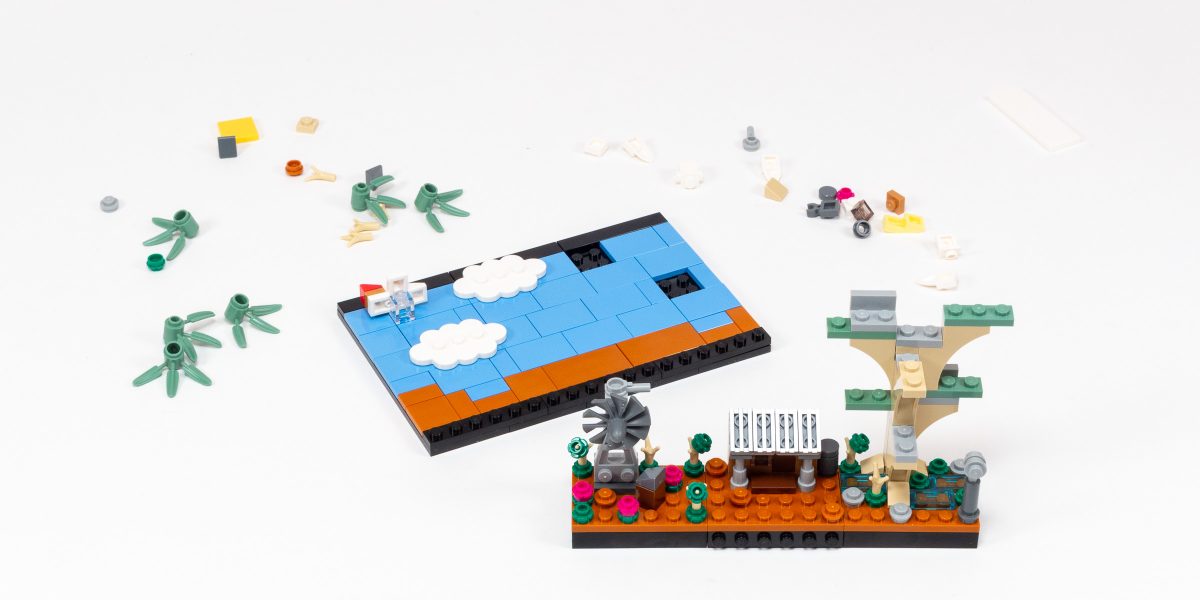 Halfway through Bag 2. (The backdrop was built in bag 1.)

Most of the build is so-called bag 2, although there are three bags with that number. Roughly speaking, we build a 4-stud deep base upon which we build the majority of our scene. On the left, we have a ramshackle windmill, a tin-roofed shack in the middle, and a tall gangly tree on the far right. 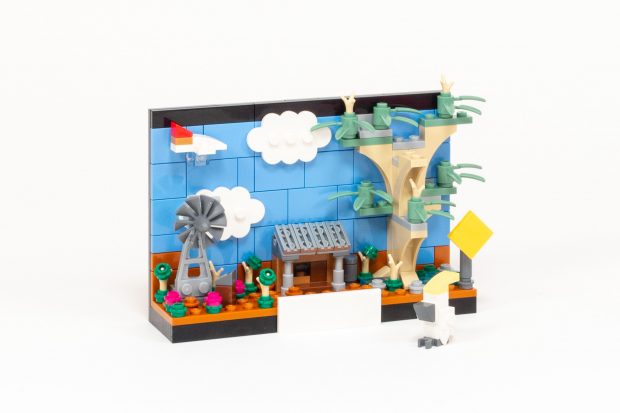 After attaching the base to the backdrop, we finish adding leaves to the tree. Finally, we create a brick-built cockatoo which is placed on one of the higher branches of the tree. I know that the Postcard sets employ a much looser sense of scale than the LEGO Architecture skyline sets, but it doesn’t make much sense when a bird is bigger than a house.

In most cases, you should assess the value of a LEGO set based on how excited you are about the model or the unique parts in the set and decide if it feels like a fair price for what you are getting. Let’s look at things a bit more objectively, comparing this set with the first two sets in the Postcards series.

As you can see, there is no metric in which this set can be considered a better value than the New York or Beijing sets. While the price-per-part is below the arbitrary $0.10 per piece metric often cited, the pieces are on average very small. The pieces in the Beijing set are even smaller on average, but that set contains 44% more pieces (85 more pieces), more than making up for the difference.

I’m honestly baffled by this one. It’s a strange departure from the four city-focused sets released so far in the Postcards series.

Here’s the thing, there’s nothing wrong with making a postcard set that’s not based on a city. What’s weird to me is that it is based on such an abstract place, instead of an iconic natural landmark such as Niagara Falls, the Grand Canyon, the Eiger, or if you want to do something based on Australia you could do something based on Uluru/Ayers Rock (although that might not be appreciated by indigenous Australian community), The Blue Mountains, or the Great Barrier Reef. 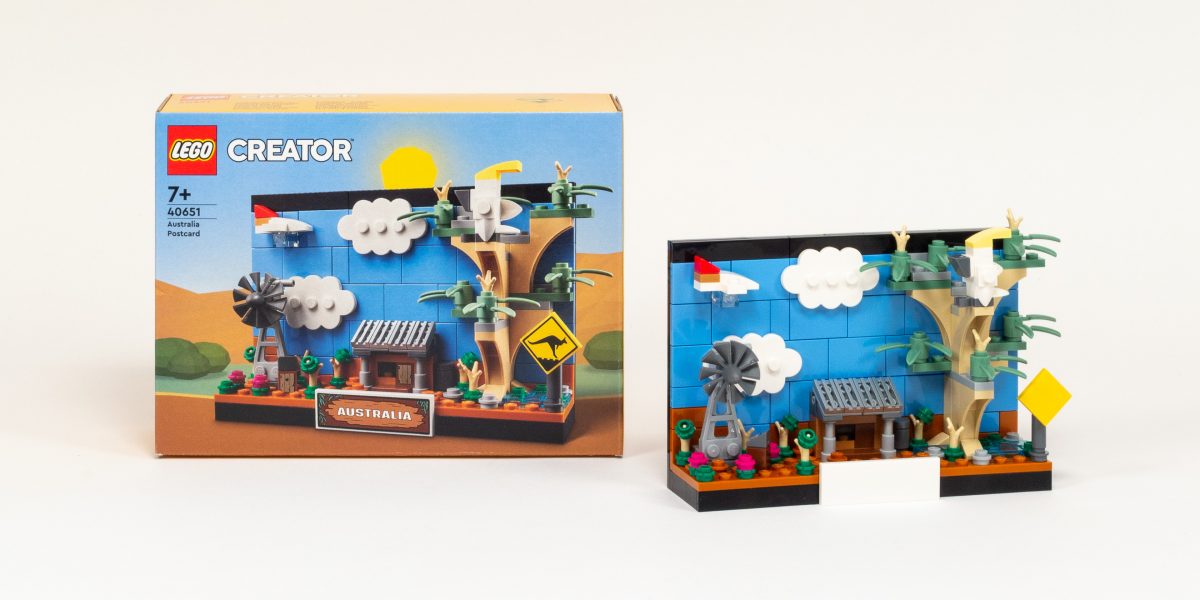 As noted earlier, the scale makes no sense – why is the cockatoo bigger than the shack, or the windmill is half the height of the tree? Worse still, it just doesn’t look all that appealing. While it’s evocative of the Australian outback, it just feels rough.

To be honest, I’m not impressed. The tree is pretty unattractive and it feels like a pretty dated, unflattering caricature of rural Australia. 191 pieces for $15 isn’t bad, but the price-per-gram is high, confirming that those 191 pieces are mostly small pieces. I like that they are trying something new for the postcard series, but this feels like a step backward. That’s why it only manages an “acceptable” (2/5 star) rating.

We’ve reviewed all four of the previous postcard sets, and only one rose above the rest (#40568 Paris Postcard). Feel free to check out our previous reviews to decide which one is best for your collection:

If you are a completionist or have a more positive impression of this set, feel free to add #40651 Australia Postcard to your collection in 2023.
The LEGO Group provided this set for the purposes of this review. The opinions in this article are strictly my own—providing sets for review does not guarantee a positive review. Photos in this article are by Tom Alphin unless otherwise noted. Visit the About page for more info about our journalistic standards and affiliate programs.