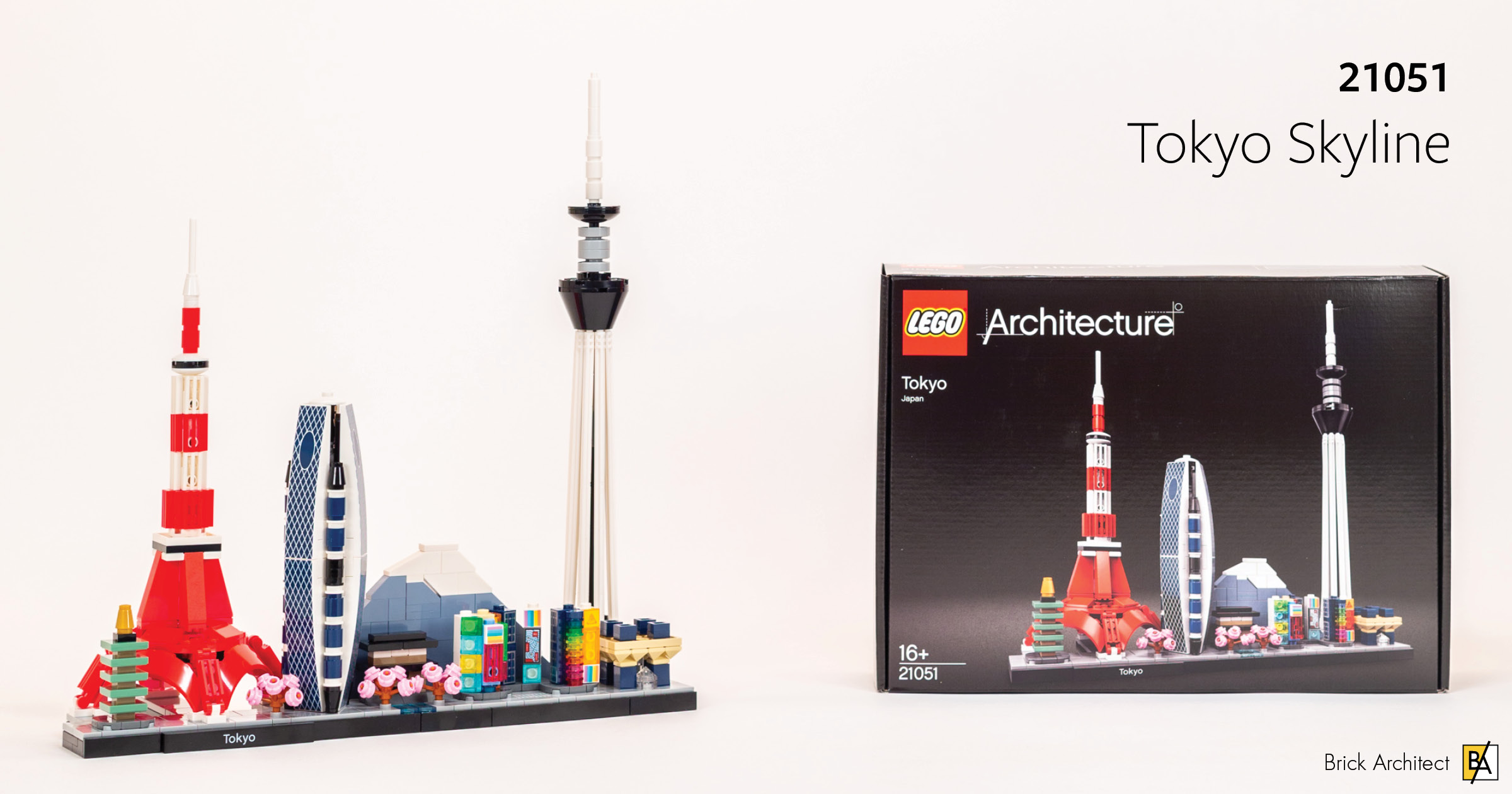 This brightly colored addition to the LEGO Architecture Skyline set is jam packed and includes a lot of printed parts, but how does it compare to other sets in the series?

2020 marks the 5th year of the LEGO Architecture Skyline series. In the first two years they released three sets, and each year since they have added just two cities to the series. Together with #21052 Dubai Skyline, these are the 11th and 12th models in the series.

(Excluding the alternate #21038 version of Las Vegas Skyline that we reviewed a few months ago.) 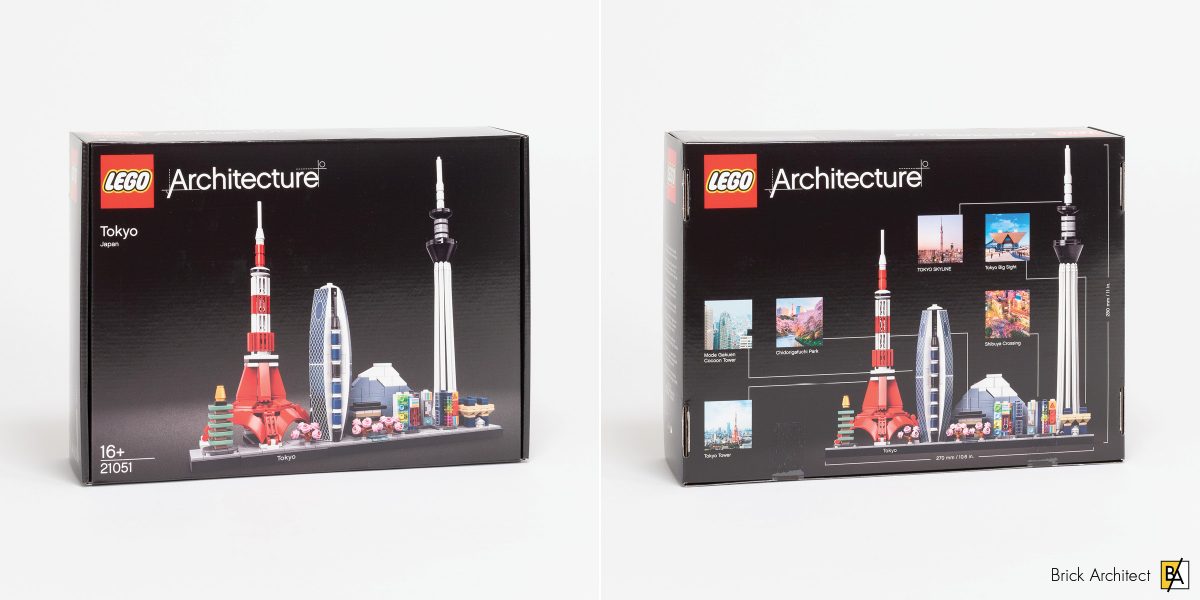 As reported in my earlier preview of the Dubai & Tokyo Skylines, my initial impression of the Tokyo model was largely positive. Despite never having visited Tokyo, I was immediately drawn to the bright colors and the staggered composition. It feels a bit cramped but is filled with energy, matching my stereotype of how the city looks in the media. The model includes eight distinct landmarks, more than any other set in the series except last year’s #21043 San Francisco Skyline.

When I looked a little closer, my impression became mixed. I was displeased by last year’s re-creation of the Eiffel Tower in #21044 Paris Skyline, and unfortunately the Tokyo Tower is designed in much the same way. (The similar building techniques has one advantage–the Tokyo and Paris skylines will look great when displayed next to one another.)

On the positive side, I also noticed a lot of intriguing printed parts featured this set (especially for the Mode Gakuen Cocoon Tower), which I look forward to discovering in more detail as we get into the review. Lastly, I was pleased to see some advanced building techniques, especially for the Tokyo Big Sight exhibition center.

This set is assembled across two stages. The first stage uses one large bag (with code 641H9), and one small bag (no visible number). They include parts to assemble the base, a small temple on the left, and the Tokyo Tower. 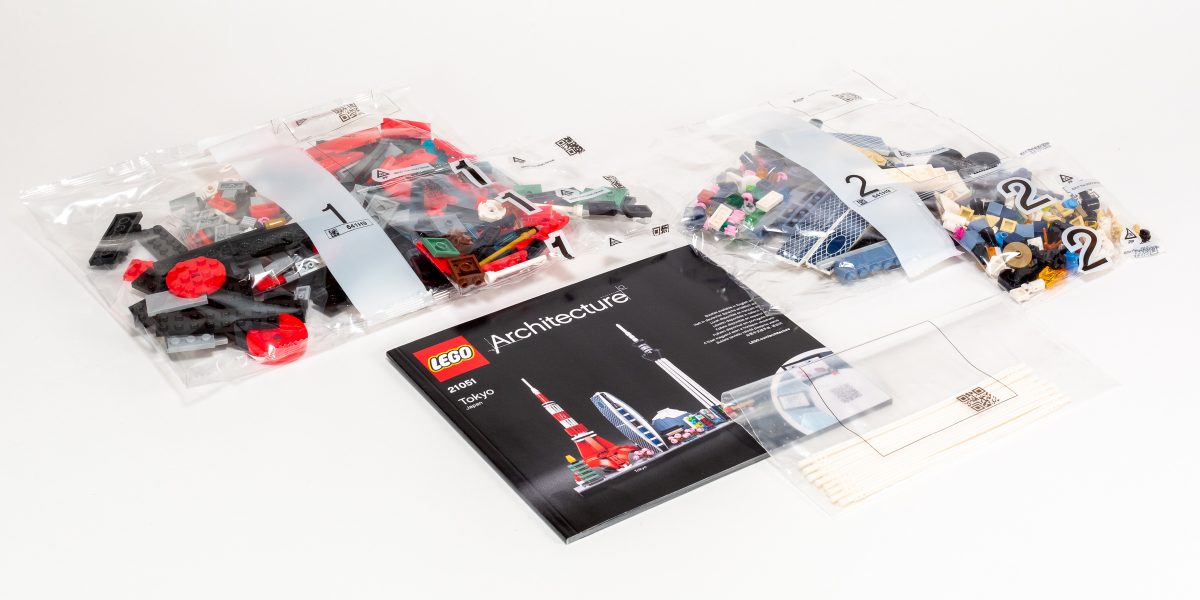 In the first bag, we build the base, followed by the Tokyo Tower, and a small temple on the far left side.

The base is typical of sets in the Skyline series, with a width of 34 studs and a depth ranging from 4 studs on the right and left side, to 12 studs deep to support the Tokyo Tower. This is deeper than most sets in the series, but not unheard of. (The similar #21044 Paris Skyline is 36×13 studs—two studs wider and one stud deeper.)

While the base is not overly complex, I did notice that 1×5 Rotor (part 32124) is used in two places, allowing buildings to be attached using a Technic Axle connection.

The LEGO re-creation of both towers loses most of their graceful curving shape, and retains none of the latticework that reminds me of fine handmade lace. The base is too wide, and I continue to find the use of four windscreen elements to be an inelegant facsimile for the base of the towers. I also dislike how the convex curve bulges at the transition to sloped bricks right above the four arches. 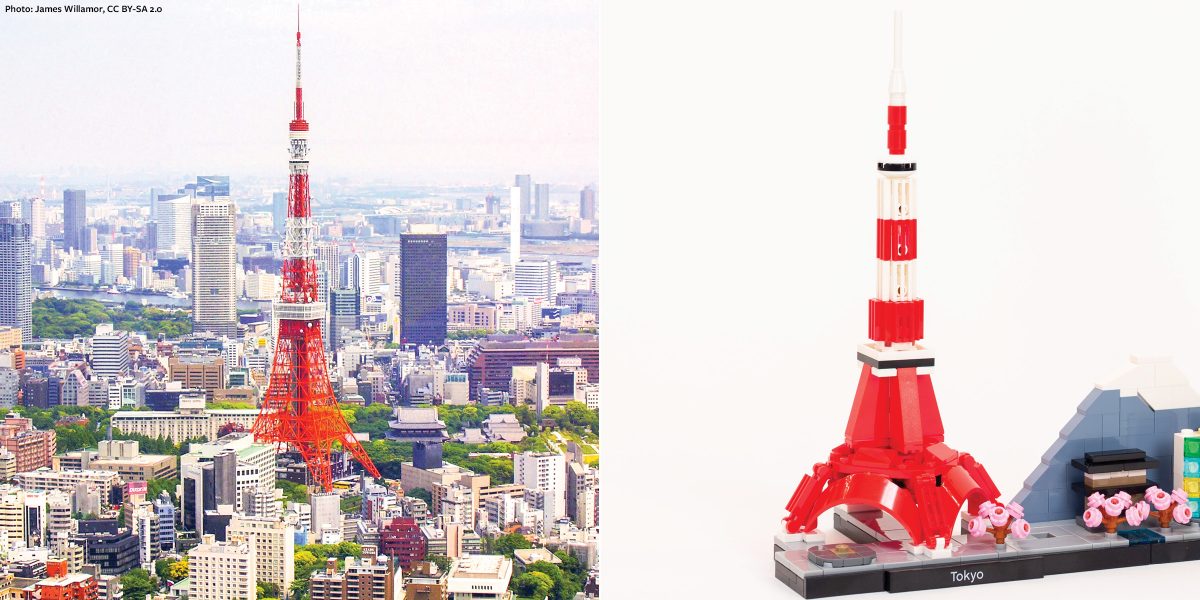 Thankfully, the alternating red and white sections are immediately recognizable as the Tokyo Tower, so at least it works as a representative object. Aside from the base which is too wide, the proportions are reasonably close to those of the real building.

A small unnamed pagoda appears on the left side of the Tokyo Tower. It is made using alternating 2×2 Jumpers (part 87580) in 151Sand Green and 1×1 Plate (part 3024) in 138Sand YellowDark Tan. Failing to attribute this pagoda to a specific building is upsetting to me, both because this is a missed opportunity to teach builders more about the city, and because it feels like an insincere gesture towards the region’s history. 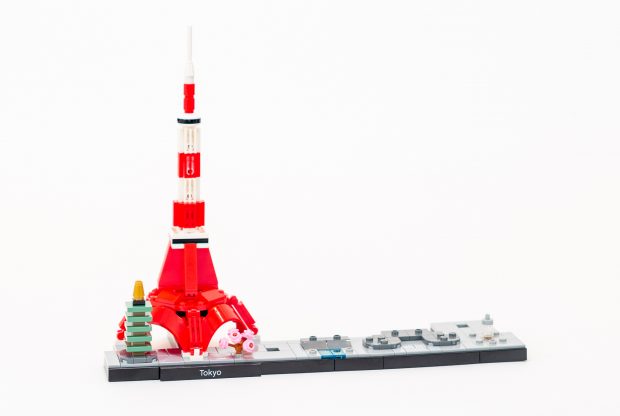 Progress at the end of Bag 1.

In the second bag, we assemble all of the remaining structures, completing the model.

Chidorigafuchi Park is famous for the cherry blossoms surrounding one of the twelve moats around the Imperial Palace. It is a popular place to rent boats during Hanami season in late March when the blossoms are at their peak. The moat bends around Chidorigafuchi Cemetery, where 350,000 unidentified casualties of World War II are interred. 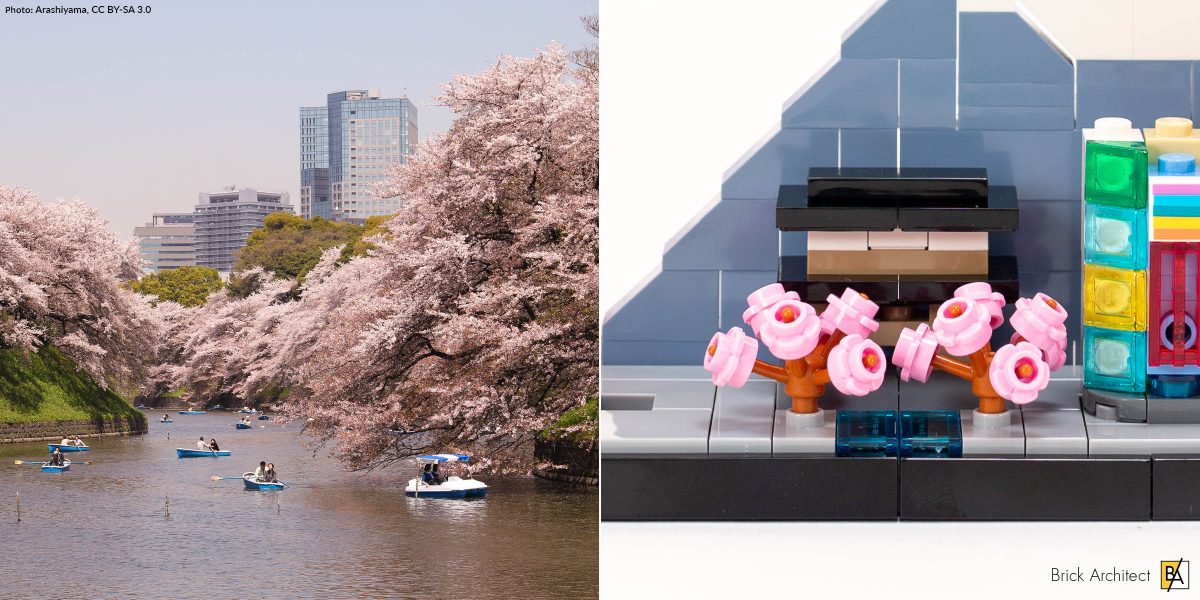 The LEGO re-creation involves a tiny re-creation of the Moat uses two 1×2 Tiles (part 3069b) in 42Transparent Light BlueTrans-Light Blue flanked on both sides by trees with 222Light PurpleBright Pink flowers. The small structure behind the water is not identified in the instruction booklet, and I was unable to determine a specific building it is meant to represent when researching buildings in the area. That’s too bad, since there are a dozen interesting buildings within the palace grounds that could have been included.

Neither the trees nor the small building are interesting to assemble, but the cherry blossom trees in particular add a lovely ambience and cheerful personality to the completed model.

Next, we get to build Shibuya Crossing, the high traffic intersection in front of the Shibuya Railway Station where traffic stops in all directions to allow pedestrians to cross in all directions at once. With so much traffic, there is no wonder why the buildings are covered with signs and displays—comparisons with New York’s Times Square are perfectly reasonable! 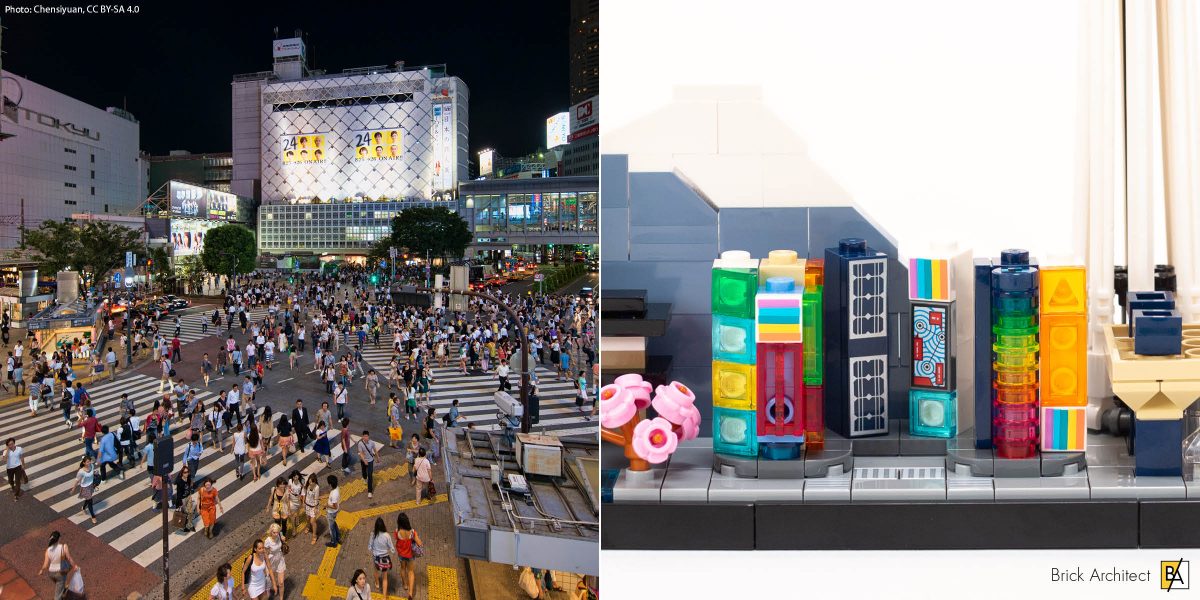 It is re-created using the widest array of different LEGO colors imaginable. Most notably, the right corner of the intersection is re-created using a stack of 1×1 round plates in 8 different transparent colors! It also uses 12 printed tiles (six different patterns) for the crosswalks and buildings—we will cover them in more detail later…

The end result is a tiny Technicolor cacophony. It exceeds the vibrance of photos of the real crossing, but captures the spirit. I was unable to attribute specific buildings in the model to real buildings in photographs, but it might be easier for people who have visited in person. I also wish that they did a custom printed tile for the crosswalks (zebra crossings), as the diagonal crosswalk is one of the most iconic aspects of this intersection, but is missing from the LEGO model. 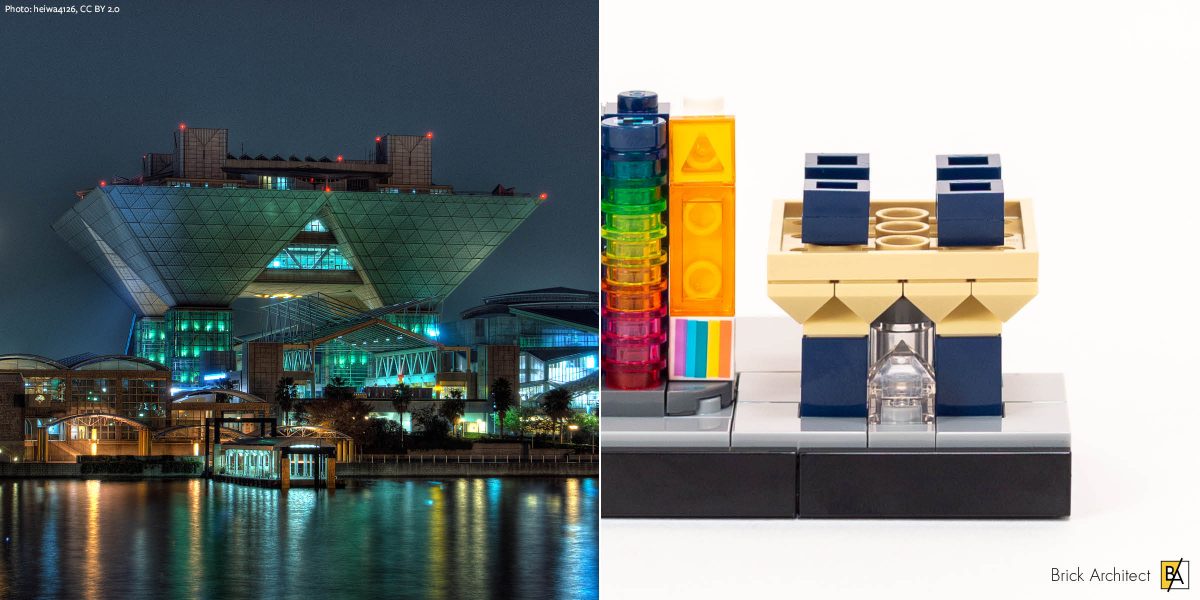 I was immediately impressed by the advanced building techniques used to re-create this with LEGO. The entire roof section is assembled, then flipped upside-down to attach with a single bar connection in the middle. The result is aesthetically pleasing and faithful to the source material.

I do not believe that LEGO Architecture sets should rely heavily on printed parts to make buildings recognizable. This feels like cheating, and it decreases the usefulness of the parts if you decide to disassemble the set and use the parts to build something else. 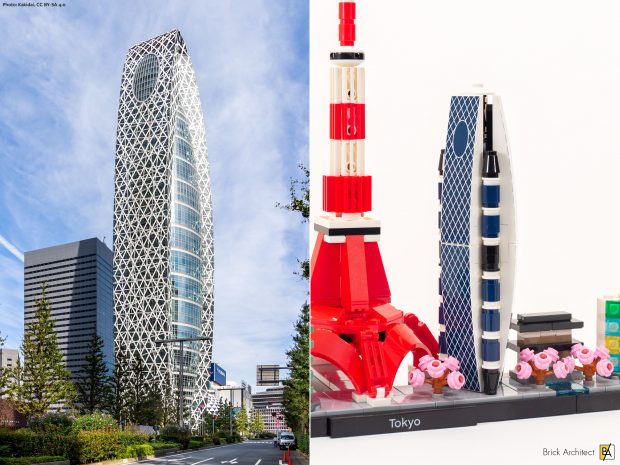 For this reason, I am especially displeased by this LEGO re-creation of the Mode Gakuen Cocoon Tower. I would have been much more impressed if they found a brick-built solution which did not reply on printed parts to achieve the unique shape. Nonetheless, it’s bulging shape is accurately captured using two 8×2 Curved (part 42918) pieces on each of the three sides.

In a departure for the Skyline series, an iconic natural landmark is included as part of the model. Mount Fuji is a 3776 m (12,388 ft) tall active volcano that’s just 65 miles southwest of Tokyo.

That’s really close to a major city! Mount Rainier is 105 miles from Seattle and 78 miles from Tacoma. 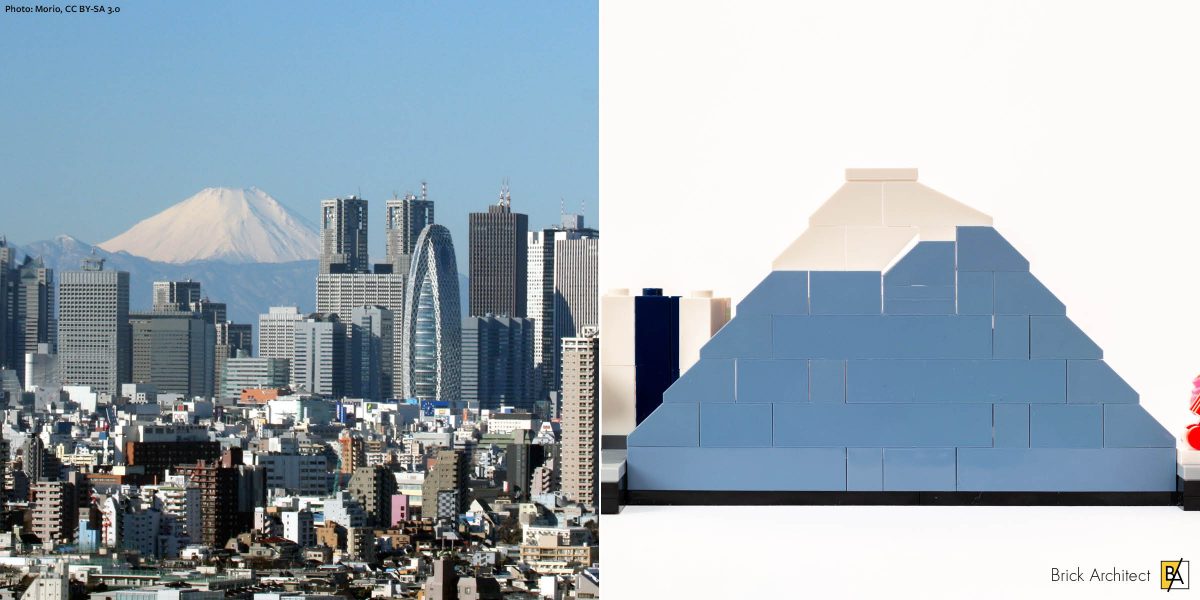 Unfortunately, the LEGO re-creation is not interesting, although it does establish an immediately recognizable backdrop for the model. The choice to create an uneven snowcap using both a 2×1 Slope and the 2×1 Slope, Inverted reveals a gap when viewed from the front. The gap is caused by historic idiosyncrasies in the LEGO system of parts (Most notably, the fact that slopes have about a ½ plate tall vertical section at the base before the slope begins. Those parts could be modified to line up better, either by increasing the vertical section to 1 plate tall or eliminating it completely.)

The last addition to the skyline is the Tokyo Skytree. The building is 634m tall and was completed in 2012. 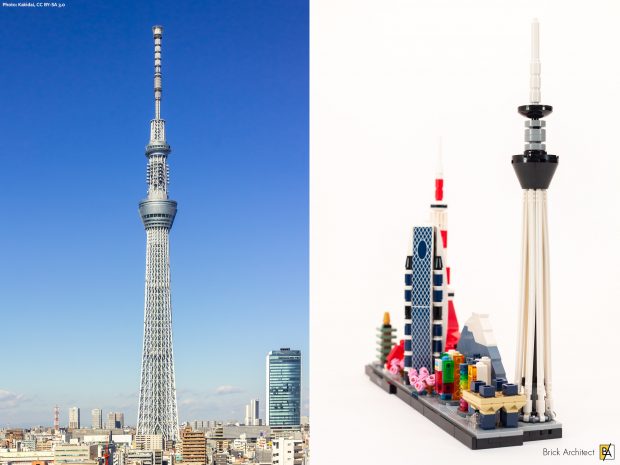 The top uses some inverted building techniques. The most interesting aspect is a technique that I’ve never seen before where the eight soft axle 19L (part 32235) elements are hidden in a collar at the top but are not attached to anything. This works reasonably well, although soft axle components are hard to keep straight, making it difficult to a make the legs look uniform.

While there are no new parts in this set, there are a few parts appearing in new colors for the first time.

The most striking aspect of the part selection is the sheer number of printed parts. This includes four new printed elements, and five existing printed parts. A total of 19 printed parts would be a lot for any set, and is much more than we’ve ever seen in the LEGO Architecture series.

I expected to really enjoy my trip to Tokyo through LEGO bricks, but was ultimately disappointed by the uninspired building techniques and over-reliance on printed parts. I disliked how the Eiffel Tower was handled in the Paris Skyline set, and continue to dislike the technique when applied to the Tokyo Tower. The only technically excellent model within the set is the Tokyo Skytree Convention Center, but it can’t carry the set since it is tiny and uses fewer than 30 pieces. 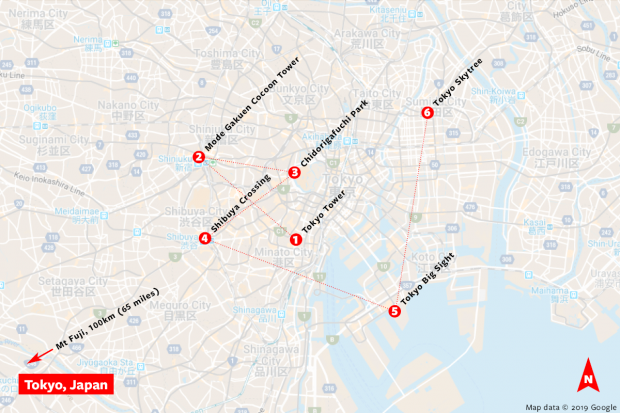 Map of Tokyo showing location of the various landmarks.

I’m similarly disappointed by the haphazard arrangement of structures in the LEGO Model. If the designers were serious about arranging the structures in a similar order to how they appear in the real city, they should have oriented the model facing toward the southwest where Mount Fuji is located, resulting in a completely different order of structures; with the Tokyo Big Sight on the far left and the Mode Gakuen Cocoon Tower on the far right. Complete disregard for the geography of the city adds to my disappointment with this model.

Despite serious misgivings about the individual elements within the model, the completed set is lighthearted, cheery, and will look good on your desk or bookshelf. While including Mount Fuji is a bit heavy-handed, it makes the model immediately recognizable. Lastly, it’s good to see more representation of cities outside of Europe and North America. 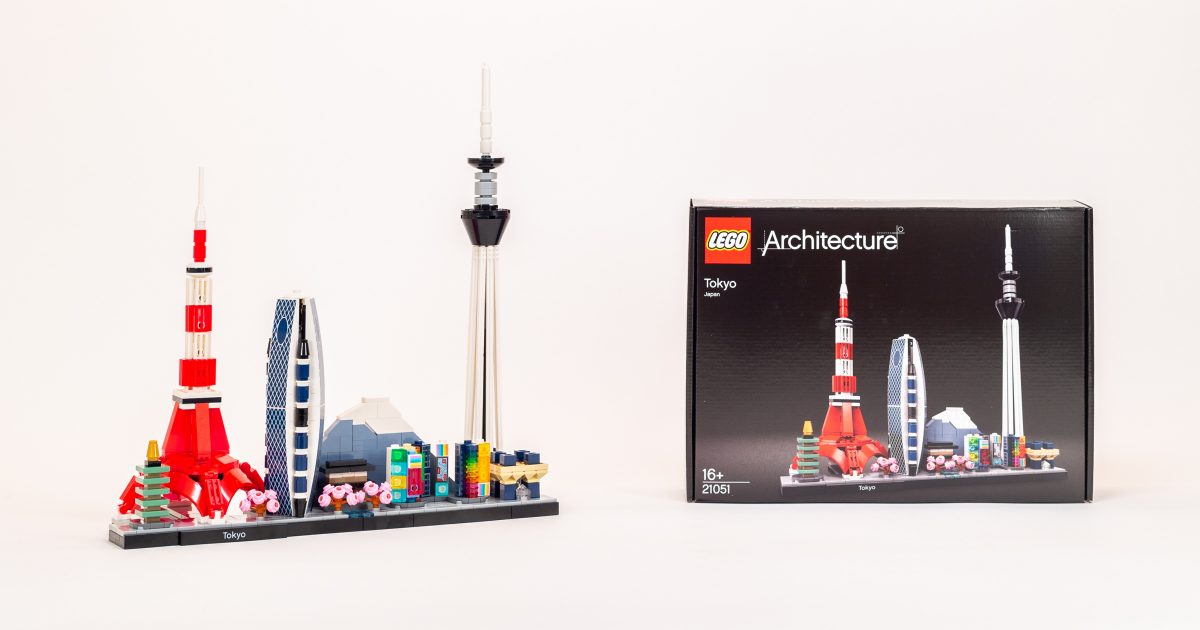 Because sets in the LEGO Architecture Skyline Series contain many structures in a single model, it is difficult to assign a single numeric rating to the set as a whole. In the case of #21051 Tokyo Skyline, I feel like The LEGO Group has not done their best work, and the resulting set only deserves an Acceptable (2/5 star) rating. It doesn’t help that the set is more expensive than similarly sized sets. Because the finished model is immediately recognizable and vibrant, I suspect many readers will still want to add it to their collection despite these misgivings.

What do you think about #21051 Tokyo Skyline—will you be adding it to your collection? Available now at LEGO.com!
The LEGO Group provided this set for the purposes of this review. The opinions in this article are strictly my own—providing sets for review does not guarantee a positive review. Photos in this article are by Tom Alphin unless otherwise noted. Visit the About page for more info about our journalistic standards and affiliate programs.