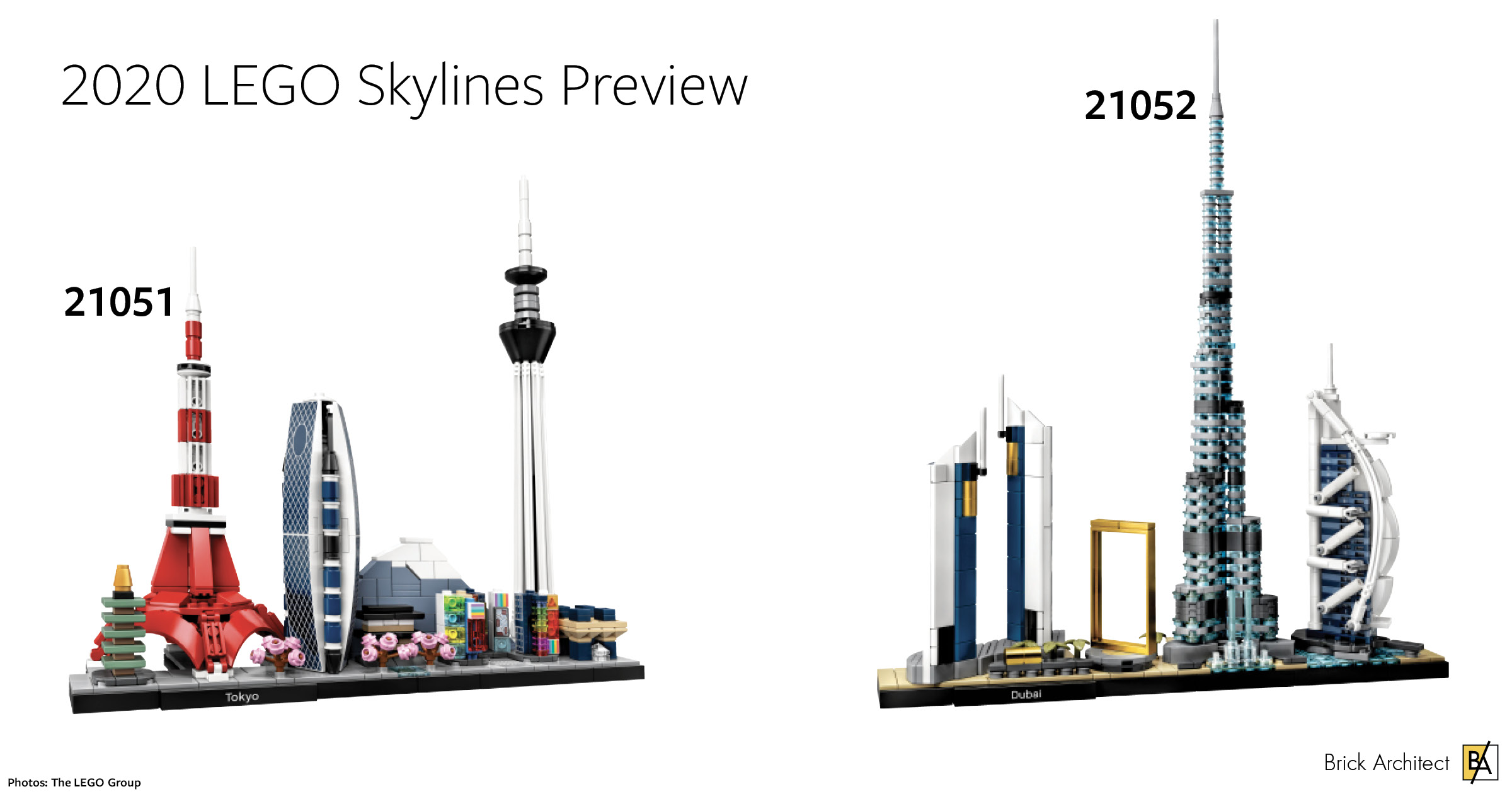 January 1, 2020: Brick Architect received preview copies of both of these sets… Be sure to read our reviews of #21052 Dubai Skyline & #21051 Tokyo Skyline sets, or buy them now at LEGO.com website.

Entering it’s fifth year, models in the Skyline series have slowly crept upward in part count and price. Following this trend, both sets are €59.99, with only 547 pieces in the Tokyo set, and a whopping 740 pieces in the Dubai set. (We’ll take a closer look at the part count discrepancy later in this article.)

By counting studs, I was able to confirm that the both have a base that is 34 studs wide. I’m certain that they exceed 4-studs deep in places, but can’t tell how deep they go based on these initial photos.

Let’s start with a closer look at the Tokyo Skyline set. Now I will start by admitting that I have never been to Tokyo, although I am familiar with it’s geography and landmarks as it is one of the most iconic cities in the world. 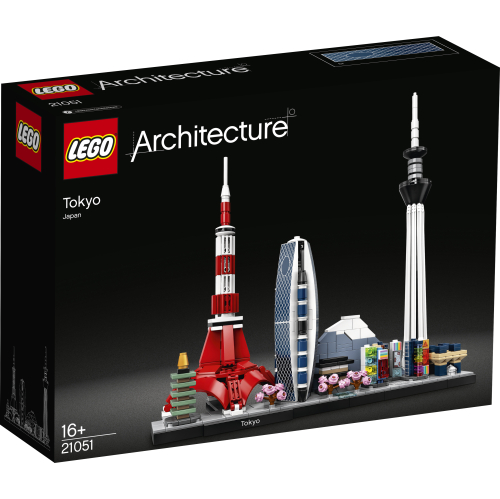 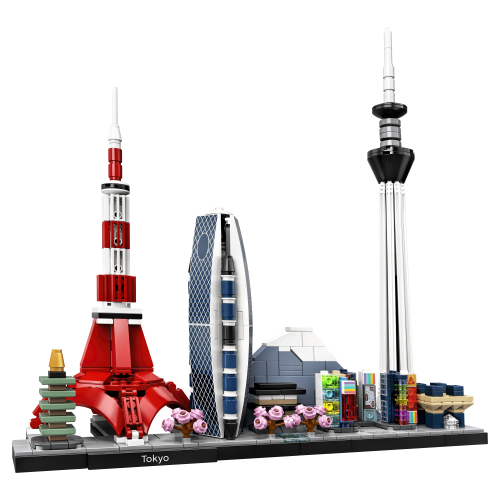 I was immediately drawn to the bright colors and the interestingly staggered composition. It feels a bit cramped but is filled with energy, which certainly matches my stereotype of the city. It includes eight distinct landmarks, more than any other set in the series except last year’s #21043 San Francisco Skyline.

A closer look at the photos reveals a little more about this model… One of the first observations was that the Tokyo Tower appears to be built using a very similar technique to the Eiffel Tower in last year’s #21044 Paris Skyline set. The main difference between the two buildings is that the Eiffel Tower has an open area between the lower and middle observation deck, whereas the Tokyo Tower has only two viewing decks and a tighter lattice. 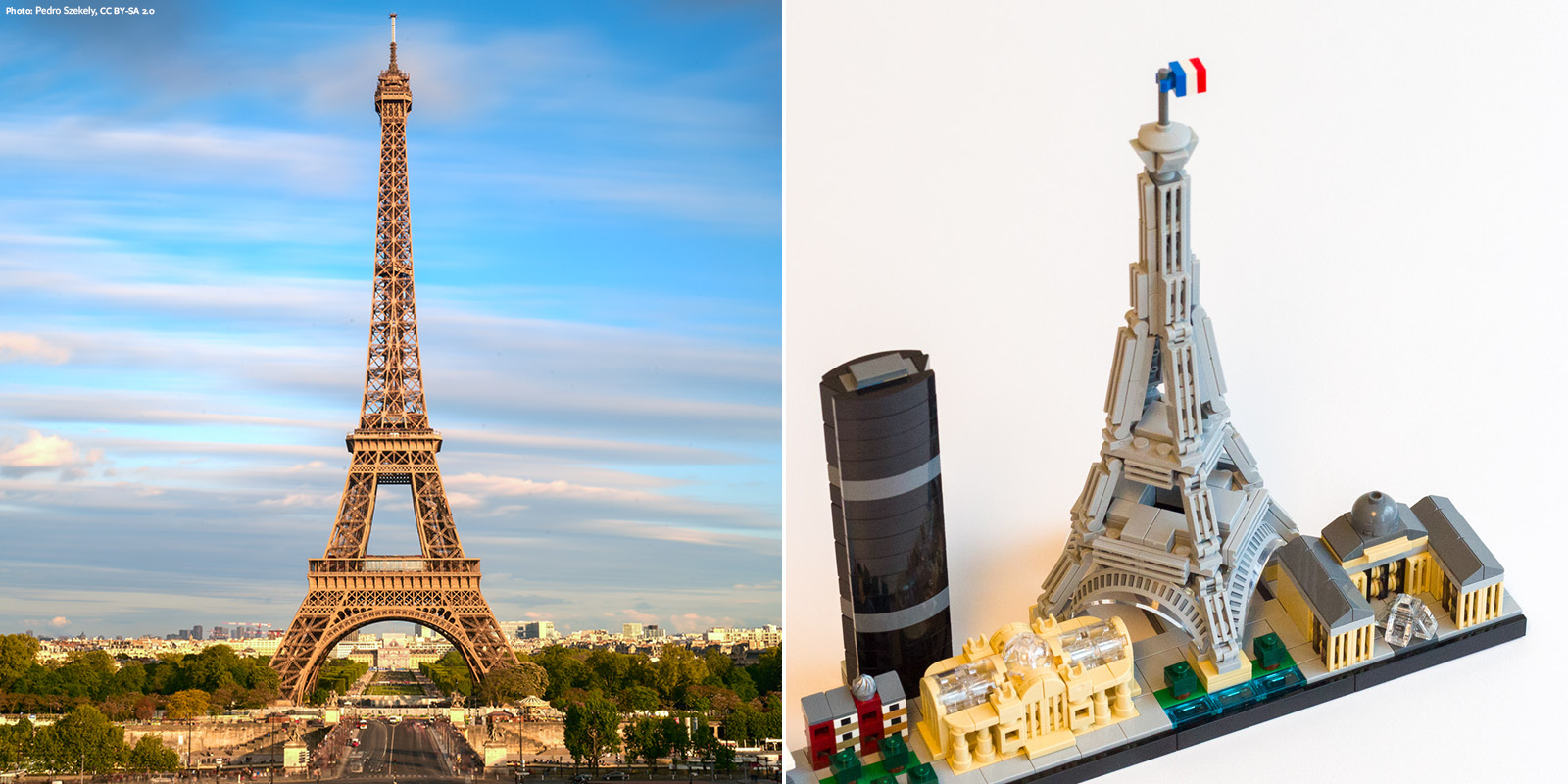 Unfortuately, I wasn’t impressed with the techniques used to build the Eiffel Tower, and my first impressions of the Tokyo tower are similarly negative. The elegance of both buildings come from the graceful curves and their open lattice construction, both of which are lost at this scale. (To be fair, I’m not saying that I could do a much better job at this scale.) 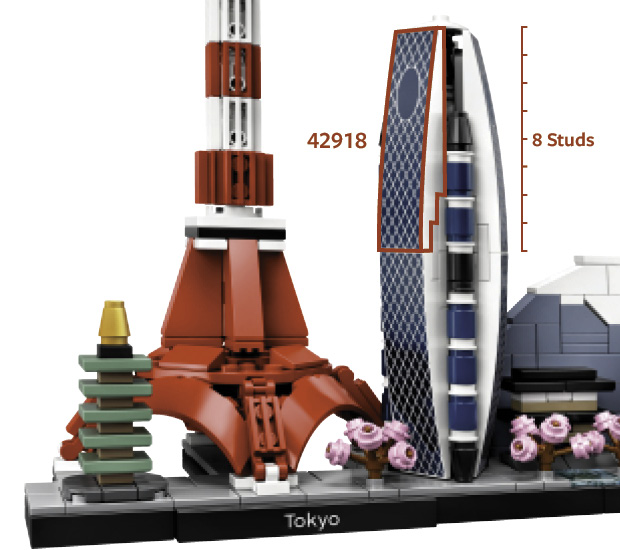 The second thing which stood out were the intricately printed tiles used to create the Mode Gakuen Cocoon Tower. Not only are these two interesting printed tiles (because the top and bottom have different patterns), but this is also a part which I wasn’t aware of… 8×2 Curved (part 42918) has appeared in just one set: 2019’s #10265 Ford Mustang.

In a relatively rare move, it looks like a printed tile from a previous set is being reused on this model. 1×1 Tile with Rainbow Colors Pattern (part 3070bpb133) was introduced in #21045 Trafalgar Square, and is being re-used in the Shibuya section of the Tokyo model.

I also noticed some creative parts usage on the Tokyo Big Sight Convention Center (far right). It looks like the roof assembly uses bricks which have been inverted, with 1×1 plates in 140Earth BlueDark Blue forming the four towers, and 1x1x⅔ Pyramids (part 22388) oriented upside-down to create the iconic flared roof design. I can’t tell how the roof assembly is attached to the base from the image, but I expect it will be a SNOT assembly in the middle of the building.

While I will hold my final judgement until building the set, I suspect that the final assesment will be similar to our review of #21043 San Francisco Skyline; an ultimately pleasing model despite misgivings about a few of the specific buildings. I also hope that it is less expensive than has been reported thus far… While the set does include some premium printed elements and larger pieces, this doesn’t justify a price well over 0.10$ per piece.

While I’ve never been to Tokyo, I had the pleasure of visiting Dubai in 2016. Unfortunately, 3.5 years is an eternity for a fast-growing city like Dubai, so I missed one of the landmarks featured in this interesting addition to the LEGO Architecture Skylines series because it wasn’t completed yet. 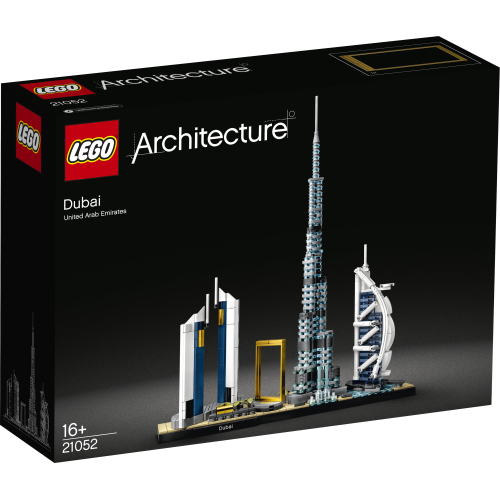 Unlike the Tokyo skyline which is packed with smaller structures, the Dubai skyline is a sprawling composition with just four landmarks. Having spent four days in the city, I can attest to the accuracy of this depiction—the city has some amazing architecture, but everything is really spread out, which makes it a difficult city to explore on foot (especially in the hot of summer; it was 111°F / 44°C when we were there!) 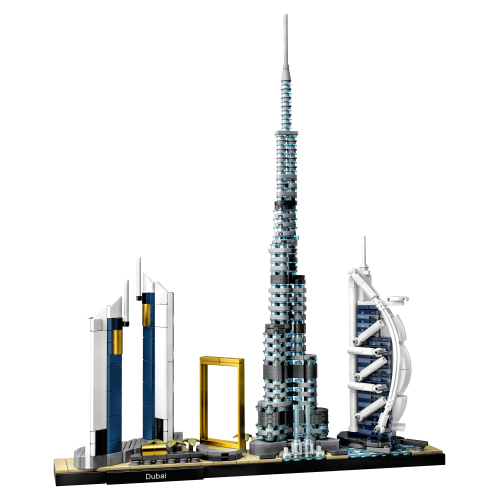 At first glance, I was concerned that the landmarks featured in the model were wildly out of scale to one another; I had a hard time believing that the Burj Al Arab was almost half as tall as the Burj Khalifa! Not to worry, I used the stacked plates of the Burj Khalifa to create a ruler and measured all four landmarks. 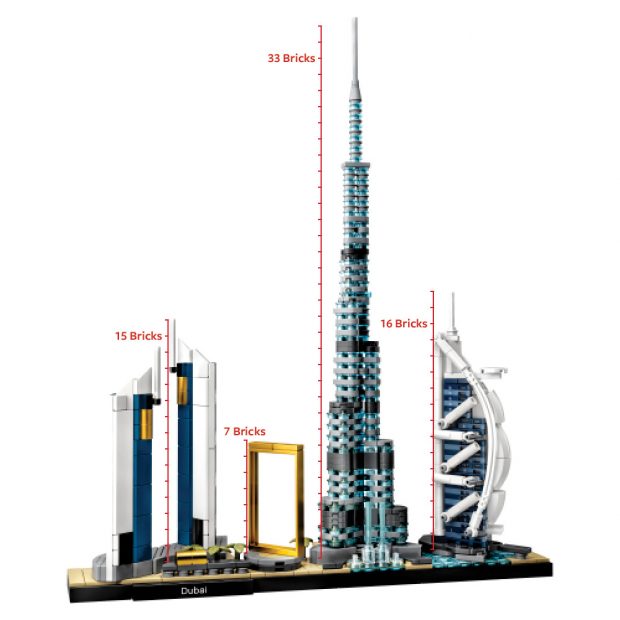 Rough measurements of the height of each landmark in #21052 Dubai Skyline.

While I haven’t calculated this for every model in the Skyline series, I ran these calculations for the first six models released in 2016 and 2017 in a previous article. An 8% average deviation (based on very rough measurements) is much better than average!

As for the landmarks themselves, the two most famous buildings in Dubai caught my attention first. Let’s start with the elegant sail-shaped Burj Al Arab on the far right. Especially after confirming that the scale is pretty accurate, I’m very happy to offer my respect to the set designers for a remarkably faithful small-scale re-creation of this unusually shaped building. 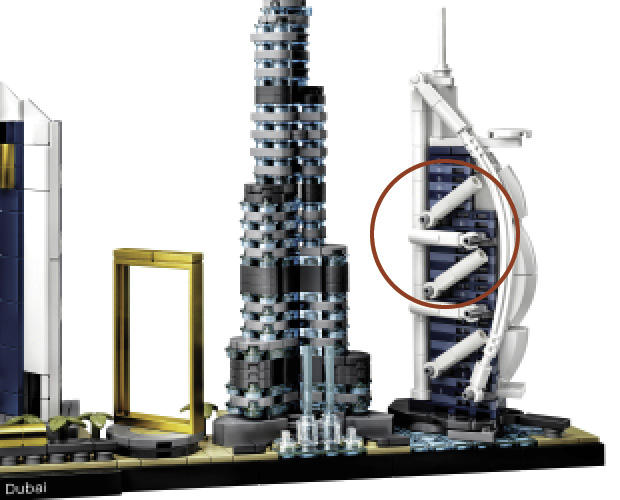 The LEGO Model uses Bar Holder w/ Clip (part 11090) and the new Candle (part 37762) to re-create the prominent exterior bracing which is visible in this icon of the high-tech architectural style. This is an effective solution made possible by new additions ot the part library. We will have to wait for our final review to confirm how the rest of the exterior is assembled, although it looks like four 2×2 Curved w/ Lip (part 30602) are involved.

I can attest to the Burj Al Arab’s beauty first hand. While staying at the hotel was out of our budget, we enjoyed their modern take on luxury during a High Tea service in the upper dining room. This allowed us to also experience interior design choices, the large triangular open atrium, and ride the elevators to the top floor. 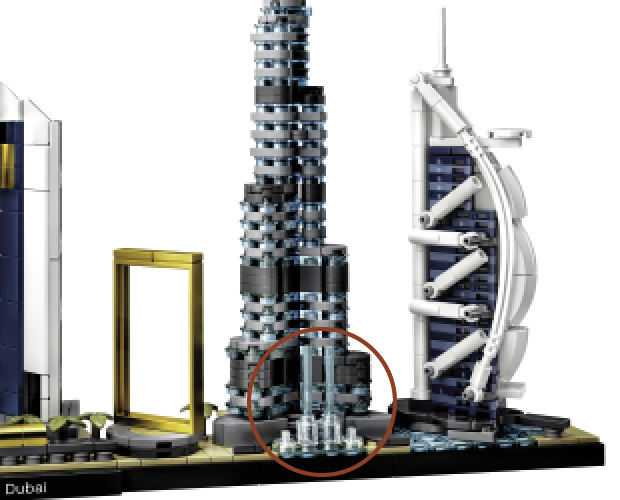 A fountain is included in front of the Burj Khalifa.

I’m afraid I will need to wait and see to offer too many comments on this LEGO re-creation of the tallest building in the world, The Burj Khalifa. From what little I can see, the model does capture the triangular arrangement of the base correctly, and the stair-pattern of setbacks look about right. I also like that they included the fountain in front of the building—this is a really nice detail that makes it more realistic.

I don’t have nearly as much to offer about the Jumeirah Emirates Towers, because it did not seem like an architecturally important building so I did not prioritize visiting it during my trip. (I don’t remember seeing it, even though it is right on Sheikh Zayed Road, and less than a mile from the Burj Khalifa.) As for the Dubai Frame, my only observation is that the real building appears to have a frame of the same thickness on all four sides, whereas the top of the LEGO model is more than twice as thick as the sides.

The Dubai Skyline is harder to assess based solely on these photos. It feels awfully sparse compared to other models like Tokyo, but this is also realistic. I’m impressed with how the Burj Al Arab was rendered, and need to wait and see how the Burj Khalifa looks in person. I suspect the Dubai Frame will prove to be an iconic addition to the model, but can’t speak to it’s prominence in the city as it is so new.

I look forward to building the Dubai Skyline to learn more about the building techniques which are used, and evaluate the model as a whole.