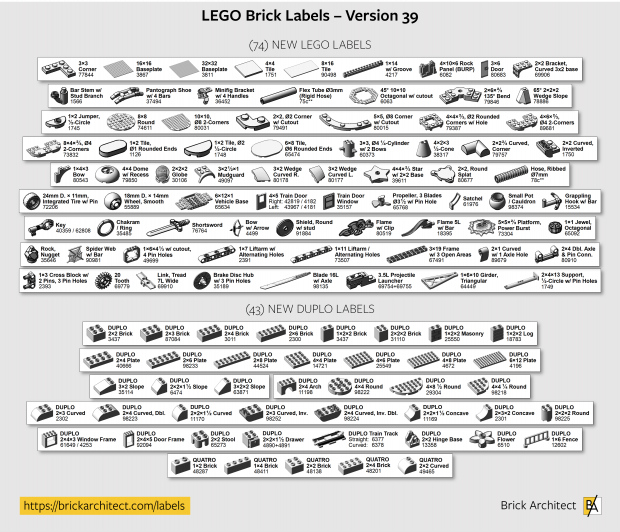 This update uses ‘Ø’ symbol instead of ‘Diameter’ or ‘Dia.’ to make labels for rounded parts more concise.

Learn more and download at brickarchitect.com/labels.
LEGO Brick Labels is updated regularly include the most popular new parts. You can support the LEGO Brick Labels project by donating at patreon.com!

I’ve reviewed every new LEGO part added in the second half of 2022, plus the top ~1250 Most Common LEGO Parts, and found a lot of great parts that I’m excited to to add to the collection!

There will be at least 51 new labels in the upcoming release.

Become a patron at patreon.com to download these new labels right now. Your support helps Brick Architect and the LEGO Brick Labels project in particular. Patrons can also access some behind-the-scenes content about how these labels are created.

Proposed improvements in this update

I am constantly trying to improve the short text descriptions for each part. With this update, I’m exploring the consistent use of diameter (Ø) indicators on many round parts. This is especially relevant when you have a large part with a rounded corner – knowing the diameter/radius of the corner will help you determine which parts to use above or below it. As you can see from the example image, this should also improve parts which already show a diameter (such as tires and wheels).

This is similar to how I started indicating the angle (°) for slopes in version 3.2… I do worry that awareness of ‘Ø’ as the symbol for Diameter is low. While it is certainly something people can learn, I do not want to introduce too much confusion.

This is a potentially major change, so FEEDBACK IS WELCOME! (You can email me or leave a comment.)

P.S. This change was inspired by some official LEGO part names which also use the “Ø” symbol. That symbol happens to be a letter in Danish, but it is also used in mathematical circles (pun intended) to mean diameter. 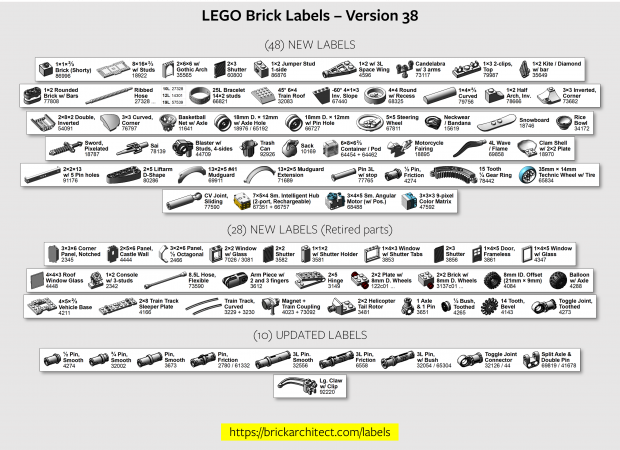 Want to celebrate this 80’s focused update?
Hop in your Delorean to revisit the decade of greed by exploring the Most Common LEGO Parts and Colors of the 1980’s

Learn more and download at brickarchitect.com/labels.
At least twice a year, LEGO Brick Labels is updated to include the most popular new parts. You can support the LEGO Brick Labels project by donating at patreon.com! 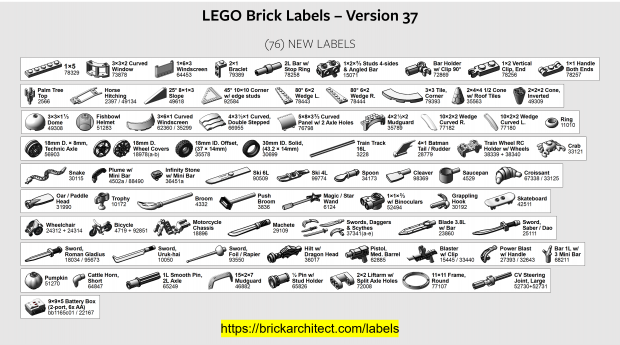 This update adds labels for 78 new parts to the LEGO Brick Labels collection! 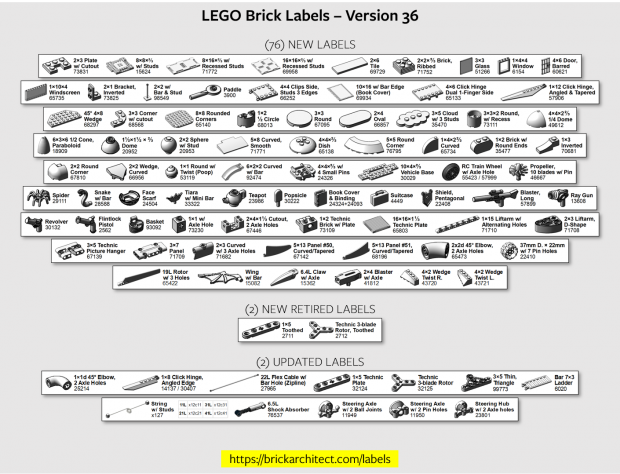 This is a very large update which reflects the continued evolution of the LEGO Brick Labels collection. It adds 77 new labels, for a total of 1340 unique parts! 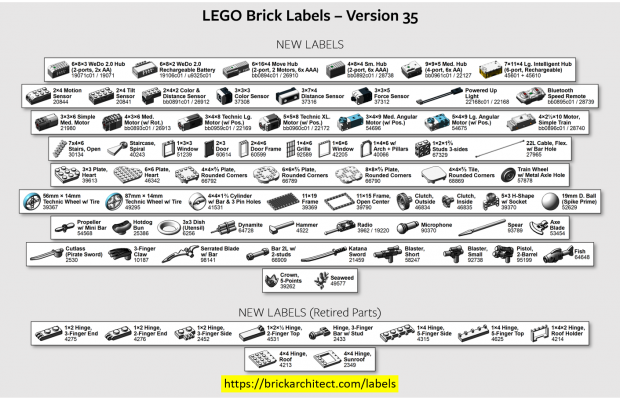 Every update include some of the most popular new parts, parts which have continued to grow in popularity over time, and some of the parts requested by Brick Architect readers like you. Thanks for your support!

LEGO Brick Labels is one of the most popular resources provided here at Brick Architect, but I hadn’t updated the page where you can download and learn more in 4 years!

Richard at The Rambling Brick just posted an interview about my LEGO Brick Labels collection.

In the interview, I explain how each label is made, the criteria for inclusion in the label collection, and challenges in designing great labels. You’ll also learn a bit about my favorite parts and colors, as well as my day job and some of my non-LEGO Hobbies.

I’ve also included popular new elements from late 2019 and a few extremely useful parts which were just introduced in 2020.

The new version includes 48 new labels, for a total of 1069 labels!

Version 3.1 focuses on two things: New parts released since last fall, and “common” parts which were missing from the collection. (This included a lot of propeller parts which are quite common, but were not included in the collection until now.)