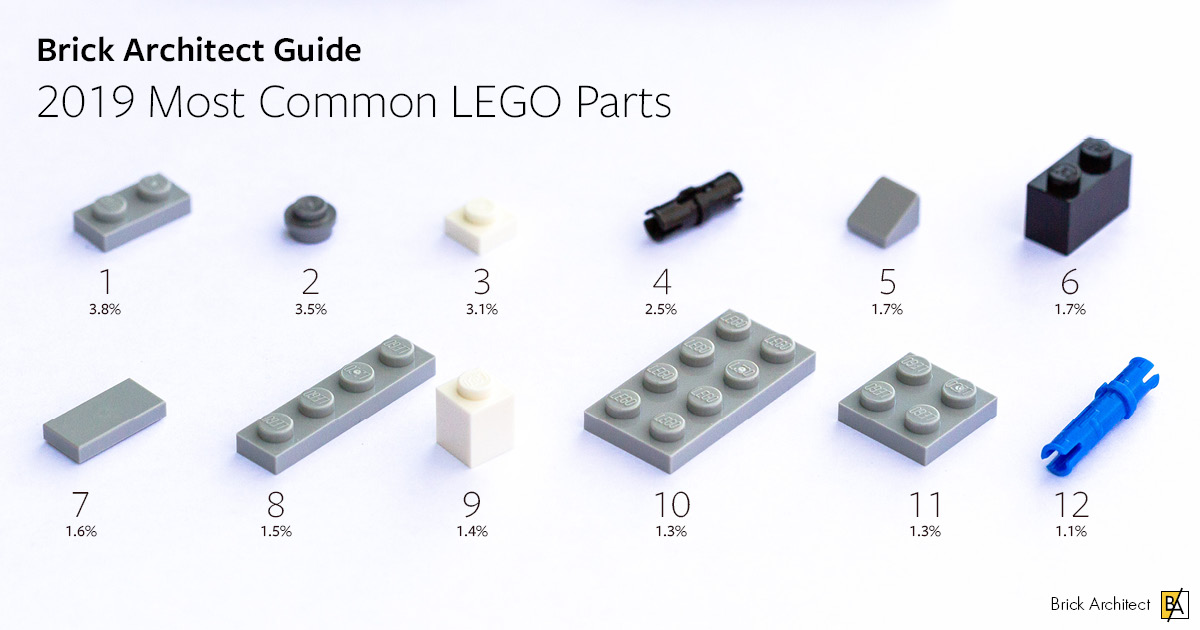 January 16, 2020: While I haven’t had a chance to publish a revised article for 2020, I re-calculated the 600 most common LEGO parts. (The top 50 parts featured on this page did not change very much.)

Which LEGO parts are the most common?

This seems like it would be an easy question, but The LEGO Group is a privately held company that doesn’t share detailed information about which pieces they manufacture or how many copies of each set are sold. In order to answer this question, we need to work with the limitations of the data that we do have.

Why does it matter?

There are a couple reasons that I wanted to know which LEGO parts are most common. The first is pretty obvious—I wanted to make sure my collection of printable LEGO Brick Labels includes labels for all of the most common parts.

The second reason is that this information helps me offer better advice in the LEGO Storage Guide. As you move from a medium to large collection, you might want to sort the most common pieces by part instead of broad categories. Likewise, as your collection grows from a large to a very large collection, these are the first parts you might choose to sort by element (both part and color).

The third reason requires a little more explanation… Last year’s most visited article Hard-to-Find LEGO Colors (and what to do about it) analyzed which LEGO colors are “Common” because they are available in almost every part, “Uncommon” because they are available in many but not all parts, and “Rare” because they are available in so few parts that you can only use them sparingly. For that article, I created a list of basic bricks, plates, and tiles that I felt were necessary to build interesting models, and used that list of parts to assess how common each color is. For the upcoming 2019 update to that article, I wanted to use data (instead of my instincts) to select the most common parts, and use those parts to judge how common each color is.

Beyond these practical reasons, I found the list of the most common parts really interesting, and I thought my readers would find it interesting too. In this article, we’ll take extra step and analyze the data to learn more about the building blocks of our hobby.

The analysis in this article is based on the idea that you purchased one of every LEGO set released in the past 5 years and sorted all the pieces by part. This isn’t a perfect representation of the distribution of LEGO elements which are currently being produced, but it offers a reasonable estimate. I selected a 5-year span, because many LEGO sets are available in stores for several years.

A few really popular sets like #10243 Parisian Restaurant are more than 5 years old and are still available in stores. Those sets would not be included in this analysis, but this is not a major problem since relatively few sets are available for more than 5 years.)

A more detailed explanation of the research methodology is included on a separate page showing a complete list of the top 600 LEGO parts (which was updated January 16, 2020).

The top 12 parts account for nearly 25% of all pieces manufactured. (Each part shown in it’s most common color.)

Even after trying to exclude printed parts, Minifigure parts, and Duplo pieces, you would have around 675,000 pieces if you purchased one of every set released from 2015-2019. That’s a respectable LEGO collection!

After adding up how many of each part you would get from each set, you end up with a long list of parts… I’ve included a list showing the Top 50 parts below. (The complete list of the Top 500 parts is on a different page to keep the page from loading too slowly.)

In addition to columns describing each part, you will find the number of pieces you would get if you bought one of every set, and the number of colors each part comes in. (Rows containing parts which come in 5 or fewer colors shown with light gray background.) You will also find the current rank, and the year-over-year change for that part (with +/- indicating increased/decreased popularity.)

Top 50 Parts by Number of Pieces

While there are well over a thousand unique molds, not all parts are created in equal quantities. The most common part is 1×2 plate (part 3023)—if you bought one of every set from that 5-year period, you would have over 25,000 of that part alone, accounting for 3.8% of your pieces.

By contast, there are many parts which are included in just one set. It’s amazing that they are willing to design and cast a mold to produce a part for just one set! (A lot of unique molds are created for Minifigures and accessories used in the popular Collectible Minifigure Series—It must be profitable!) 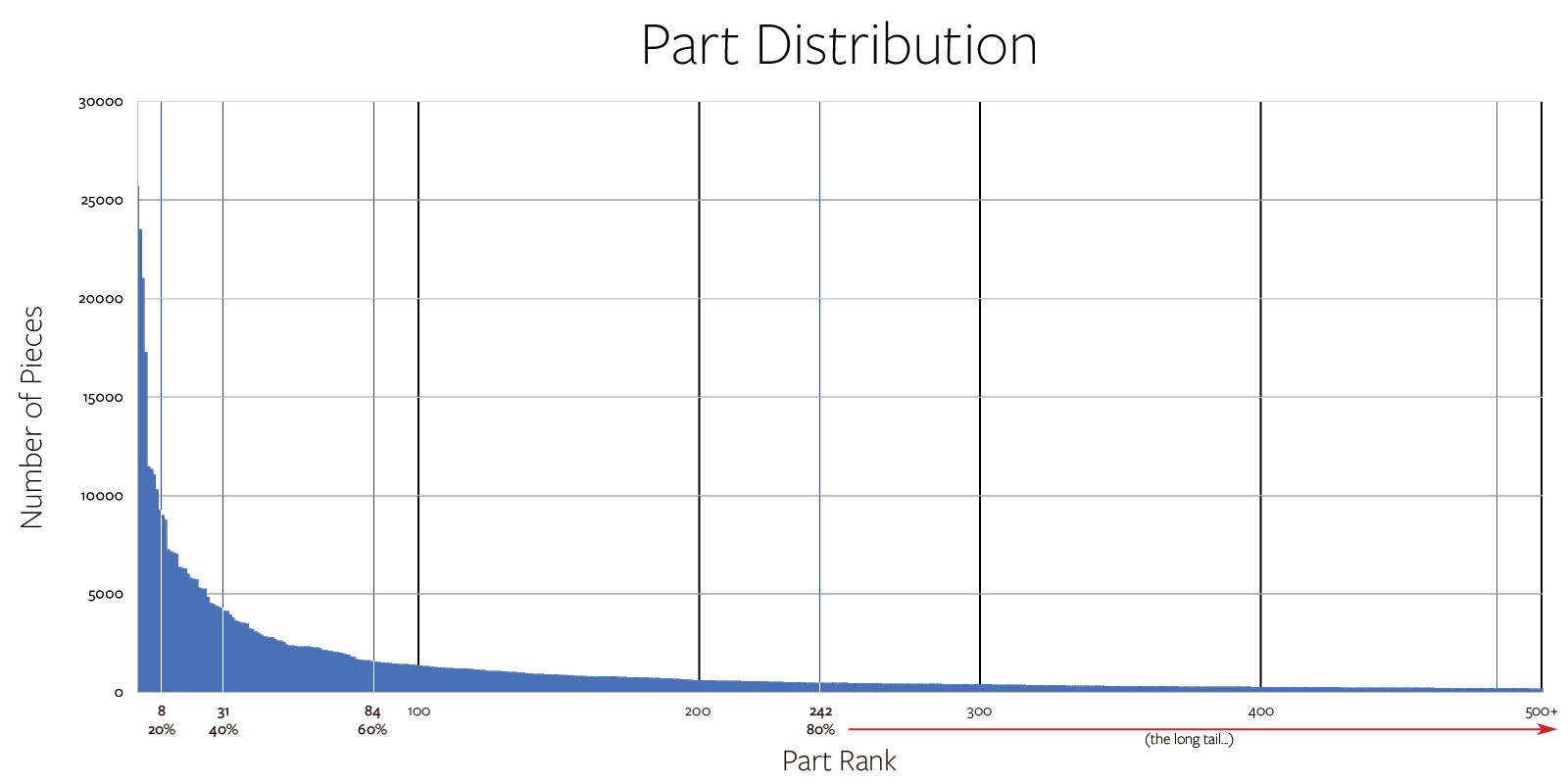 A small number of LEGO parts make up the vast majority of LEGO pieces manufactured.

When we look at this variability across a large pool of data, we are trying to understand its distribution. In cases like this where a relatively small number pieces of make up the bulk of the collection, we describe the data as having a long-tail distribution.

The bad news is that the long tail is quite long; In the chart, I only showed the top 500 pieces, but there are thousands more pieces extending off the right side of the chart. There are thousands of unique parts in production, and that’s not including printed parts, minifigures, and retired parts. If you aren’t careful, you will have a lot of tiny drawers with just a single part in it.

The current LEGO palette includes 41 solid colors, 14 transparent, 8 metallic, 1 glow-in-the-dark white, and 2 transparent with glitter, for a total of 66 colors. This includes the addition of 353Vibrant CoralCoral this year, and last year’s re-introduction of 107Bright Bluish GreenDark Turquoise / Teal.

Some parts are available in a lot of colors and some parts are only in one or a few colors. Typically, parts which are only in one color are functional or connective parts that are not very visible in a finished model. The best example of this are Technic pins and axles which are generally only one color to aid in sorting and finding the right piece well building a model. To help in reading the part list below, you will find that parts which appear in five or fewer colors are shown with a light gray background.

In a different article, we will look at which colors are most common, but I did want to highlight those parts which are available in the most different colors.

Top 25 Parts by Number of Colors

Additional Considerations: It important to note that in a few rare cases, a different part ID is used when nearly the same element is made using solid versus transparent plastic. This can make those parts appear to come in fewer colors than they really do.

An evolving library of parts

In addition to offering a detailed list of the most common parts, I took the extra step of comparing how common the part is based on the last five years versus a window starting one year earlier. When a part has significantly increased or decreased in the rankings, this reflects a shift towards important new parts and away from parts which are not as widely used anymore.

Increase or decrease is measured as a percentage of current ranking, rather than the number of steps it went up or down. This is due to the fact that it’s much harder to go up by one step near the top than lower in the rankings.

Parts that increased or decreased in popularity in 2019.

31 pieces jumped up in the rankings by 20% or more, and 67 pieces jumped by 10% or more. Most of these are relatively new pieces that filled an obvious gap in the LEGO parts library. Because they are general-purpose parts, they were quickly adopted by LEGO set designers and can be found in many new sets.

While are lots of pieces which have gone down a few positions in the ranking, just 28 pieces have decreased in the rankings by 10% or more. That’s a lot fewer pieces than those which increased by the same percentage.

It makes sense that new elements gain popularity quickly as they are included in a lot of new sets, but fade out of popularity much more slowly as building styles evolve over time.

The LEGO community gets really excited about the introduction of new parts, but barely notices when older parts are retired. I guess you can say that the “cult of the new” is real for LEGO fans.

If you enjoyed this article, you might also enjoy… Learn 7 styles of architecture using LEGO. The book includes a brief history of each style, photos of amazing buildings to use for inspiration, and instructions to get started. Written by Brick Architect founder Tom Alphin.

4.7 Stars at Amazon, and available in 10 languages. Get Organized! My LEGO Storage Guide offers in-depth suggestions to organize, sort, and store a LEGO collection of any size. Be sure to take a look, as there are some great storage rpducts for the LEGO Lover on your shopping list.

See how a well organized LEGO collection can unlock creativity! 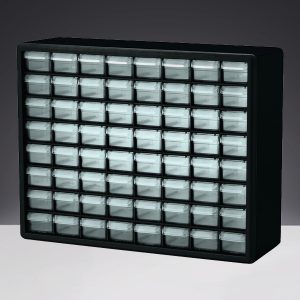 Plastic drawer cabinets by Akro-Mils are the top pick for most LEGO enthusiasts in the USA. The drawers are easily removed and stack-able, deep enough for 16-stud bricks, flexible which makes them durable, and competitively priced.

Add printable LEGO Brick Labels for the ultimate in organization!

I was surprised to learn that the #1 piece accounts for 3.7% of parts produced, and the top 50 parts account for 50% of the parts which are produced. While I already knew that LEGO parts followed a long-tail distribution, I continue to be amazed by their willingness to create new parts which aren’t used very often. The only way it makes sense to design and create specialty molds which are used for only a few sets is if they have learned how to make high-quality molds much more cheaply that I was led to believe, or if they are making a ton of money from sets with specialy parts. (Both are likely true.)

I was also surprised to see how quickly new parts enter the mainstream… Every year, the LEGO Group introduces a few parts which are so useful that they get used in a ton of sets. While the changes in a single year caused by new System and Technic parts is fairly small, the change over a period of 5-10 years is remarkable. It’s hard to imagine building LEGO models without classic bricks and plates, as well as new classics like the 2×2 Jumper or 1×2 brackets. In the near future, people will look at parts like 1 x 2 Rounded with 2 Open Studs in the same way—how did LEGO builders live without it?

If you enjoyed this article and want to keep up with your latest reporting, join our mailing list! Do you have other questions about LEGO that could be answered by analyzing the data? Let me know—leave a comment below!

Here at Brick Architect, were always looking for the next great content. This includes detailed reviews of new sets, LEGO Storage ideas, and in-depth articles like this one.