This month was dominated by writing several LEGO set reviews, but one of them loomed a lot taller than the others. I hope you had a chance to read my extremely detailed and critical look at the new #10307 Eiffel Tower set. We also looked at two much smaller gift-with-purchase sets. (You will receive both for free if you buy the Eiffel Tower soon).

Beyond reviewing new LEGO sets, I finally published a sprawling interview of almost the entire LEGO Masters USA Season 3 cast. This was the result of more than two months of research, interviews with them via Zoom, meeting many of them at BrickCon in October, and a written interview. To make the story even better, many of them included great photos to bring their personal stories to life.

I’ve also updated my popular Most Common LEGO Parts article to reflect (most of) the sets released this year. I love doing this analysis about once a year, as it gives me insight into specific parts that are gaining or losing popularity over time, but also broader trends within the LEGO ecosystem of parts.

Here are a few of the trends I’ve observed this year:

It was also interesting to observe the impact of a single set on the rankings; #10307 Eiffel Tower alone is responsible for doubling the popularity of one part: Bar 2L w/ Stop (part 78258).

Be sure to take a deeper dive into the Most Common LEGO Parts, and let me know what you see in the data!

This month, BrickNerd published a story so big that it took three articles to tell — Are Heiseldal conducted an extensive interview with one of the most pivotal figures in The LEGO Group’s evolution to embrace their Adult Fans. I encourage you to read the whole article, but wanted to highlight a few excerpts from this lengthy discussion following his retirement after 39 years at the company. 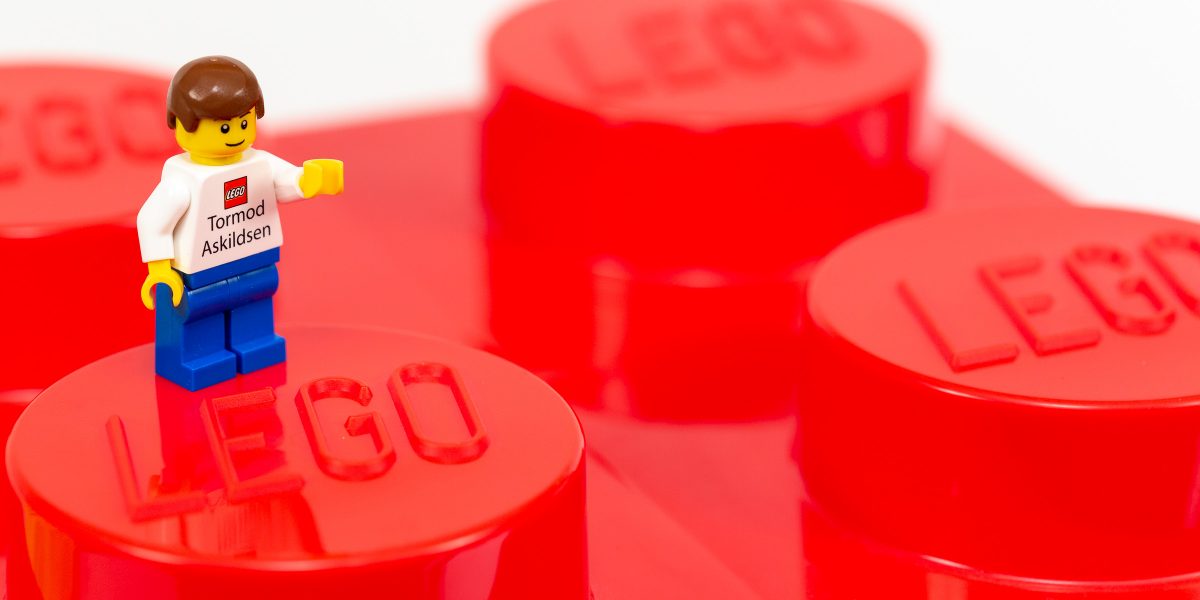 I’m honored to have a Tormod Minifigure in my small collection of LEGO employee ‘business cards’.

In the first part, I enjoyed learning that he only landed at The LEGO Group because his wife got a job in Billund and he found a marketing role in the LEGO DACTA (now LEGO Education) department in 1983. His involvement with very early LEGO robotics products for the Education market will become a lot more relevant when we jump forward to his involvement in LEGO Mindstorms which shipped in 1998. (You will find several interestng anecdotes about the Mindstorm days in part 1 of the BrickNerd Article.)

These people, you see, were doing things that we were not so happy about—modifying the source code, developing their own software and so on. So our plan was to explain to them why they could not do that!

The relevant part for the AFOL community is what happened next: They discovered that a huge number of Mindstorms sets were being purchased by Adults, and they discovered that some very enterprising fans had reverse-engineered the software. The decision to fight these ‘hackers’ or embrace them was not obvious at the time, but the ultimate decision to learn from them rather than fight them planted the seeds for future engagement between the company and Adult fans.

Soon thereafter, Tormod became involved in LEGO Direct, a precursor to LEGO Ideas where models designed by AFOLs were turned into real LEGO Sets. By 2002, they had created an internal document about “LEGO Enthusiast Communities”.

Our white paper was basically about what the fan community was, what we could do, what we thought we should not do, and what they wanted and needed. Plus, why were they even there, and who were they, really?

The second installment goes on to explain how a comic book titled “AFOLs” was created to help LEGO Employees understand the growing audience of Adult consumers. It also touches on the genuine failure to validate the changes to light and dark gray with the AFOL community, and the very first LEGO Inside Tour.

In 2000, [Christina Hitchcock] organised the first BrickFest—at George Mason University in Washington, D.C.—and to me, that is the first time a real AFOL event came together.

The bulk of the second article is about both the organic ways that the AFOL community grew (such as the BrickFest in 2000), as well as the ways that The LEGO Group helped learn from the AFOL community through programs like the LEGO Ambassador program. This chapter wraps up with a lengthy discussion of the companies challenges in 2005, and how Jørgen Vig Knudstorp took over the helm from Kjeld and helped steer the company to a better place — and how the AFOL community helped inform their strategy.

Internally, people were referring to fans as ‘nerds’. They said they wanted to market LEGO products to ‘ordinary’ people as well, ordinary kids and adults.

In the third installment, we learn how the failure of Galidor led the company to look harder at their original audience of kids as well. Fortunately, they were able to show that LEGO building products appealed to a broad cross-section of kids, and the same was true for many of their adult fans as well. In fact, they leaned in to those adult builders again in 2006 to launch more fan-designed sets under the LEGO Factory branding.

It was a personal high for me when the target group was extended to include adults, and the 18+ portfolio was introduced.

The lengthy interview closes with some more recent history that may be more familiar to you, including their early forays into Social Media, the decision to purchase BrickLink in 2019, and the launch of the “Adults Welcome” / 18+ branding in 2020. We should all be so lucky as to retire from a job we loved having just achieved a decades-long goal.

I met Tormod during 2018 LEGO Fan Media Days, and can vouch for his earnestness, intelligence, and unflinching support for Adult Fans of LEGO — his support will be missed!

The interviews with Tormod discussed above dovetail nicely with something else I’m reading right now — The newly released book The LEGO Story: How a Little Toy Sparked the World’s Imagination. 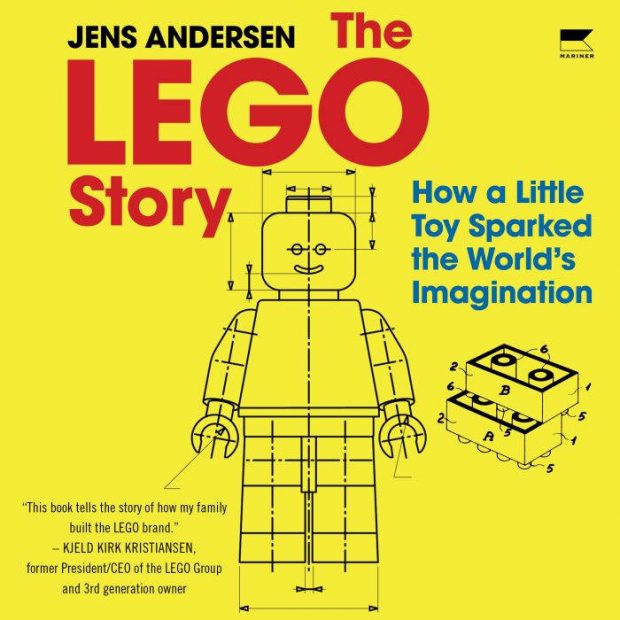 The LEGO Story, by Jens Andersen. Available in Hardcover or Audiobook.

I’m only halfway through the book, but I’m especially enjoying hearing a lot more of Kjeld’s voice in the latter chapters. (Author Jens Andersen had ‘unlimited’ acess to the LEGO Group vault and to third generation family owner Kjeld Kirk Kristiansen when writing the book.) Full review to follow, but so far I’m finding that the book strikes a unique balance between a history, a biography, and a business text. 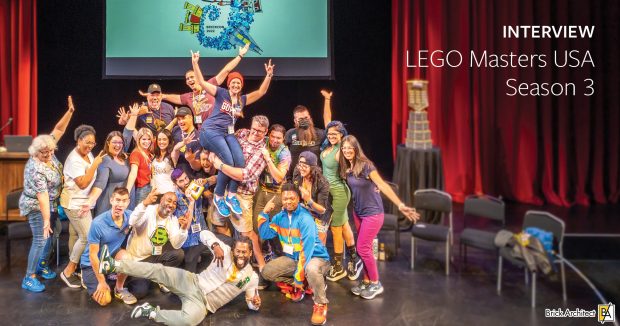 I also wanted to mention that my next update to LEGO Brick Labels is coming soon. In the process of updating my Most Common LEGO Parts article, I’ve already created about two dozen labels for parts which have gained enough popularity to be in the top 1200 most common parts. The final update will likely include even more new labels!

Some of the best photos of LEGO models not only include technical wizardry, but manage to capture motion within a still image. Okay Yaramanoglu brought an amazing LEGO to life by carefully editing in the perfect backdrop and the illusion of smoke and propeller movement. 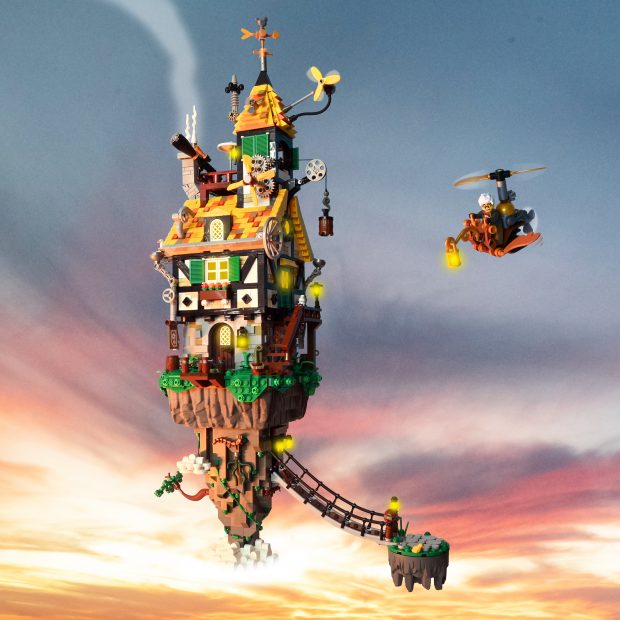 The Inventor’s House, by Okay Yaramanoglu.

Upon a closer look, you might notice that the bottom of the model is built upside-down, with a raised baseplate carefully attached to the underside of the building. “The biggest challenge was stability as I needed to figure out how to balance such a large MOC on a small point, which is why I decided to use a cloud as a stand.” Further, Okay explains “you will notice details like the gutters for collecting water and the small vegetable garden in the back for food.”

The parts are weird, but are designed by talented designers and produced by LEGO standards … There is not much to build, but once assembled, the playability is very high if you like action figures.

The seals on them are not waterproof. … in the event of an unudation with floodwaters, they cannot be relied on to keep your elements clean and dry.

Our friends at BrickNerd not only published the epic 3-part article about Tormod that I featured at the top, but shared a wealth of other great content this month. Why so much awesome content? Chief Nerd Dave Schefcik explained to me that they have been saving some of their nerdiest content for this month — Hope you had a happy NerdVember!

This month I’ve highlighted episodes from podcasts that I don’t usually highlight, because they managed to touch on the LEGO Hobby, toys in general, and the role of product reviews. Enjoy.

Brick Architect in the news

Thanks for reading our November LEGO News Roundup. Don’t want to miss anything? Subscribe to the Brick Architect mailinglist to receive the latest LEGO news in your email!